Caroline Heller is the author of the book Reading Claudius: A Memoir in Two Parts, which looks at her family's history in Europe before and during the Holocaust, and later in the United States. She is a professor at Lesley University and director of the school's interdisciplinary Ph.D. program in educational studies. She also has written Until We Are Strong Together. She lives in Boston.

Q: You write, “Shortly after the death of my father in 2001, I felt compelled to craft my family’s story into words on the page.” Why did you want to do this, and did the experience of writing this family memoir end up being what you expected?

A: The latter question first, it ended up being far more than I expected it to be…[While I was getting an MFA at Bennington] one of my teachers, Sven Birkerts, said, Knock off this academic stuff—you’ve got to write your family history! He had written about my uncle, and was intrigued by the triangle [among my father, mother, and uncle].

When my father died, I felt that sense that the memories were going with him, and the longer he was dead, the less I’ll remember him. It felt important to start it right away.

Q: The book is divided into two parts. Why did you divide it, and was one part easier to write than the other?

A: The decision was very much the suggestion of my editor at Random House, Sam Nicholson. I felt he was absolutely right—it needed separation between the aspects of life that I didn’t witness and have to imagine, though I did a lot of research—to separate that from those parts of the Heller life that I was part of…

A: The publisher, Susan Kamil, the uber-editor who bought the book, she wanted Reading Claudius as a placesetter because I had suggested that title. She felt people would think it was the emperor. When it was about to go to the printer, Susan said, It’s always been Reading Claudius, and I want it to be Reading Claudius. That was wonderful because I did too!

Those two words came from that it was [realizing] my father’s death and the encouragement at Bennington made me what to do this—but the deeper genesis was where my uncle was reading from my mother’s book of [Matthias] Claudius poems when she was close to dying.

I was anticipating losing my mother, and I [saw] the connection between my uncle and my mother that I’d never seen before. That intimacy through poetry—a window on the past. I was thinking, Oh, my God, there was a whole life I wasn’t part of that was so intimate and real. 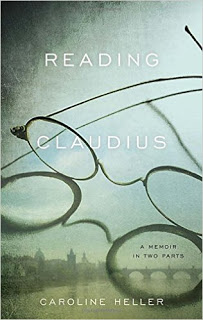 Q: How much did your parents discuss their experiences before coming to the U.S.?

A: Very little. It was nothing of my father being in a concentration camp, except to describe him as a prisoner…it tended in the 1950s and early ‘60s to be very much clouded over in American culture. I knew pretty much nothing of that.

I was read Claudius poems and German nursery rhymes. My father romanticized [his home town of] Komotau. I thought of it as a fairy-tale town. My mother talked about Frankfurt…But I was told almost nothing about anything else. I knew there was a war, and that they weren’t born in the United States.

Q: Did you know they were Jewish?

A: I did and I didn’t. I tried in that scene [in the book] when I was already 16 years old, and was no longer shy. I felt the passion of defending the meaning of being Jewish. But I didn’t know the answer, or that I was permitted to speculate on the answer.

On the one hand, that filled me with dread. On the other hand, when I realized I didn’t know how to answer the question was a profound moment for me. I don’t quite remember how it unfolded [afterwards].

Q: How did you learn about the relationship between your uncle and your mother?

A: It was something I was told. I always felt this combustion between the three major adults in my life, a sense of darkness and secrecy, a passion often around ideas. My mother was very shy as well, so I was taken with all that came out of her during those moments.

When I was a teenager—my parents were always very worried about me—I went every week to a child psychologist in Chicago. On the train or in the car, there were intimate moments between my mother and me. I don’t remember going alone on the train…

On the way back, I would talk about what we talked about [in the session] and my mother would tell me things—I was involved with your uncle before your father…she minimized it until much later. I didn’t know until much later the extent of that triangle.

Q: How did you differentiate your roles as writer and daughter as you wrote the book?

A: It was a tremendous battle the whole time—I doubt I ever fully won it…I knew I had to sympathize with each character even though I had a hell of a time with my uncle.

I knew I had to find all that was wonderful about him. I found it in his books and in the gay connection. But I didn’t want to write a book about, Erich Heller and Caroline Heller are gay! I knew I had to find a way to love them all. I could be a daughter and a niece in finding that love, but the writer in me knew I had to do that.

Q: What was the role of Edward R. Murrow in helping your father leave Europe?

A: I think about that a lot because of what’s going on now in terms of refugees. The whole story would have been 100 percent different had Edward R. Murrow not made that connection with my father. It was quite serendipitous.

In April 1945 the camps were quasi-liberated but there was still a lot of death. My father [who had gone to medical school] summoned the doctor in him and [separated] the prisoners with TB…

When Edward R. Murrow came in with the soldiers, he went to that building. My father was one of the strongest physically in that building, and he became one of Murrow’s guides. Murrow said, What can I do for you? [My father] said, Please, get my name on air. No one knows I survived.

In one of my research trips I met with [my parents’ friend] Eve Adler Road. She was with Erich and Eve’s husband [in England] the night of that broadcast. They heard it as live as it could have been at that time.

There was a postscript to the evening news—no one ever knew what it would be. That evening, they said, Let’s keep the radio on. And it was the Buchenwald broadcast. I was so blessed that Eve lived so long [and could describe it to me]—Erich never talked about it in that detail.

It’s very much as it shows up in the letters my father wrote to my mother. Murrow stayed in touch, and [my father] got his personal assistance in getting a visa…if you’re just a number, one of thousands of refugees who needs help, it can happen or not, unless someone is your advocate. That was Murrow for my father.

When we lived in Washington, they were pretty closely in touch. I knew my father visited Edward R. Murrow when he was dying, and had a chance to tell him of his importance in his life. My father stayed in touch with Janet and Casey [Murrow’s wife and son].

Q: How have readers responded to Reading Claudius?

The response has moved me deeply and really contributed to a kind of re-integration of my life. People from way way back found the book and then found me.

One person in that category is my mom’s best friend, who kind of left my life when my mother died. She wrote me an amazing email and we have seen each other since then. My “boss” from my very first post-high school job contacted me and we have become pen pals, catching up (or trying to) on many many years.

And the questions and comments people have offered at readings around the country have inspired really fine conversations. People seem to see Reading Claudius as having a universal message as well as a very particular one from a particular place and time.

Q: Your parents were immigrants to the U.S.--given that immigration has become such a major topic in this election year, do you think your family's story speaks to some of the issues under discussion today?

A: Mightily. Horrifyingly. And this takes me back to the [previous] question. One of the people who contacted me after she read Reading Claudius is Mary McClellan. Mary lives in Oregon and is the daughter of the American military chaplain who met and cared for my father and other just released concentration camp survivors in 1945.

Her father was so undone by meeting these survivors that he wrote an op-ed piece to life magazine about the degree to which the U.S. MUST accept more survivors and refugees. Life rejected the op-ed piece and the chaplain’s general feeling was that the U.S. wanted to appear to the world to have a benevolent embrace when in fact it didn’t at all.

While I am an enormous fan of President Obama and I know that he and many in Congress feel deeply the plight of Syrian refugees (as one instance), so much more could be done to give them safe haven here. Angela Merkel has been so prescient in that regard.

A: I want to, but not yet…I’m trying to remember the ideas I had before Reading Claudius. I’m on sabbatical so I’m allowing myself space to not be yet fully involved in anything else. I have to do a few things for my university. I don’t know what my next creative project will be…