Rachel Hall is the author of the new story collection Heirlooms. Her work has appeared in a variety of publications, including Bellingham Review and Crab Orchard Review. She is a professor of English at the State University of New York-Geneseo.

Q: The stories in Heirlooms were inspired by your own family’s experiences. What did you see as the right combination of fact and fiction as you wrote the book?

A: Heirlooms is inspired by family stories, but I start fictionalizing as soon as I hear a story—and then I believe my story is what really happened.

For instance, in Heirlooms, I made Lise and Alain twins, because in real life the characters they were based on were incredibly close. It seemed easier to explain their closeness if they were twins.

At one point, I was talking to my brother about our grandmother, on whom Lise is based, and I mentioned her twin brother. My brother said, more or less, what are you talking about?

I’m not sure I thought in terms of fact and fiction as I wrote. I think the fiction-writer is always embellishing and imagining, trying to understand motivation in a way that other people (normal people?) aren’t.

For instance, the story “La Poussette,” is based on a story my grandmother, Alice, told me about a neighbor of theirs who refused to sell them any food. This was during the war in France. She claimed she didn’t have any to spare, though it was clear she had plenty.

At the time, my grandparents were trying to farm in the Vaucluse, but they didn’t know anything about farming, so they were pretty hungry. The neighbor woman tried to brush them off, but when she saw my mother’s pram, she suddenly remembered some barley she could part with, in exchange for the stroller.

In my story, I create a character, Sylvie Beauchard, who refuses to sell or barter with the Latours, and then I tried to understand her motivation, her selfishness and cruelty. I guess you could say that I often take a real event and fictionalize around it.

It seems like a small thing, but I chose fictional names for the characters even when they were based on real people. This gave me freedom to veer away from what actually happened to make a more compelling story. And my allegiance was with story always, over fact.

I should also add, that I felt some discomfort when I made my characters (those based on real people) act in certain ways or endure actions. The rape in “Leaving the Occupied Zone,” for instance was very hard to write. It was necessary to the story, but I felt sort of ruthless writing it. 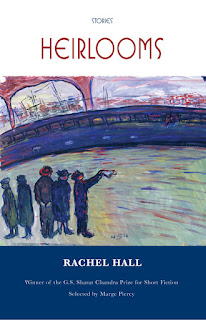 Q: Before you started the first story, did you already know you’d be writing a book, and did you write the stories in the order in which they appear in the book?

A: When I wrote “Saint-Malo, 1939” I thought I was simply writing a single short short story. I tried to make it as tight as possible with the intention of entering it in Glimmer Train’s Very Short Story Contest. (It won third place!) The story was later published in Gettysburg Review and it got a lot of positive attention, which was great.

I thought I was done with the material, however. I was working on something entirely different when I got the idea for “In the Cemeteries of Saint-Malo.”

I was on sabbatical then from teaching, so I took a couple of days off from my other project to write the story. When it was done, I realized I had the beginning and ending of a linked collection.

Months later, I wrote the title story in another happy burst while my husband and daughter were out of town. At one point, I wrote down a number of story ideas on index cards and then I worked on whichever caught my interest.

In other words, I didn’t work in any organized fashion. This way of working kept the process fun and interesting for me. I loved being able to move around in time and character and point of view.

Q: Why did you pick Heirlooms as the book’s title—it’s also the title of one of the stories—and what does it signify for you?

A: Titles are tough. Sometimes a title will leap out at me while I’m writing, and I know it’s right. Other times, it’s a struggle. I find it’s much easier to title other people’s work. In a writing group I was in for a while, I was known as “The Titler,” because I was always coming up with titles for other people’s stories.

With the short story, “Heirlooms,” the title was one that came to me easily because it’s a story about the absence of tangible heirlooms. Around the time I was writing this story, I visited a new friend’s house. She had lovely antiques from her grandparents on both sides of her family.

I was struck by her casual acceptance of these things. She appreciated her heirlooms, but she also took for granted that these things had been passed down to her.

It made me think of the things my family had abandoned or left behind when they moved during the war, and then again after the war when they came to the States.

Of course, things are minor compared with the other losses of war and immigration, but I’ve also come to understand how a thing—a dining room set, a string of pearls, candlesticks—brings to mind the people who used it, makes them vivid and more knowable.

In this way, heirlooms function as memorials and markers, which is an issue that comes up for characters in other stories as well.

Q: Did you know many of these family stories as you were growing up, or did you learn more about your family history as an adult?

A: I grew up hearing stories from my mother about her life before, during, and after the war. When I was younger these stories were about the strict teachers she had at lycee or about the girls who picked on her because she was often the youngest in her class.

I was the kind of kid who pored over the family photograph albums, and I’d ask questions as I looked. My grandparents told me stories too, though they didn’t live nearby until I was in my 20s. But whenever we visited them, my brother and I would ask questions.

My grandparents could be persuaded to retell stories, and this way I’d sometimes get a new detail or bit of information. Sometimes this detail would change the whole story for me. This made me wonder about what wasn’t being recounted—either because it was forgotten or in order to protect me from some troubling incident.

As I got older I became aware of the way that the storyteller shapes the story. For instance, Alice often told the story of going to get my mother as her biological mother was dying.

My mother’s biological father, who was a medic, was away at the time, stationed at the Maginot Line. Alice couldn’t have children of her own, and my mother needed a mother.

I loved listening to Alice tell this story. She would laugh with pleasure when she talked about the way my mother, who wasn’t yet 2 years old, reached up to her from her crib and called her Maman. “She adopted me,” Alice would say.

As a girl, I loved the symmetry of this story, the perfect logic of it, but when I had a daughter of my own, I came to understand how layered and complicated this situation was.

A: I’ve got two projects in the works. One is a collection of short stories and the other is a novel, of which I have a few chapters completed.

Like Heirlooms, both draw on real events—some historical and some more recent—though I don’t have a personal connection to these events, other than the fact that I find them intriguing.

Both projects have involved research, too, which I love, especially archival research. I’m a fan of libraries like most writers, but the archives are especially wonderful. I love receiving the boxes full of materials—all that information!

I even like the requirement that one write with pencil when using archival materials and the funny gloves you have to wear to prevent damaging the papers.

A: I’ve got a number of events scheduled for the fall. I’m thrilled to be reading from Heirlooms in Columbia, Missouri, on Sept. 21. I will also be in Kansas City, Missouri, where my publisher is, speaking at the National Archive on Sept. 22.

Back in Rochester, I’ll be reading with three of my students from SUNY Geneseo at the Rochester Fringe Festival. My students will read poetry and fiction inspired by their families’ stories—and I’m especially looking forward to that.

My launch party will be Sept. 27 at Swiftwater Brewery. There will be an Heirlooms special edition beer!

In October, I’ve got two NYC events—10/18 at the Cornelia Street Café with Diane Simmons (the author of The Courtship of Eva Eldridge) and 10/20 at Pete’s Candy Store.

Details about these events and more are available on my website. I’m also on Twitter @rach_h_writer and my email is hall@geneseo.edu. I love to hear from readers!