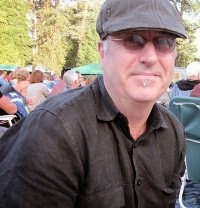 Chris F. Westbury is the author of the new novel The Bride Stripped Bare By Her Bachelors, Even. He is a cognitive neuropsychologist at the University of Alberta, and he is based in Edmonton, Alberta.

Q: Why did you decide to include a work of art by Marcel Duchamp as a major focus in your novel--as well as the inspiration for its title?

A: I focused on Marcel Duchamp for a few reasons.

One of them was that I already knew a lot about him, as I had been fascinated by him for many years, mainly thanks to my brother, who is an artist much influenced by Duchamp. I knew Duchamp’s ideas were complex and fun to think about, and I liked the idea of using my novel as a reason for thinking about them in new ways.

The second reason is that I saw parallels between Duchamp’s attitude towards art and psychotherapy. My original idea for the book had been to write about “a cure by art,” which was really a cover for writing about the more general idea that the way we contextualize our experiences of the world is what gives meaning to the world. 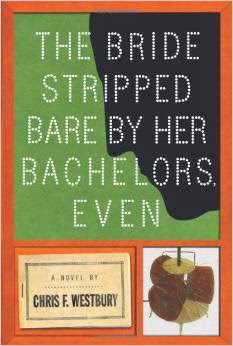 Duchamp is perfect for this because one of his main contributions to art was to turn the world away from the artistic work that he came to deride as “retinal art”--art which was merely for looking at--to an art of ideas.

His idea of the ReadyMade was to take ordinary industrial objects and declare them to be art. (With typical Duchampian self-contradiction, when he decided to make multiples of his ReadyMades later in life, he had them constructed by skilled artisans, thereby assuring that most of his existent ReadyMades were not in fact ReadyMades but carefully constructed works of art.)

When you reach the point at which you can see a snow shovel or a bottle rack or a typewriter cover as art, you are doing something quite extraordinary, which is taking responsibility for your own artistic vision.

Duchamp turned the spectator into an artist. This conversion of the self from spectator to participant is very similar to what happens when a person overcomes a clinically-defining psychological limitation by coming to see the world in a new way.

One minute a person is constrained by the meanings of the world. The next minute they can see things in a new way that allows them to cast off certain limitations that had tied them down.

Part of the trick in psychotherapy is to get people to see that there is more than one way to view our place in the world. We are so stuck in our own viewpoint, so convinced that our own way of seeing things is The One True Way that it can require a considerable effort to break out of that and realize it is just not true. 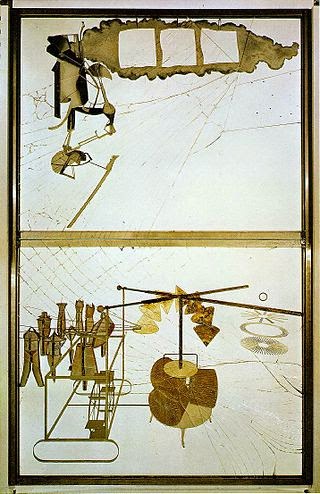 A third reason I chose Duchamp is because of his most famous piece, “The Bride Stripped Bare By Her Bachelors, Even,” which is a meditation on the strange complexity of human sexuality.

My novel centers around that theme, and visiting the piece where it is installed at the Philadelphia Museum of Art also serves as in some ways the real end-goal of the road trip that my characters take. These are the two reasons that I named the novel after the piece.

A: I think “complement” is the exactly right word, because in a certain sense the two disciplines have absolutely nothing to do with each other. Each fills a space left by the other.

Modern science is of necessity and by design extremely tedious, and focused in a very linear way on minutiae. It runs along certain tracks and can usually veer from them only by very small degrees.

This conceptual conservatism is what makes science powerful and great, but it also means that one can work very hard for a very long time and make only minuscule progress.

It is such a relief and so much fun to be able to play around with bigger ideas writing fiction, where ideas can combine and contextualize each other in complex, dynamic, and surprising ways. Writing fiction is an antidote to scientific work, which by itself drives all scientists mad in ways they do not always recognize themselves.

Q: How did you come up with your narrator, Isaac, and why did you decide to include the Abraham and Isaac story as a key theme in the book?

A: One of the weird things about writing a novel (for me, at least) is that the process is so extended in time, so organic, and so multi-dimensional that questions like this become almost impossible to answer.

There are so many changes that accrue between the time when you first sit down to write and the time the book gets printed. It becomes impossible to say when certain elements become “fixed.”

Elements come in and are edited out, or aren’t edited out but grow because they play off other elements. There is not always a simple reason why, or even a simple answer to when exactly it happened.

So I actually don’t have a precise answer to either of these questions.

If you love them, you feel the pain of your love because you know that all of them will eventually have to face what Isaac faces: the intrusion of chaos into the order they have tried so carefully to preserve. Usually they come out of it better when chaos intrudes, as Isaac does, because it enlarges their world.

I actually think (but I may be just making this up) that I started to think about incorporating the story of Abraham and Isaac because I was listening to Leonard Cohen’s song “Story of Isaac” one day while I was writing, after I had already committed myself to the obsessive compulsive theme.

Near the end of the song, the singer scolds Abraham by saying that “A scheme is not a vision, and you never have been tempted by a demon or a god.”

That line seemed apt to the psychiatric patient’s situation. Psychiatric symptoms often reflect the fact that a scheme about how the world is organized has somehow come to have the force of a vision.

Some obsessive compulsives count their steps and feel compelled to enter their house on, say, a number of steps that is a multiple of seven. This is not a rational idea, but that is not obvious to those who feel the compulsion.

I began to consider the idea that religious belief was also something like a compulsion: a deep-seated need to work within a constrained framework that is self-justifying.

My character Kelly plays with this idea a little. Although she is deeply religious, she has long gotten over the silly idea of God that so many people seem to have: that if He existed, He would have the personality depth of a lightly-sketched grumpy cartoon character.

When I started to look into the idea of using the Abraham stories, I was struck by the ubiquity of the Abrahamic tradition, which informs the three major Western religions, Christianity, Islam, and Judaism.

I love it when something tiny resonates so widely. I loved it all the more when I discovered that the three traditions did not agree on the details of the stories, and that each one tweaked them slightly to fit their own purposes.

Being an organized guy, you even have a definite plan. The schedule you have made up for yourself says that you will go up the tower on your third day in Paris, just before you go to the Musée d’Orsay to see Manet’s famous painting of a nude women having a picnic with two formally dressed men, Le Déjeuner sur l'herbe.

But on your second evening in Paris, you find yourself in a little jazz bar that happens to be near your hotel, where you meet a wonderful woman with dark shiny eyes wearing too much bright red lipstick, who announces, after a couple of drinks and an intense and wonderful conversation, that you and she should take a train to Berlin together tomorrow to see an exhibition on the Romanian sculptor Constantin Brancusi that just opened there.

Because she is beautiful and you want an adventure and you are young and you love Brancusi too--and because that excess of bright red lipstick somehow just works on her, even though you had always thought you hated that look--you do go.

So you end up spending time in Berlin rather than Paris, drinking German cocktails in dark German jazz cellars, and making love to a beautiful French woman in the reddish glow of a bedside lamp with a light silk scarf thrown over it, in a cheap hotel room that the two of you have decorated together by propping up postcards of works by Brancusi on every available horizontal surface. It is the best vacation of your life.

When you get home and your friend asks you how the Eiffel Tower was, at first you can hardly even understand what he is asking about. Your trip had nothing to do with the Eiffel Tower. It was about red lipstick and a beautiful bright-eyed French woman and Brancusi sculpture and Berlin jazz cellars.

Writing a novel is just like taking that trip to Paris.

A: My next novel (should anyone agree to publish it) is something of a modern re-working of the Book of Job, a story about a very religious hardworking surgeon who has terrible things happen to him, loses his mind, makes some horrible mistakes, finds comfort in his pastor’s enigmatic sermons, and is forced to re-think his relationship to God, his family, his career, and his own life. I titled it Small Scars.

I am currently writing a novel about a politically-obsessed left-wing Canadian second-hand bookseller who needs to fix his dishwasher. Trust me; you’ll love it.