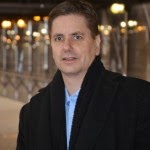 Dan Morse is the author of The Yoga Store Murder: The Shocking True Account of the Lululemon Athletica Killing, which looks at a murder at a yoga store in Bethesda, Maryland, in 2011, and its aftermath. Morse is a reporter for The Washington Post, and he lives in Washington, D.C.

Q: You covered the Lululemon murder from the beginning. Why did you decide to write a book about it, and how much additional information did you need to research for the book that hadn’t been in your stories?

A: I’ve been a newspaper reporter for a long time, and I always wanted to write a book. This case had a lot of different elements. Someone was struck and stabbed 331 times in a yoga store—that was dichotomy enough.

I got that early in the case when I was covering it. My concern for writing a book would be were there enough interesting characters to keep people reading.

I wrote a profile about [detective Jim Drewry] for the newspaper…and I knew he would be good. Then with the trial the stuff about the Apple employees [hearing noises in the Lululemon store next door but not calling the police] came out and I thought that was a whole new dimension.

I didn’t fully understand what happened with Apple until I watched the trial…I thought it would be interesting to detail what they did and didn’t do in the store….obviously they messed up but I always thought, we all mess up, and they messed up in such a tragic way…

Q: What surprised you most as you covered the story and wrote the book? 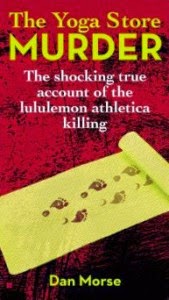 A: I think [murderer] Brittany Norwood--I had access to [her] text messages, which I thought were great, it’s kind of weird looking at them, it’s really voyeuristic, you’re looking right into someone’s life.

They really unveiled this dark secret side of her that was surprising to me, and likewise on the opposite end of the spectrum, reading her texts communicating back and forth with her older sister in particular, with her parents, with some of her friends—I read all these, and it was impossible not to think, This is real; she could actually be a decent person.

I really struggled to try to understand that because what she did was so evil. It’s almost easier to think she’s through and through evil and anything nice about her was an act.

But you don’t act in a daily text message, you just don’t keep up that act, so I thought some of that was real. Which means as I tried to figure out her, is she a psychopath…I had to think through how does that work. You hear about psychopaths, you hear this evil side, no conscience, that’s the way they’re totally wired, anything nice is an act.

That surprised me, as I was reading books about psychopaths and talking to experts. Is the appealing part an act or can it be real? They said, yeah, it can be real.

Q: Do you think Brittany Norwood’s motivation will ever be known?

A: It might be helpful for someone like me, who’s writing about this—I think certainly when she went off to prison, she didn’t fully understand; maybe in time she will understand.

Even if you understand what happened between her and [victim] Jayna [Murray], it only gets you to a shoplifting deal [about suspicions that Brittany Norwood had shoplifted], and you still can’t understand why she did it [the murder]….There’s two minutes no one knows. Even if you had a recording of what was said, for her to kill Jayna because of that makes zero sense.

It has to be something in the way her brain was wired. She would have to understand that herself and more importantly and more unlikely for now, she’d have to be willing to share that.

Q: Do you think she ever will?

A: She’s got a real good reason not to, which is if she wants to get out of prison--she’s got an appeal pending, it’s going to go into early next year. It’s probably not going to happen.

Maybe she might hope for some change in sentencing; she’s serving a sentence of life without parole. She could hold out hope that those kinds of sentences might be changed in the future, although even that’s unlikely.

When I first started working on the book I put a lot of pressure on myself to try to talk to her. … Some journalist friends told me and I became convinced that those text messages were better. She was obviously a big liar. What she would have told me would be self-serving. The text messages were real time stuff in her life.

Everything was just so brutally hard for Jayna’s family but the defense made it even harder. A full-blown insanity defense might have been easier to take, but theirs was kind of this, well, there was kind of a fight, and by implication Jayna was kind of part of this and at the same time Brittany never admitted really doing anything.

For the Murrays, they’re trying to get through every day and every hour, and if they could have heard someone take responsibility, that would have helped.

The defense couldn’t even come out and say Jayna Murray started the fight, because there was no evidence, there was nothing even remotely like that, so they had to imply it.

To spend time with the Murrays, to try to understand the amount of grief they’re in--they’re an interesting family to try to show people what can happen. They’re pretty strong people, they’re smart, and to see them go through this…lets you know what everyone would go through.

Q: What was there about this particular case that captured people’s attention so much?

A: First was that it was mayhem in Bethesda. Bethesda is a great combo of being close to Washington, so you don’t have these horrendous commutes, you’re near the city but it’s real safe.

For a week it was like a nightmare—random guys in ski masks who could slaughter and rape people they don’t know. That’s like out of the movies. It really doesn’t happen that much anywhere, and here it happened in a place where people thought they would be safe.

It captivated their fears. People were paying attention to this in a real way. Are these guys going to be caught? Are they going to do something else?

And as people were paying attention to this, it takes this 180 degree turn, and suddenly the rape victim is the killer...this young woman who worked at a yoga store stabbed her coworker hundreds of times and then lied about it and stayed at the crime scene. It was a fascinating development of a case that people were already watching. Then the details during the trial about the Apple employees not calling really amped up people’s attention to the trial.

A: Probably not for at least another year or so. My wife and I just had our second child, and I’m back at the Post fulltime. I certainly would like to write another one; I learned a whole lot. This is my first book. I think I know what kind of case would make a good book….It would definitely be nonfiction again.

A: Since I never wrote a book, I approached this as a really long newspaper story, which was kind of a fatal approach. I guess I knew this but I didn’t understand it, that this was a really interesting case, but no matter how interesting it was, I had to get to know the characters to make people keep people reading the book.

I showed some really early opening draft chapters to journalist friends, and I got pretty harsh criticism at first. I had to understand what the detectives understood instead of trying to understand the case.

I was trying to understand everything, and I’d come to places where I’d be saying, I don’t really get this…. As long as I could put those same questions in the detectives’ heads I was fine, and it took me a while to realize that….

My book editor said, Just write it like a novel. [But] it’s hard. You can’t say, According to this, or so and so said this, you have to write it as if you’re a fly on the wall. If you’re not attributing those sentences, that means you’ve got to know the sentences are true.