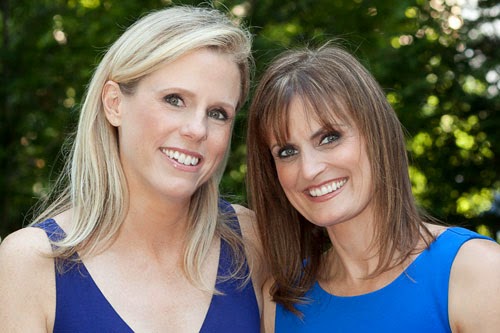 Phoebe Thompson and Crystal Walker are the authors of the new book Desperate in DC: Money, Motherhood and Manners in the Nation's Capital. They also write the Desperate in DC blog, which features the same characters and issues as the book. Their real names are Penelope Bell and Cherie Morris, and the answers below are from Penelope Bell on behalf of both authors. They live in the Washington, D.C., area.

Our husbands thought these e-mails were funny, and they suggested we start a blog using fictional names and characters. From there, Cherie and I started discussing turning the blog into a book, and we worked on the plot, and the writing, of Desperate in DC together over several years - mostly over tea and cocktails!

Q: What is the relationship between the blog and the book at this point?

A: While we still like the freshness and immediacy of the blog postings, which are a great way to comment on issues of the day, both Cherie and I love to curl up with a novel at the end of the day, and we suspected a lot of our potential readers felt the same way, which is why we developed the plot for Desperate in DC, the novel.

In the book, we explore some of the same subjects and themes in our blog, but we also have characters and a narrative story arc, which we hope will keep people reading.

Q: How do the two of you collaborate on your work?

A: As we alluded to above, Cherie and I mostly wrote separately, because otherwise we would distract each other too much with the gossip of the day, but we did work out the plot together over many, many an afternoon teatime, or occasional (ahem) evening cocktail, and gradually, the book took shape.

It was great to have a co-writer to bounce ideas off, and discuss niggling plot issues with, but at the end of the day, you both need to be very flexible about how the book actually gets written, and not precious in any way about having your own deathless prose edited by the other person.

Q: How did you come up with the book's format, which includes a lot of photos, a newsletter, and various other features?

A: Cherie and I have both always enjoyed epistolary novels, and love the way they keep the reader reading between the lines of the correspondence to guess what really happened (rather than trusting the letter-writer's word for it).

A novel we both particularly enjoyed in this format was Lady Susan, by Jane Austen, and while we certainly wouldn't claim Desperate in DC is in the same league, we like to think our book captures some of the same unreliable correspondent's approach, in the sense that our characters will often assert something, when the reader guesses the actual truth to be quite different! In that way, we are able to poke fun at multiple characters in the book, including our alter egos, which was a lot of fun.

The other forms of correspondence, including Facebook postings, fake newsletters and mocked-up post-it notes were suggested to us by a great potential agent we found in New York, who read the entire first draft, which was all in the form of e-mail exchange.

She really liked the book's subject matter and humor, but suggested we include other forms of communication to break up the format. We incorporated her suggestions into our second draft, and while the agent in question was ultimately too busy to take us on, we think the book is better for her input.

A: Cherie and I would definitely like to write a follow-up to Desperate in DC, based on our experiences parenting teens, helping them apply to college, and dealing with the fallout from long marriages, menopause and aging parents, but the next book might have to wait until the fall for us to start writing, while we work on promoting this one (and dealing with all of the aforementioned!).

A: Yes. Cherie and I are both secretly men. Just kidding.