Wanda Wyporska is the author of Witchcraft in Early Modern Poland, 1500-1800. She has held scholarships at Hertford College, Oxford; the Institute for Historical Research; and the University of Warsaw, Poland. She is based in London.

Q: How did you first get interested in writing about witchcraft in Poland?

A: My grandfather was Polish and I was studying Polish language, literature and history at the School of Slavonic and East European Studies, University of London.

I went to Krakow for my year out and stayed for an extra year, because I became interested in witchcraft, after taking a history course on stereotypes. Among the stereotypes we studied were witches and I realised that here was a fascinating subject with little written about it in Polish and nothing in English.

As I continued to study witchcraft, I realised it was similar to my work as a journalist - uncovering people’s stories and the circumstances surrounding them.

I was lucky, because even as a post-grad, I was invited to conferences to speak, because so little was known about witchcraft in Poland.

Q: What are some of the biggest misperceptions about witchcraft?

A: Well, where do I begin? I always start my talks with disclaimers and myth busting, in an attempt to refute the persistent myths out there.

Myth number one for me is that witches were women. Around 25 percent of those executed for witchcraft were male - rising to 80 percent or more in areas in Russia, Estonia and Finland.

In addition, witches were not predominantly midwives or healers. Certainly, as someone who’s been through childbirth, I would rather the village didn’t persecute the only person with some knowledge in this area and the evidence shows that although there may be clusters of cases where lying-in maids and midwives may have been accused (Lyndal Roper’s work, for example), it’s not a plausible theory to be applied to the persecution as a whole.

In fact be very wary of any author who claims to have an overarching theory to explain why the witchcraft persecution happened. 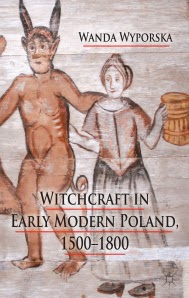 Trials for witchcraft were predominantly about individual conflict, but as always there were exceptions to the rules. Some trials were more political in their nature and there were clearly spats between families, lords and servants and individuals of the same social status.

Q: How did attitudes toward witches in Poland during the early modern period compare with attitudes in other countries?

A: One of the unusual aspects of my work is that I compared the details in the trial records with representations of the witch, the Devil and sabots in lots of different forms of Polish literature of the time. I looked at drama, ecclesiastical works - both Protestant and Roman Catholic and also at calendars, herbals and comedies.

What was unusual about Poland is that there was one of the first translations of the infamous Malleus Maleficarum (A Hammer of Witches (1486)) in 1614 and there was a particular style of middle class literary comedic output as well.

What emerges from a study of both literature and trials is that representations of the witch ranged from images of women who could produce abundant supplies of cheese and milk, and who were to be envied; to the old, warty crones that have survived to this day in popular imagination.

Across Europe and North America, during the early modern period, life was governed by religious belief and we cannot do the period justice unless we realise that there was genuine belief in the use of supernatural power and in the Devil and witches. Religion was all-pervasive, society was steeped in religious belief in a way that is very hard for some to conceive of in the twenty-first century.

We cannot dismiss early modern society as backward and people as stupid. As I often say when giving talks, I don’t understand physics, so I do not know how a telephone works, I could call it magic, I could call it physics - to me, it’s all the same. It’s just an alternative belief system with a different vocabulary. That’s a simplistic analogy, but it usually serves well to make people think again.

It’s important to say that we need to differentiate between those who were accused of witchcraft and those who believed they were witches or had some access to supernatural power, either for good or evil purposes.

Literature reflects those differences and many sceptics had a hard time justifying their belief in the religious concept of witches and yet at the same time they decried the persecution of so-called “witches.”

Q: What did the witch trials in Poland say about the role of women during that period?

A: One of the reasons that I analysed trials of men accused of witchcraft is that I wanted to see the role that gender played and to test it in a different way.

This was reinforced by the patriarchy of the Christian churches and the state. As the Polish proverb said “Ja Pan, Ja Prawo” (The Lord is the Law) and given the fragmented nature of the estates and nobility, often there was a lord in sole charge of the village and what he said went.

This is the key factor in the trials that I studied in Wielkopolska (the region around Poznan), where justice moved swiftly from charge to trial to sentence to execution. There was little room for appeal in trials when the accused rarely had the benefit of a formal defence and sometimes didn’t even know what charges had been brought against them.

My research reveals that many of the accused were female servants, who were already in a vulnerable position, subordinate to others in someone else’s household. They could easily be caught up in conflicts of a sexual nature or be the subject of envy or dislike.

A: I’m currently working on the Tainted series - a trilogy of time slip novels based on the witchcraft trials and it’s wonderful to write without footnotes! I’ve been reading historical fiction ever since I can remember and I’ve always wanted to write a novel.

Witchcraft is such a dramatic subject, it’s filled with conflict, sex, religion, denunciation and more. That’s why I certainly had enough plots for three books. I also wanted to show the hereditary nature of witchcraft accusations since once someone was accused, the family was tainted for generations.

A: Witchcraft in Poland was launched at the Atlantis Bookshop, which was the haunt of Aleister Crowley and his followers. It was very atmospheric and proved to be a great choice of venue. And I’m delighted to say that my publisher Palgrave has nominated my book for the prestigious Katherine Briggs folklore prize, so fingers crossed.