Ellen Cassedy is the author most recently of We Are Here: Memories of the Lithuanian Holocaust. She is a contributor to VilNews and SheWrites, among other outlets, and she lives in the Washington, D.C., area.

Q: Why did you decide to write your book, and what surprised you the most as you researched it?

A: When my mother was alive, I could count on her to keep track of all those who had come before.  But after she died, I felt my family past threatening to slip out of reach.

I wanted to breathe that air, to look up into that vast Baltic sky, to imagine myself back into the daily lives of my ancestors – and to improve my Yiddish by enrolling in a unique and wonderful summer program in Vilnius, the capital of Lithuania.

But on the brink of my trip, things started to happen. My uncle revealed a secret from his Holocaust past. An old gentile man in my ancestral town asked to “speak to a Jew” before he died.

A story began to unfold – a story with many facets, from the unspooling of a family story, to the joys of exploring an age-old language, to a search into some of the complexities of the Holocaust, to the discovery of soulmates in Lithuania today.

Even so, I’m not sure the book would have come to pass if the late Ruth Gay (the author of one of my favorite Jewish memoirs, Unfinished People)  hadn’t said the magic words: “You must write this down.”

Q: How difficult was it to write about such a tragic period in history, one that had affected your own family?

A: I often felt overwhelmed by the complexities of facing the past in the land of my ancestors. After fifty years under two regimes, Lithuania sometimes seemed to me like a cauldron bubbling with competing martyrdoms, resentments, and hatreds. 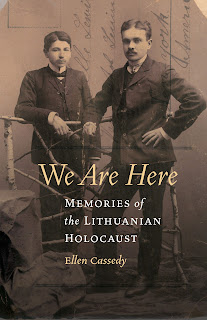 What helped me was meeting the brave souls, Jews and non-Jews, who are working in an often hostile environment to engage deeply with their country’s Jewish heritage, even when it’s painful.  These individuals surprised me, they educated me, and they inspired me.

Q: What did you learn about your uncle's experiences, and how did that affect the way you thought about the Holocaust?

A: My uncle revealed to me that while he was confined in the ghetto, he’d been a member of the controversial Jewish ghetto police.  With that, the black and white picture of the Holocaust I’d grown up with began to break apart.

As my uncle’s experiences became vivid to me, I found myself reaching beyond the columns labeled “good” and “bad.” I began to ask:  What do we expect of ordinary people in extraordinary times?  What should we expect?

Q: What is the situation today for Jews in Lithuania?

A: There are only 4,000 Jews in Lithuania today – reduced from a prewar peak of 240,000.  This “remnant community” is active in many cultural, educational, political, and commemorative initiatives.  Yes, anti-Semitism is alive and well in Lithuania.  At the same time, both Jews and non-Jews are involved in efforts to honor the nearly vanished Jewish culture.

A: We Are Here is keeping me very busy!  The Lithuanian edition has just been published.  I’m just back from the Vilnius Book Fair and a book tour to six Lithuanian cities. I spoke at the London Jewish Book Week.  And my book talk has been hosted by congregations, universities, and community groups all over the U.S.

A: Just how honored I feel that my book gives me the opportunity to explore important moral questions with audiences large and small.  Questions like these:
Can a country scarred by genocide take an honest look at its past and build a more tolerant future?
Can we help in that process?
Can we honor our diverse histories without perpetuating the fears and hatreds of the past?

--Interview with Deborah Kalb. Ellen Cassedy will be participating in the Temple Sinai Women of Reform Judaism's Authors Roundtable on April 27, 2013. For more information on the event, please click here.
Posted by Deborah Kalb at 4:20 PM