Ruth Franklin, a book critic and contributing editor to The New Republic, is the author of A Thousand Darknesses: Lies and Truth in Holocaust Fiction. She lives in Brooklyn, N.Y.

Q: Why did you decide to write about Holocaust literature?

A: I’ve always had a special interest in Holocaust literature – my grandparents were survivors, and I grew up on the stuff, quite literally. When I started working on the books section of The New Republic, I couldn’t help noticing how many Holocaust-related books were among the review copies that poured into the office every day. At the same time, several prominent memoir writers, including James Frey, had been exposed as frauds. I got interested in the question of how the tension between memory and imagination plays out in the literature of the Holocaust, where so much is at stake.

Q: You write, "Every canonical work of Holocaust literature involves some graying of the line between fiction and reality." What are some examples of that blurred line?

A: When I started looking into this, I was drawn to the question of how we categorize Holocaust literature: why are certain books called autobiographical novels, for instance, while others are labeled memoirs? What difference is there, if any? And what I discovered is that for many of these works – if not all – there is no easy way to categorize them. Writers of Holocaust fiction, such as Imre Kertész, obviously borrow heavily from their life experience, even when they insist that their works are fictional. And memoirs such as Elie Wiesel’s Night and Primo Levi’s Survival in Auschwitz freely use techniques borrowed from fiction. That’s precisely why these books have endured for so long: because Wiesel and Levi are great writers who are using their art to shape indelible stories.

Q: You begin the book by mentioning Fragments, by Binjamin Wilkomirski, a Holocaust memoir that turned out to be a fraud. What is the importance of that incident to the rest of your book? 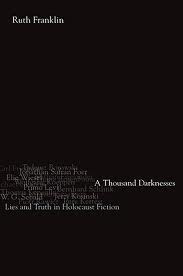 A: One of the main points of my book is that critics have tended to take a hands-off approach to Holocaust literature, often deeming it “beyond criticism.” Their intentions are good, but this kind of reverential attitude is actually dangerous, because it creates an atmosphere in which it’s frowned upon to ask any kind of critical questions about these books. And the result is that it’s all too easy for frauds like Wilkomirski’s book to slip through – and even to be validated by supposed experts. I argue that criticism – in the sense of appreciating these books as works of art, and examining how they came to be written and published – is essential to the way we understand Holocaust literature.

Q: How did you decide on A Thousand Darknesses as the title of your book?

A: The title comes from a line in a speech by Paul Celan, in which he talks about the need for language, after the Holocaust, to “pass through its own answerlessness, pass through frightful muting, pass through the thousand darknesses of death-bringing speech.” And we all know Adorno’s famous line that “to write a poem after Auschwitz is barbaric.” But to write a hundred poems, a thousand poems, a million might be better, because it would take an infinite number of works of literature to represent the vast multiplicity of voices and experiences that constitute the Holocaust. The thousand darknesses, then, are the endlessly echoing stories of the Holocaust.

Q: You are currently researching a biography of the writer Shirley Jackson. What can you tell us about that book?

A: I’m excited to have moved on to a very different subject! I’ve loved the works of Shirley Jackson since I was a child, especially her wonderful novel The Haunting of Hill House, which is a ghost story on the level of Henry James. And of course every high school student has read “The Lottery,” one of the most anthologized stories in American literature.

As a critic, I always want to know the stories behind the works I love – how they came to be written, what else was going on in the author’s world and the world at large, and so on. Judy Oppenheimer published a biography of Jackson in 1988, called Private Demons, but it doesn’t have much information about the books. Once I started poking around a bit and discovered that Jackson has a vast archive of letters, papers, and other personal documents at the Library of Congress – much of which was not available to Oppenheimer – I knew I had to do this book.

A: Please visit my website, ruthfranklin.net, for more information about my book and other writing.