Ken Budd is the author of The Voluntourist: A Six-Country Tale of Love, Loss, Fatherhood, Fate, and Singing Bon Jovi in Bethlehem, a memoir about his experiences volunteering in a variety of places, from New Orleans to Costa Rica to China.

Q: Among the experiences around the world that you write about in The Voluntourist, is there one in particular that meant the most to you?

A: In China I volunteered at a special needs school, working with a third-grade class. From time to time I would see a grandfather and his grandson. The boy was probably five years old and had this beautiful, happy smile. He also had cerebral palsy and couldn’t walk. The school was on the sixth floor of an old tea distributor’s building, and every day the grandfather would climb the steps, carrying the boy on his back.

The boy’s father, I learned later, had abandoned his family because his son wasn’t “normal,” so the grandfather cared for him, and he was always there: lifting him, whispering to him, holding the boy’s hands above his heads so he could “stand.” I never spoke to them—I don’t speak Chinese—but I’d watch them. I admired the grandfather’s devotion, and I envied their rapport. They were like a single unit. It’s one of the great things about these volunteer experiences: you encounter these ordinary yet extraordinary people that you would never meet otherwise.

Q: Fatherhood is an important theme in the book; you write, in the wake of your own father's death, of your concerns about not having children. How did the time you spent as a volunteer help you deal with those concerns?

A: At some point I thought… If I can’t have children of my own, maybe I can help someone else’s child, in some microscopic way. I came to appreciate the preciousness of life. I had an epiphany one night in Ecuador. I was volunteering with a scientific team that was studying climate change in the Andes Mountains. It was a two-hour hike to the site because there weren’t any roads.

We were based in a cloud forest, so most nights were grey, but one night the clouds parted and you could see the Milky Way and all these stars we never see and it hit me: we have all been given that rarest of opportunities, the chance to experience life. A British researcher told me that we only get 650,000 hours of life—if we’re lucky—and that number has stayed with me. We don’t get much time here. If life is a baseball game, I don’t want to spend three innings complaining about the Cracker Jacks. I want to experience the entire game.

Q: What surprised you the most in the course of your travels?

A: I think the biggest surprise was that the volunteer work was probably less important than the interactions that occurred. In China, the teachers work very difficult jobs, and my friend and I were like a break in their routine. We were a novelty and that helped to brighten their day. Everywhere I worked, I learned about the local people and they learned about me. 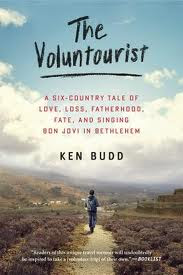 In Costa Rica, most people think Americans are lazy. Why? Because their impressions are formed by what they see on TV; by shows like Friends where everyone sits around drinking coffee. In the West Bank, the Palestinians have as many stereotypes about us as we have about them. It sounds very kumbaya, but working together and eating together and laughing together changes how we see each other.

Q: What would you recommend to someone interested in the sort of volunteering you did?

A: I started with a reference book called Volunteer Vacations that lists about 150 organizations. You can also search for volunteer opportunities on sites like GoOverseas.com and GoVoluntouring.com. You need to do a lot of research: I would usually ask to speak to a previous volunteer, and I’d ask questions like was the work helpful, were the living conditions OK, was the organization staffed by locals—are they creating partnerships or dependency?

If you’re working with kids, you may need to send references or submit to a background check—and if you aren’t asked to do that sort of thing, that should be a warning sign. Once you’re volunteering, just be humble, smile a lot, remember that you’re the guest, and do whatever you’re asked. I have lot of resources on my web site.

A: All of my earnings from the book are going back to the organizations and places where I volunteered, and that’s been the most gratifying part of this experience. We’re working with Global Volunteers, the organization I volunteered with in China, to create a fund for the special needs school where I worked.

We’re also creating a scholarship for Cross-Cultural Solutions, the volunteer organization for my Costa Rica trip. The scholarship is named after Franco Lalama: he was a Port Authority employee killed on 9/11 leading the evacuation of engineering offices in One World Trade Center. I became friends with Mr. Lalama’s stepdaughter—she was also a volunteer in Costa Rica—and we’re about halfway to our funding goal.

A: A radio host in New York told me that the book is like Mother Teresa meets Groucho Marx. I love that. I’ve always thought The Voluntourist is a serious book that doesn’t take itself too seriously. A fellow volunteer in Costa Rica told me you only learn about yourself when you’re outside your comfort zone, and I tried to embrace that throughout my journey.

I came to believe that feeling stupid is good, because every time I felt stupid, I learned something—about the local culture, about the work I was doing, about myself. Everywhere I went, I wondered how much good you could do as a short-term volunteer, but I truly believe that there’s power in small gestures and small acts of kindness. And small gestures become large gestures when we all do them together.

--Interview with Deborah Kalb. Ken Budd will be participating in the Bethesda Literary Festival April 19-21. For a complete schedule of events, please click here.