Catherine Chung's first novel is titled Forgotten Country. She lives in New York City.
Q: Why did you select Forgotten Country as the book's title?
A: It took me a long time to come to the title--I think it came to me in my last year of writing it, and when I thought of it, it just seemed right. The Korean War is sometimes called The Forgotten War, so there was that resonance, but also I was thinking a lot about loss and memory and history, and about nations and boundaries, but also the territories of childhood and family and grief. It felt like a title that could hold all those things!
Q: Your father had a sister who disappeared when he was a child. How did that piece of family history affect the writing of Forgotten Country?
A: It was definitely a seed--something I thought about and turned over in my mind. But it was such an unknowable thing! I think it was something I was always trying to approach with this book: something I was always trying to understand or get to know.
Q: One of the book's themes is the relationship between family members, whether it's sisters or parents and children. How did you come up with the characters of Janie, Hannah, and their parents, and why did you decide to write about a family with two daughters? 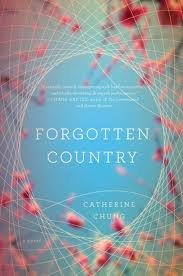 A: Gosh--you know, it feels less like I came up with the characters or this family, and more like I snuck up on them one day and started spending more and more time with them, until I realized what their story was, and was able to get it down.
Q: You were a math major in college. Did your study of math affect your writing at all, and if so, how?
A: I love math. I think studying it informed my sense of the world, in the way that spending any real amount of time with another way of thinking or another kind of language can do, if that makes sense. It certainly made me value a kind of precision or elegance in ideas or thoughts.
Q: Are you writing another book?
A: Yes, I'm working on a new novel, and I'm so excited about it!
--Interview with Deborah Kalb
Posted by Deborah Kalb at 7:02 AM