David Elfin has covered sports for several decades; he spent more than 20 years at The Washington Times, served as president of the Pro Football Writers of America, and sits on the Pro Football Hall of Fame selection committee. His seven books include The Ultimate Washington Baseball Trivia Book, Cole Classics! Maryland Basketball's Leading Men and Moments, The Ultimate Washington Redskins Trivia Book, and his most recent, Washington Redskins: The Complete Illustrated History. He lives in Bethesda, Maryland.

Q: How did your latest book come about, and given all the years that you’ve covered the team, was there anything that surprised you as you researched the book?

A: This book was different from my other books—the others were self-generated, either with co-authors or on my own. They were basically self-published; we were working with this organization since the 1990s and they have a deal with the printer. The first book published was with two other writers, and they also published my next five books.

The last book before this was in 2004—The Ultimate Washington Baseball Trivia Book—as the Nationals were coming to Washington. It bombed. Not that many people had been living in Washington when the other teams were here, or were under age 10 at that time. So I had all these books in my garage. A couple of books were big hits, a couple were duds.

MVP Books in Minneapolis was doing a series of books on NFL franchises. They approached another writer, who passed the project on to me. This was in the summer of 2010. I was given an advance. The team had been so lousy. I had to write 70,000 words in four months, while working full-time during the height of football season, raising two kids, taking care of the dog. A lot of it was in my head, a lot of it was in books I’d already written, but none had taken the Redskins back before 1961 at D.C. Stadium.

I was researching the first 30 years of the franchise. 1962 was the first year they had a black player. The stadium was on federal land, and the Kennedy administration [got involved]. Every other team had a black player. The owner was a racist. There was no other team south [of D.C.] until the Cowboys. There are still Redskins fans in South Carolina, North Carolina, Mississippi, because their parents were fans. In the late 1930s, early 1940s, there were no black players [in football], and the Redskins were one of the best teams. Then they declined; from 1945-1971, the Redskins were not in the playoffs. That was [one of the reasons].

A: This has been going on for a long time, since Jack Kent Cooke was the owner. It goes back to 1992, when the Super Bowl [Redskins v. Bills] was held in Minneapolis, and there’s a Native American population near there and people came and were protesting; there was a lawsuit. 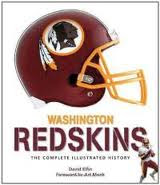 I’m not sure what’s prompted the [discussion at this point]. Maybe it’s because now they’ve made the playoffs, and they have [quarterback] Robert Griffin. Eventually they could lose, and lose their trademark. Dan Snyder wants to make as much money as possible, and you’d think it would be more lucrative—the team would look like the good guys [if they changed the name], and they could sell a lot more souvenirs with a new name on them.

It may take moving back to D.C. and the federal government getting involved. But I see no signs unless they lose a court case that it will change. Colleges [that have changed their team’s names] are different; they’re more PC, or an alumni says something.

Q: What has the reaction been to your latest book?

A: It came out in 2011; it did very well. In general, the reaction has been very positive, considering the team went 5-11 that year and Robert Griffin was not here. It helps that [former player] Art Monk wrote the foreword. I covered the team [when he was playing] and we have a Syracuse connection. The book signings would be me and Art Monk. People said, Oh, YOU have to sign it? I’d say, Well, I did write the book! It helps to have a very popular player in the Hall of Fame at book signings! I have a fairly objective chapter on Dan Snyder. Their [team] book is sold in the team stores. [Mine] has done fine, considering. It’s a hardcover coffee-table book, and my others were paperbacks. The publisher found great photos for the book.

Q: You’ve covered football and a variety of other sports. Do you have a favorite?

A: Baseball was my first love growing up. I fell in love with the Redskins when I was 11, which was the same time we lost the [Senators] baseball team. In football, every game means so much. It’s one-tenth the number of games that there are in baseball. As excited as everyone was about the Nats’ [win on opening day], they would have to go 10 games like that to equal one football game. Every game in football means more; when the stakes are higher, it means more, and it’s more fun. There’s really something American about it too.

A: No, I’ve mulled a number of ideas [but am not working on anything right now].

A: With the first book, we were all relatively young journalists. It was called Hail to RFK!. It was the last season the Redskins were playing at RFK, where they had been so great. But 1993-95, they were lousy. ’96 was a little better—they were 7 and 1, and then they lost the last 6 of 7 games. That’s when the book was coming out. We had a deal with the Redskins to sell books at the stadium on December 22, 1996. It meant nothing [in terms of the playoffs, etc.]. The Redskins crushed the Cowboys, and people were so hyped to have anything that said RFK on it, that the books were gone before the game even started.

The next book [America's Rivalry! The 20 Greatest Redskins-Cowboys Games] came out the following year, about the Redskins-Cowboys rivalry—both teams didn’t make the playoffs, and the book tanked.
[Another book] was about Maryland basketball. 2001-2 was their last year at Cole Field House, and they won the national championship. The athletic director wrote the afterword, and the coach, Gary Williams, wrote the foreword. It was sold at Cole Field House, and the book sold like hotcakes. In April, they won the championship. Two months later [at a banquet], Lefty Driesell was coming back on campus. I wanted to thank him for being a part of the book. I talked to him, and Gary wasn’t there, so I was getting ready to leave. Then he shows up, and grins, and asks why [Maryland] won the championship. He said, Book sales! It’s been fun doing these books. It’s not like I’ve ever had to write about something I don’t have a connection to.