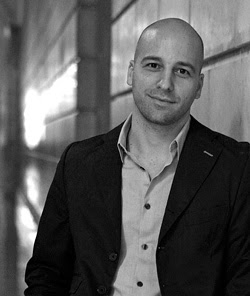 Christopher Castellani is the author of three novels, A Kiss from Maddelena, The Saint of Lost Things, and his latest, All This Talk of Love. He is the artistic director of the creative writing center Grub Street, and he lives in Boston.

Q: This is your third novel about the Grasso family. Why did you decide to stick with the same characters, and are you planning to write about them again?

A: It was important to me to complete the arc. My first book was about life in an Italian village during World War II; my second was about immigrant life in the U.S. in the ‘50s; if I didn’t continue by exploring the tensions between the first generation and their parents, and how living in the U.S. for most of the twentieth century affected all of them, I wouldn’t be telling the entire story. Now that the arc is complete, I am moving onto other characters, though something tells me I will always be writing about family in some way.

Q: Part of the book's plot involves the idea of a family trip to Italy. Was that, or anything else in the book, inspired by your own family? 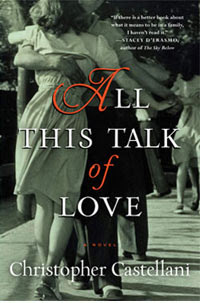 A: Again in the interest of completing that arc, I needed the ancestral village to be a big part of the story. My parents are Italian immigrants, and they took me and my siblings back to their village (Sant’Elpidio, on the Lazio/Abruzzo border) many times, often for a month at a time. Each visit was an emotional roller coaster for my parents, marked by intense longing and tension and guilt and riotous joy. Those are good ingredients for a novel, I thought.
But because I didn’t want to write too much of what I already knew, I imagined how it would have been if the Grassos had never gone back at all. I used the entire narrative of All This Talk of Love to explore the different relationships each characters had to the village and to the idea of the village. As you know, for most of the novel, the reader doesn’t know if the Grassos will make it to Italy at all…

Q: What do you think the character Tony signifies for each of his relatives, and what is his overall importance in the book?

A: The death of Tony, the oldest son, the first son born in the new country, haunts every character in All This Talk of Love and is an important catalyst for a number of changes in the Grasso family. Tony commits suicide at fifteen for reasons only his father, Antonio, thinks he knows, and yet Antonio won’t share his grief or his knowledge of the circumstances with his wife or children.
In fact, the Grassos rarely mention Tony at all. Such behavior is consistent with many Italians, who will wail and scream at funerals and literally throw themselves on caskets, but then, immediately after, direct all their grief inward and never speak of the loved one again. 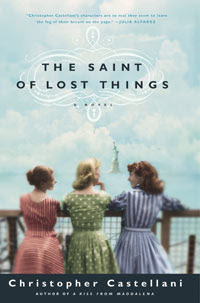 Tony’s death set his best friend, his sister Prima, on a dangerous path; by the time we meet her in the novel, she’s gotten her life together, but her obsessive relationship with her sons is a direct result of the loss of Tony. Maddalena, Tony’s mother, channeled nearly 100% of her grief into love for Frankie, the son she gave birth to just two years after the suicide.
As for Frankie himself, he is aware that he can’t compete with Tony for his parents’ love and affection and struggles to understand his place in the family.

Q: Why did you decide to call the book All This Talk of Love?

A: As an excellent reader pointed out, the Grassos are a family that talks a lot, but doesn’t listen to each other. They have strong opinions about how everyone else should behave, and how the world should work, and how people should manage their responsibilities. Each thinks she or he understands love, but each struggles with relationships.
Indeed, love is at the core of this family, and it’s what keeps them together while continually threatening to tear them apart. I wanted the title to suggest all of this, and to contain the idea that saying you love someone is crucial, but also quite inadequate.
Q: What are you working on now? 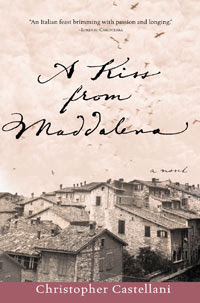 A: I wish I could tell you more about my next novel other than that is does involve Italy and Italians, and will probably involve a family or two, but I don’t want to jinx it.

A: I am the artistic director of Grub Street, one of the best writing centers in the country. If any of your readers are interested in becoming better creative writers, they should check out Grub Street’s 600+ annual programs at www.grubstreet.org.
Also:  my publisher, Algonquin Books, will soon be starting a Tumblr where readers can submit photos of their own trips back to their homelands. On this Tumblr will be some rather hilarious pix from my trips back to Italy as a kid. Keep checking back at http://algonquinbooks.tumblr.com/. In the meantime, readers can keep up with me at www.christophercastellani.com. I’m very open to visiting in person or Skyping into book clubs.
--Interview with Deborah Kalb
Posted by Deborah Kalb at 8:05 AM