Achy Obejas is an author and translator who lives in Chicago. Her books include the novels Days of Awe and Ruins, and the collection We Came All the Way From Cuba So You Could Dress Like This?.

Q: You were born in Cuba and have gone back many times, and much of your work deals in some way with that country. What is your sense of what's likely to happen there in the coming years, and do you think the relationship between Cuba and the United States could change substantially?

A: That's the magic question. No one knows. There have been a million lost opportunities, and so long as the embargo is in place, there'll be a million more. The relationship has nowhere to go but up.

Q: In addition to writing your own books, you have worked as a translator, including translating Junot Diaz's The Brief Wondrous Life of Oscar Wao into Spanish. How difficult was it to translate that book, and what was the process like? 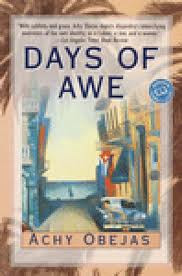 A: It was an amazing challenge. The process was a complicated one. I'd do a chunk, send it to Junot, then he'd send it off to a close knit group of Dominican friends with varying degrees of fluency in Spanish. Their notes would frequently contradict but I'd pick my way through it and make decisions. Junot intervened only when there was a very specific thing he wanted. He supported my decisions 100 percent.

Q: Questions of Jewish identity are part of your novels Ruins and Days of Awe. How much do you identify with Judaism?

A: I consider myself of Jewish heritage. I sometimes fast on Yom Kippur, I try to attend Kol Nidre (it's been a bit), and I celebrate Passover with a big festive seder. We had 60 people this year.

A: Since when? Things are getting better on all fronts, in both places, in spite of specific events that sometimes push back. It's two steps forward, one back, but overall, forward.

A: Too many things. A translation of Cabrera Infante's Heavenly Bodies into English, two anthologies, and two separate long form projects still in their infancy.