John Sledge is the author most recently of Southern Bound: A Gulf Coast Journalist on Books, Writers, and Literary Pilgrimages of the Heart.  He spent many years as the books editor for the Mobile Press-Register, is a member of the National Book Critics Circle, and serves as senior architectural historian for the Mobile Historic Development Commission. He lives in Fairhope, Alabama.

Q: What do you see as the future of book reviewing?

A: It's hard to know for sure how things will settle out. We're in a period of such tremendous flux and churn that everything's still sliding around. One of the most promising trends I see though is the emergence of various literary blogs--the best of them very good indeed--that have sprung up in recent years. Sites like Bookslut, The Elegant Variation, and of course your own great site are consistently excellent and incredibly rewarding for readers. These sites have been much praised and are building respectable followings.

What I fear may be going from the broader culture for good is the concept of the literary critic as an authority figure with a significant reach through national publications. The kind of heyday enjoyed by the likes of Alfred Kazin and Jonathan Yardley probably won't come again and that's a pity. There are some great young critics out there of course--James Wood who regularly appears in the London Review of Books springs to mind--but their audience is diminished, fragmented and more distracted than ever. And in the United States in particular, books just don't seem to matter as much to the population. Plenty of people still read seriously, but they are trending older and every survey shows their numbers are in free fall.

Q: One of the sections of your book involves literary pilgrimages you’ve made. Do you have a particular favorite location?

A: I would have to say Oxford, Mississippi. Not only do you have the ghost of Willam Faulkner stomping around--his house and burial site are must-see--but one of the finest book stores in the South--Square Books--is perched upon the town square. The University of Mississippi features some lovely architecture as well as the fabled Grove, a ten acre shaded area popular with tailgaters on football weekends. They're football mad there of course, it's an SEC school after all, but they also pay attention to their literary heritage and honor it. The people are incredibly warm and friendly, and there are some wonderful restaurants. It's unlike any other Mississippi, or Southern town, and still harbors some good writers like Tom Franklin, Beth Ann Fennelly, and Jack Pendarvis. 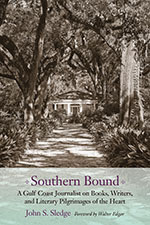 A: I really liked Barksdale Maynard's Architecture in the United States, 1800-1850 for its forceful argument that nineteenth-century American architecture, especially the Greek Revival style, owed far more to English precedent that has been previously acknowledged. Enthusiastic interpreters tended to view the American Greek Revival as a robust declaration of cultural independence from England in the wake of the Revolution. The belief was that the Greek Revival, harkening back to the democratic traditions of the ancient Athenians, was viewed as the perfect new national symbol by the young American Republic. Maynard shows this to have been mostly fiction. The Americans liked the new style because it was popular in Europe, and especially England, and they wanted to be in the aesthetic mainstream.

I also really liked Thomas S. Hines' The Architecture of Yoknapatawpha. Hines, an architectural historian in California, is a distant Faulkner relative, and his book is the only one I know to really examine how Faulkner used architecture in his novels. It's a wonderful book, informative and readable with great photographs that Hines took on his Mississippi rambles.

Q: Your book is titled Southern Bound. What do you think makes the Southern literary tradition unique?

A: Well, I don't think it's so distinctive anymore, though plenty of contemporary Southern novelists are still trying to exploit that heritage. I guess I'm guilty of that too! We're more like the rest of the country now, for good and ill. But place still matters here very much.

The next Faulkner won't write like Faulkner, or about the same things. It's exciting to see some Southern writers grappling with the new immigrant landscape that's beginning to appear in the region. When I was a kid growing up in the Birmingham area, we had black folks and white folks. Now there are growing Hispanic, Indian and Korean communities with their own traditions, churches and so on. That's ho-hum to people up East and in California, but other than some urban enclaves like New Orleans, it's utterly new here. That's the new South crying out for good writers, not the familiar shacks and mules of yesteryear.

A: Yes, I'm writing a history of the Mobile River, which flows into Mobile Bay. It's only about 50 miles long, but the larger Mobile River Basin is one of the larger river systems east of the Mississippi and drains much of Alabama and a fair chunk of Georgia and Mississippi. My inspiration is that wonderful "Rivers of America" series published through the middle of the twentieth century. Those volumes are treasures with great woodcuts and a fine literary tone. I'm under contract with the University of South Carolina Press.

As time allows, I'm also puttering on a novel, Isolatoes, the name coming from Moby Dick and Melville's description of the Pequod's crewmen as "isolatoes," or islands unto themselves. It's based on various eccentric characters I've known over the years who for one reason or another just didn't fit into the mainstream too well. It's the only fiction I've done and I find it very liberating.

A: I love, love, love Henry James--the middle period, not the difficult later stuff. They didn't call him the master for nothing. His literary criticism just sparkles.