Sara Mansfield Taber is the author of Dusk on the Campo: A Journey in Patagonia, Bread of Three Rivers: The Story of a French Loaf, Of Many Lands: Journal of a Traveling Childhood, and, most recently, Born Under an Assumed Name: The Memoir of a Cold War Spy's Daughter. She lives in the Washington, D.C., area.

A: There were several reasons. My father became disaffected, and when he retired, he became very depressed about how he had spent his life. I had to go back and get a sense of how his career had affected him. I was very interested in writing about something that hadn’t been explored. We’ve all seen how glamorous the foreign service life is, but the underside hasn’t been broached. I wanted to write about the harder parts of [a life of] espionage. Also, I wanted to explore all the places I had lost.

Q: During your childhood, you did experience a great deal of loss as you moved from one place to another. How did that affect you?

A: It was such a mix. The impact was incredibly rich, fun, amazing, inspiring, and also just packed with loss. We didn’t talk on the phone long-distance, letters took a month to arrive, so when you left someone, you left forever. I came away with a huge trunkful of loss that was sort of unprocessed. People weren’t that good back then at processing loss. 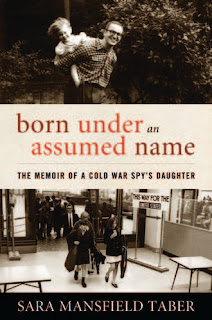 Q: What was your family’s reaction to your writing the book?

A: Both of my parents have died and I don’t have much contact with my brother; he’s followed the family tradition and travels all over the world, and I don’t see him. But my father thought that everyone had the right to their story. I’m sure that all family members have trouble when [they’re written about in a book], but he believed I should write it.

Q: How were you able to remember all the details?

A: One thing, when you move so much, is that when you travel, you’re blasted with new sensory experiences. Because I traveled, I had blasts of experience. Also, I looked at photos. And once you turn on the spigot of memory, it comes back. I had to use my knowledge [of the times] to re-evoke what happened.

Q: You write in your book, “We are all fictions for one another.” Why do you feel that way?

A: I feel like I want to honor and not violate all these people I wrote about. They didn’t ask to be written about. My view of them is different from their view of themselves. I wanted to give even more than a nod to that. Everyone has their own view of the truth; this is just mine.

A: I’m in a wandering-around phase; I’m writing essays and memoirs. I’m writing about my mother now.

A: Another part of the book is the whole arena of espionage that I found myself compelled to explore. I really wanted to explore the culture of secrets, silence, and stoicism on the spy and the family members. I also felt compelled to examine America’s role in the world. The different countries we lived in had different reactions [to the United States]. Those are two areas I’ve struggled with, and the book gave me a way to sort it through.

--Interview with Deborah Kalb. Sara Mansfield Taber will be participating in the Temple Sinai Women of Reform Judaism Authors Roundtable in Washington, D.C., on April 27. For more information, click here.
Posted by Deborah Kalb at 11:22 AM