Rachel L. Swarns, a correspondent for The New York Times since 1995, is the author of American Tapestry: The Story of the Black, White, and Multiracial Ancestors of Michelle Obama. She lives in Washington, D.C.

Q: Why did you decide to write about the history of Michelle Obama's family?

Q: Did you expect to find out as much as you ended up discovering?

A: It was a bit of a leap of faith. I really had no idea what the story line would be, and where the reporting and research would lead me. But I thought it would be fascinating.

Q: What does Michelle Obama’s family's story tell us about the history of the United States?

A:  I think it tells us that we’re more connected, more linked than we think we are. Mrs. Obama’s family is very much a tapestry. Some of her ancestors were African Americans who toiled on rice plantations [as slaves], some were mixed-race people who were free before the Civil War, some were Irish American who fought for the Confederacy. There were Native American strands. There were some suggestions of ties to Jewish families. It shows that the notions we have of folks being so separate really isn’t the case. Some ties emerged during a very painful part of the past.

Her ancestors fought in the Revolutionary War, in the Civil War. They witnessed slavery, they witnessed emancipation, Reconstruction, the rise of segregation, going from slavery to the White House in five generations. Her family serves as a lens [on American history]. 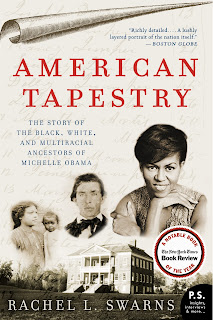 Q: What was the most surprising thing you learned?

A: There were so many surprising things! Mrs. Obama’s great-grandmother in the late 19-teens and early ‘20s lived just blocks away from the Hyde Park home the Obamas have today. Mrs. Obama talks of herself as a South Side girl, but her great-great-grandmother arrived in Illinois in the 1860s, far earlier than the family knew.

Q: Did you get a sense of the First Lady's reaction to the book?

A: Sadly, the First Lady doesn’t do book interviews. But I had covered her during her first year in the White House, I knew her staff, and I briefed her staff along the way. I did talk to her family members—we did interviews, they shared their memories and their DNA. I have not had a conversation with her [about the book]. I know her family finds it fascinating, and I hope she does too.

Q: While Michelle Obama declined to be interviewed for the book, you did speak to many of her relatives. What impact has the book had on those relatives, particularly the two women, Jewell Barclay and Joan Tribble, who agreed to undergo DNA testing in the course of your research?

A: It’s been quite interesting for them. It’s been kind of a journey for them, too, through their memories and learning bits and pieces over the two years that I was working on it.

Joan participated in a reunion of sorts. In June 2012, the town where Melvinia was enslaved erected a monument in her honor. Joan was one of the members of the family [who attended]. It was very meaningful for both [the black and white] sides of the family.

Q: Did Jewell come to the reunion?

A: No, she lost her brother right before the book came out. And she’s in her 80s—she made it clear she is not getting on a plane. She’s fascinated by what she learned about her family, but she’s at a time in her life when she’s quite happy to be where she is.

Q: Are you writing another book?
A: I’m back at The New York Times—I’ve been back for a year now. I’m not working on another book now. But I’m so mesmerized by this history, I think often about doing another book at some point, another deep dive into the nation’s history.

--Interview with Deborah Kalb. Rachel L. Swarns will be participating in the Temple Sinai Women of Reform Judaism's Authors Roundtable on April 27. To learn more about the event, please click here.
Posted by Deborah Kalb at 9:11 AM