Arun Chaudhary was the first official White House videographer, a job he started at the beginning of President Obama's first term. He is the author of First Cameraman: Documenting the Obama Presidency in Real Time, and now is a fellow at George Washington University and the senior vice president of communications at Revolution Messaging.

Q: How did you come to be the first official White House videographer, and why did you decide to write a book about your experiences?

A: I answered an ad in Craigslist that said, "videographer needed ... discretion required" ... actually, that is not true. Although I had always been passionate about politics, my focus as a filmmaker was on fiction and I was working primarily in indie film in New York City.

It wasn't until a friend, Kate Albright Hanna, who was a long format producer at CNN, was asked to be the video director of the Obama campaign, that I had an "in." Journalism and politics have much more of a revolving-door situation than politics and the arts.

While at the White House, everyone always said, "I hope you are writing this down" but I wasn't; when you are in the bubble you are too focused on what you are doing. It wasn't until I left that I really had a perspective on what a unique experience I had, being at the nexus of so many interesting things at once: technology, art, and of course, the presidency.

Q: Was there anything that particularly surprised you during your time on the 2008 Obama campaign and in the White House?

A: How unglamorous things really are behind the scenes. We think of the presidency as being a series of state dinners but in reality, the president spends a lot of time in loading docks and freight elevators. The smell I most commonly associated with traveling with the president was stale beer on hotel loading docks. 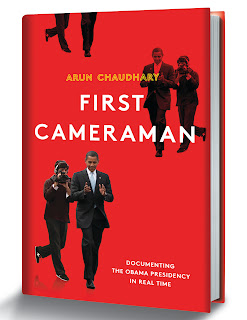 Q: You write that President Obama's "authenticity...allowed voters to see him as he really is and judge him accordingly. All I really did was hold the camera." How important is authenticity to a candidate or a president, and what was it like to spend that much time close-up with Barack Obama?

A: Authenticity is extremely important quality in a politician because it is the one that Americans look for the most in their leaders. Not every politician possesses this quality, and they have other ways of communicating, but for someone like Barack Obama, who is one of those rare souls who is the same on and off camera, having a videographer is an extraordinarily effective way to speak to citizens. The more time you spend with Barack Obama, the more you marvel at how much he is like the person you see on TV.

Q: How would you compare the role of a White House photographer to a White House videographer when it comes to documenting the president's activities, presenting a particular image, and preserving historical moments?

A: Photography and motion pictures are such different mediums. Movies are the most immersive art form; they are one of the few things we experience consuming enough to seem real. While a photograph can have many perspectives, movies usually have one. A photograph is historical, but footage is history.

A: Right now, I'm writing an afterword to First Cameraman for the paperback edition. So many of the things I had predicted for the 2012 elections went exactly as I foretold, which is very gratifying, but my role in the 2012 election was not what I expected, so I'd like to unpack the dark art of negative ad making a bit for folks.

--Interview with Deborah Kalb. Arun Chaudhary will be participating in the Bethesda Literary Festival, April 19-21, 2013. For a complete schedule of events, please click here.
Posted by Deborah Kalb at 2:42 PM