Annie Barrows is the co-author, with her late aunt, Mary Ann Shaffer, of the bestselling novel The Guernsey Literary and Potato Peel Pie Society. She also is the author of the children's series Ivy and Bean, and The Magic Half, a novel for kids.

Q: You have written for adults and for children. Do you prefer one type of writing over the other, and if so, why?

A: I get this question a lot, and I always have a tough time answering it. Usually, I try to avoid the whole thing by saying that I like children readers better because they’re cuter. Which is true—the cuter part, I mean—but evasive. This time, I’ll attempt a real answer. Here’s what I like about writing for kids: you must know how it’s going to end when you begin. You have to keep the writing tight; you can’t be scampering down tangential paths or introducing subsidiary ideas that don’t pertain to the story. It’s a little like poetry, in that the form demands distillation and a very clear mind.

Q: Did you expect The Guernsey Literary and Potato Peel Pie Society to be such a huge bestseller, and what about it do you think appealed to so many people? Would your aunt have been surprised at the reception the book has had?

A: Well, we had a hint that it was going to be popular when there was an auction for US publication rights. And we thought it boded well that foreign rights were sold to twelve publishers before the book was edited. And then when the booksellers who read the advance copies kept raving about it—that seemed positive. But nothing, nothing, could have prepared me for the tidal wave that occurred when the book was published.
Why do I think the book had such appeal? Because it’s exactly like Mary Ann.  I never in forty-five years encountered anyone who could resist Mary Ann’s storytelling.  She delighted, entertained, and enchanted everyone she ever met. Just like The Guernsey Literary and Potato Peel Pie Society.

The one person who might not have seen it like this is Mary Ann herself. I think she’d have been shocked at the uproar. She was, actually, a rather shy person, and she lived a pretty quiet life, so I doubt she would have enjoyed touring and being interviewed. But she would have loved hearing from all the readers who adored the book, and I like to think she’s been reading those letters and emails over my shoulder for the past five years.

Q: You write on your website that you're a big fan of Edward Eager, who wrote Half Magic and other classics, and that the title of your children's book The Magic Half is partly inspired by Eager. What about his books do you particularly like?

A: I am a big fan of Eager in particular and what I call domestic magic in general. What Eager does is place magic in the context of regular life—as opposed to fantasy, in which the tale occurs in another, magical world.  As a kid, I much preferred domestic magic, because it helped me maintain my hope that someday, somehow, I’d have a magical experience myself.  I also love Eager’s books (all of them!)  because they’re character-driven, which is rarely the case in a magic story. All too often, writers of magic stories opt to resolve all issues by means of magic, because they can and because it’s easy. Unfortunately, it’s also boring. 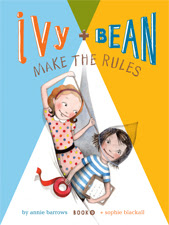 Q: How did you come up with the idea for your "Ivy and Bean" series for kids?

A: When she was seven, my poor kid ran out of books to read. I was outraged. I mean, I’ve run out of books to read, but I’m fifty.  She had only been reading for a year, and it didn’t seem fair.  I was in a total snit until I thought, Hey, wait, I’m a writer. I can write her a book.  So I asked her whether she’d rather read a book about real life or about magic, and she said she wanted to read a book about herself. Cool, I thought. I can do that. And I did.

Q: You also have written several books under the name Ann Fiery. Why did you choose to use a different name for those books?

A: My real name is Ann Fiery Barrows. Are you getting that? My middle name is Fiery. Fiery.  What a happening name! And it’s buried there in the middle, where no one ever sees it.  When I started writing, I thought, Here at last is my chance to display my cool middle name. Ann Fiery.  Oh my god, what a fantastic pseudonym: Ann Fiery. Ann Fiery, author of the best-selling...
Yeah, right. No one tells you about the pseudonymic cauldron of doom. They just let you go right ahead and throw yourself into it. The pseudonymic cauldron of doom is MAJOR SOCIAL ANXIETY caused by not knowing whether you’re supposed to be acting like an author or yourself.  E.g.: when signing a book for someone who knows you as Annie Barrows, are you supposed to sign “Annie Barrows” or are you supposed to sign “Ann Fiery”? And if you do sign “Annie Barrows,” does the owner technically possess an autographed book or not? And what if people start calling you Ann, which you’ve always loathed? And what if people start asking for Ann on the phone, heretofore the signal that you can hang up because only salespeople call you Ann, but now...
And before you know it, you’re fleeing madly through darkened alleys, grunting and shrieking.

A: Ooooh, the tenth Ivy and Bean book is coming out this fall! It’s called Ivy and Bean Take the Case, and it’s more or less Ivy and Bean’s answer to Nancy Drew. I think it’s totally hilarious.

My next adult novel will be coming along in Spring 2014. It doesn’t have a title yet, but I can tell you that it’s set in 1938, and it’s about a girl who’s working on the Federal Writers Project. She’s sent, protesting vigorously, to a small Southern town to write its history, and finds herself boarding with a family that turns out to have played quite a big role in said history. Everyone who’s ever read the manuscript describes the family as terrifically eccentric, which I don’t understand at all. They seem completely normal to me. Also funny—they crack me up.  They’ve been my best friends for the last five years, and already I’m missing writing about them.

Q: Anything else we should know?
A: I’m very tall.*