Nancy Hayes Kilgore is the author of the new historical novel Bitter Magic, which is based on the life of Isabel Gowdie, who was tried for witchcraft in 1662. Kilgore's other books include the novel Wild Mountain. A psychotherapist and former parish pastor, she lives in Burlington, Vermont.

Q: What inspired you to write a novel based on the life of Isobel Gowdie?

A: I started an ancestor search and found a haunted graveyard! Some of my Scottish ancestors in the 17th century were Covenanters, a group of idealistic Presbyterian reformers who instigated the Scottish Reformation. In the end they were defeated, captured, left to die, and were buried in an Edinburgh churchyard.

When I visited this Covenanters Graveyard, now Covenanters Prison, I experienced a supernatural moment – an overwhelming sense of dread. Then someone told me that the graveyard was haunted – by the ghost of the cruel prison warden. The City of Edinburgh closed and locked it off, due to so many weird and harmful experiences there.

These same Covenanters, though, who were tortured to death in an Edinburgh prison, I discovered, had been prosecutors at the heart of the witch craze. The famous witchcraft trial of Isobel Gowdie occurred in one of their communities.

As a Presbyterian minister myself, a feminist and a Starhawk fan, I was intrigued. Here was a story of conflict between two groups at the roots of my own spirituality, the Protestant Christian and the feminist earth-based. My research began.

Q: What did you see as the right blend between the historical facts and your own fictional characters as you wrote the book?

A: This was my first historical novel, and most of the characters were based on real people. I spent a lot of time trying to understand their world views. 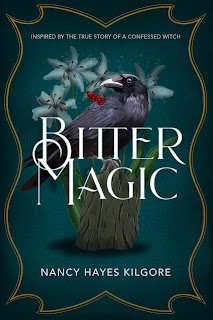 With the Christians, there was a strain of Protestant mysticism blended with an austere absolutism that felt very remote. On the other hand, the earthy spirituality of the herbalists and healers was part of a magical world view that is also remote to our 21st century understanding.

I wanted to explore these more complex and nuanced worldviews than we normally read about in witch novels.

The biggest challenge was translating them into understandable language, bringing the modern reader into that world.

A: I read lots of books, lots of online research, and a trip to Scotland. In Scotland I was surprised by how small the castles really were. And it was exciting to learn that Isobel is still known in the area as “the witch of Auldearn.”

One day I went on a search and found the actual fairy mound, the Downie Hill, where Isobel claimed to meet with the fairies and elves. It is still there, unknown by locals and hidden in a woodland.

A: I came up with a list of titles and asked my Facebook friends to vote on them. Bitter Magic won, and I liked it best, too.

To me it signifies the allure and delight of magic and the fairy world, but also the flip side when magic is practiced for harm. Bitter also evokes the cruelty toward the people who were legally tortured and murdered as witches.

A: I’m working on a story about my grandmother and mother when each was in her 20s. It was inspired by reading a trove of my grandmother’s letters and discovering that she was a lively contrarian and flirt, so different than the image from the family legend.

She was a suffragist and had tuberculosis in the early 1900s, and died when my mother was born, at the beginning of World War I. My mother was a navy wife during World War II. One was young during WWI and a pandemic, the other during WWII.

What were the similarities and differences in their lives and personalities as they lived through their 20s in these two war periods? And if I’m bold, I might include timeline number 3, about me in my own youth during the chaotic ‘60s and ‘70s.

A: My author’s notes at the end of Bitter Magic include a description of the real historical people and how they were transformed in the story.