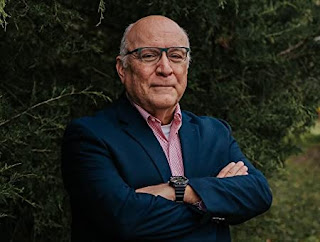 Joe Diorio is the author of the new book A Few Words About Words: A Common-Sense Look at Writing and Grammar.

Q: What inspired you to write A Few Words About Words?

A: The book traces its roots to a compilation of my monthly email newsletter of the same name. Each issue is only about 700 words or so. I had been writing the newsletter on and off for nearly 30 years and figured I may have enough material for a book.

More important, though, is that I wanted to reach a broader audience (The newsletter had a readership of about 5,000 at the time; it’s up to about 7,000 now. You can subscribe at my website - Joe Diorio Writer, editor. – Words on paper. That's me. (joedioriowritereditor.com)) and I thought having a book could create opportunities to share a message to a bigger audience.

In my case the message is that yes, I’m bad at English grammar, but with work and perseverance I – and anyone for that matter – can become proficient. I decided to inject humor into the book to make it unique.

There seem to be plenty of books about overcoming educational deficiencies. Tara Westover’s Educated comes immediately to mind, and I don’t want to replicate that. I wanted to create something that tells readers that yes, writing can be hard sometimes. But writing can also be fun.

Q: You write, "I absolutely stink at English grammar. I always have." What led you to pursue a writing career, and how do you see grammar fitting into your work?

A: When I got serious about writing the book, I realized that in one fashion or another I have always been a writer.

When I was only 10 years old I would create my own comic strips, doing the writing and illustrating myself. One of my first comics was “The Man Without an ‘S’ on his Chest.” He was kind of an anti-Superman.

He had some superpowers, but he always had to struggle to defeat the bad guys. (I’ll let someone else decide if that was a metaphor for my own shortcomings as a writer. Hey, I did say he almost always won in the end.)

He was more interesting to me because he couldn’t just swoop in like Superman and win. He had to work at it. And he sometimes was not successful.

I mention in the book that because I changed school a few times I found myself academically behind my classmates, especially in English. My family moved a few times from one town to another; no, we weren’t evading bill collectors, although sometimes I thought it may look that way. Dad was an early house flipper; we’d live in the house as he fixed it up.

It sucked being the one kid in class who was behind everyone else. I guess one way I overcame my own grammatical deficiencies was by writing. It was going back to those comic strips I used to write. (Is that like emotionally retreating? Carl Jung is never around when you need him.) It became my safe place, even if I was making a boatload of mistakes.

Knowing that I could put a phrase together led me to volunteer as a writer for a school newspaper, and later as a stringer for a community weekly newspaper.

When I investigated careers as a newspaper reporter, I learned that reporters are taught the principles of journalism (the five W’s – Who, What, Where, When, Why, and How) but no one every taught a class on English grammar. That sounded up my alley.

Of course, English grammar was a huge part of the job. But I wanted to stick with it. A friend gifted me Theodore Bernstein’s book about writing and that got me hooked on the intricacies of English.

And as I say, being able to express ourselves, even in a text message, is the crux of good communication. That’s been the case for me working as a news reporter, speech writer, corporate p.r. guy, and doing marketing communications for college recruitment efforts. 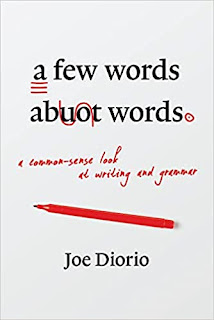 To this day I am amazed when someone says they don’t care about grammar. And I hear that a lot. Without being able to express ourselves we couldn’t get anything done!

Q: What impact do you think social media and other technology has had on grammar?

A: It’s a double-edged sword for sure. On the one hand technology in things like social media and texting has done a lot of damage to English grammar. I was amazed to learn that ending a text message with a period or ending an email by signing off with the word “Best” can be considered a form of hostility.

The good part of technology is that social media also encourages us to sit down and write. That’s good, even if we’re making grammatical mistakes along the way. It’s kind of like what a mother would say when her kid was only reading comic books: “Hey, at least he’s reading!”

Q: Who do you see as the perfect audience for your book, and what do you hope people take away from it?

A: Is saying “everyone” too much of a cliché? I find that the readers of my newsletter are people who work in the field of communications, marketing, public relations.

But in the book I use the phrase “language is society’s perpetual shiny object.” No matter who you are, what you do, or where you live, we are all fascinated with language. Why else do we spend so much time debating and discussing terms like “alternative facts” and “malarkey”?

We are fascinated with language and how it can be used. How it can affect the masses. I talk about language and grammar from an everyperson perspective, and I hope readers will agree.

A: Two books. One is dissecting the language that goes into communications surrounding a crisis. I was a victim of a mass shooting nearly 40 years ago. Well, it wasn’t a mass shooting since fewer than four persons died and that, too, is a part of the book’s discussion.

Not just the tragedy but that there are linguistic parameters put around what is and is not a mass shooting. By the way, I wasn’t shot, but along with 400 co-workers I was trapped in a building for several hours.

About a year or so ago I became caught up with the term “flyspecking,” which lawyers use to carefully look at the clarity and messages in what they write.

We flyspeck everything. We don’t call it a mass shooting unless four or more die. We carefully weight press statements. One hospital that had a mold problem in patient rooms insisted on referring to the mold as a “foreign substance.” (On some levels, that sounds worse!)

So I am taking that shooting incident, fictionalizing it, and writing about what goes into the array of messages that come out of the various forms of communication (social media posts, press announcements and statements, indictments, criminal complaints, etc.) that grow out of a crisis.

A second book I am working on is a writer’s version of Working. I am no Studs Terkel, but I maintain that we are all writers, and we go about it in our unique ways. This would be a series of interviews with everyday people who are writers.

Often these books interview those who have written a classic or a best seller. I’m interested in how everyone approaches the everyday craft. How did we get to the point that we no longer put a period at the end of a text? How does everyone approach writing and how are we handling new technologies around writing – Grammarly and groupthink writing tools like Google Docs?

I’m doing a lot of interviews to see what material I can glean from it all.

My catch phrase at the end of every newsletter is, “let’s write carefully out there, people.” And we need to do that. Sloppy writing, an overreliance on technology like spelling and grammar checkers, and emojis (my archenemies) can dilute our messages.

The New York Times ran a story about a baseball player’s contract being held up because an agent responded to a contract offer via text, using only a thumbs up emoji. Does that mean he agreed with the terms of the contract or does it simply mean he received the offer? The emoji could not convey an accurate message.

But as I say often in the book, I am digressing. Thank you for your interest.