Franz Nicolay is the author of the new novel Someone Should Pay for Your Pain. He also has written the book The Humorless Ladies of Border Control, and his work has appeared in a variety of publications, including The New York Times and Slate. Also a musician, he lives in California's East Bay.

Q: What inspired you to write Someone Should Pay for Your Pain, and how did you create your character Rudy?

A: He’s a type, you know? You build your characters (and the world around them) from someone’s arm, someone else’s legs, a chimpanzee heart you have lying around, and eventually they get up and start walking around on their own.

One of the weird things about the way the rock world works is that it is flooded with amateurs and semi-amateurs in their teens and early 20s, most of whom quit and get on with the rest of their lives, and a small number of whom have enough success to make a career.

Then there are some who fall through the cracks, who either overestimate their talent, or never catch a break, or simply have a ceiling on their appeal (Rudy towards the end of the book quotes Gertrude Stein on the tragedy of the minor artist, who has all the unhappiness and sorrows of a great artist but is denied the consolation of being one), or imbibe an ideology that they expect to last a lifetime but is just not built for that.

To steal an image from Aaron Cometbus, you feel that you’re marching alongside all your friends, part of a huge column, and then all of a sudden you look around and you’re on your own, they’ve all peeled off along the way.

So someone like that becomes a useful vehicle for thinking about other ideas that interest me: the anxiety of the influencer, changing mythologies of masculinity, and sin and redemption in a secular world, and so on. 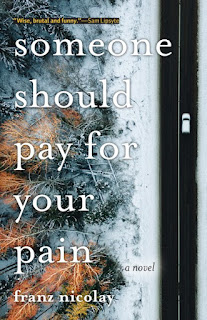 A: The working title for a long time was “The Morris Column,” which no one liked except me—a friend told me, accurately, “You’ve mistaken your central metaphor for a title.”

So I went through the book looking for other options and settled on the tagline from the billboard for a personal-injury law firm that Rudy and Lily see while driving. I thought it succinctly captured one of Rudy’s main issues, which is projecting blame for aspects of the way his life has turned out onto other people.

Q: As a writer and musician, how do you see the two complementing each other?

A: The best way I can answer that is to say that on my solo records, I was gradually becoming more interested in the words; and while you can squeeze a lot of words into the strictures of bars and rhyme eventually they can’t bend any more, and the page ends up being more forgiving.

Some lines go into a generic text file that could end up either in songs or in fiction (or both—I will occasionally repurpose material).

I do miss, in writing books, the opportunity to get short-term feedback. It’s hard to commit to a long writing project knowing that you’ll be working alone on something that no one will read for even more years after you’ve finished it—make you want to just pick up an instrument and find an audience.

A: I think that aspect of it is out of my hands. I would say that I’m curious to see how readers interpret it; I have a pretty good idea of the kind of book I think I wrote but I don’t suppose in the end that matters much.

A: I’m working on a book of nonfiction for University of Texas Press’ American Music Series called Band People: Secret Weapons, Hired Guns, and the Character Actors of Popular Music, about the working and creative lives of the musical middle class.

A: If there is, it’ll be at www.franznicolay.com!