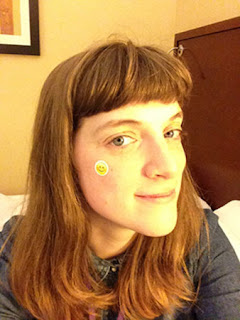 Laura Knetzger is the author and illustrator of the new children's book Five Magic Rooms. Her other books include Bug Boys. She is based in Seattle.

Q: What inspired you to create Five Magic Rooms?

A: Five Magic Rooms is inspired by my memories of going to a friend’s house for the first time as a kid. The feeling of trepidation at being at a different family’s home, of not knowing their private rules, but I wanted to depict it as becoming full of joy rather than fear.

I also liked the idea of a mansion full of stuff that appeals to the five senses.

Q: The Kirkus Review of the book calls it "An engaging friendship story full of imaginative details for young explorers." What do you think of that description? 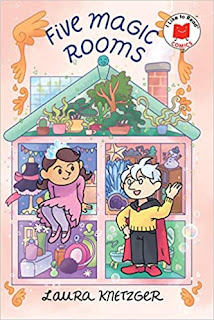 A: I like it! I’m glad readers can pick up on all the tiny details I drew in the house. I wanted there to be a “game” element of finding little fun things in the mansion as you read.

Q: How did you develop your artistic style, and how did you first get interested in creating children's picture books?

A: For Five Magic Rooms I really wanted the art to evoke cartoons I like: sunny, bright, bendy shapes, and a sense of playfulness.

Sometimes I think that my artistic style is a mishmash of every image I’ve ever seen, filtered through my tastes. I’ve always been interested in kids’ books because they’re a place where fantasy, fun designs, and wild leaps of logic are the default.

Before working with Holiday House, I self-published an all-ages comic series called Bug Boys, so I’ve been working in kids’ media even before it was my job.

A: I hope they can feel a little less worried about going to new places and instead see it as containing the joy of discovery.

A: I’m working on a middle grade graphic novel (also about friendship and trying new things) and I’m always thinking of new stuff for my comic series Bug Boys.

A: There are so many great picture books and kids’ comics coming out right now. It’s a great time to be a reader. Along with going to your local bookstore to get books, I recommend checking out small press comics shows to find even more fun stuff by independent artists to read.