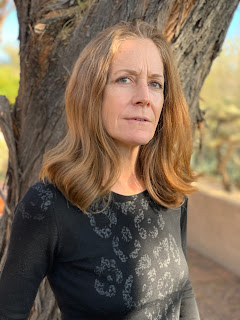 Jackie Townsend is the author of the new novel Riding High in April. Her other books include The Absence of Evelyn. She lives in New York City.

Q: What inspired you to write Riding High in April?

A: Many years ago, before I became a writer, I worked for an investment firm in Silicon Valley writing business plans for start-ups. There was only one creed, the valuation had to be BIG, otherwise what was the point.

Fast forward 20 years, during which time I became a full-time writer who cheered her husband on from the sidelines as he continued the tech pursuit.

The unicorns, the evangelists, the press focusing on the few but not the many, I’ve become so tired of hearing only about Elon Musk, Steve Jobs, and Mark Zuckerberg.

I wanted to write a story about the guys, and a few gals out there, fighting to keep the nuts and bolts of technology churning, growing, changing, and evolving. Under-the-radar guys, and those few gals, working from all corners of the world, dedicated day in and day out so that we users can go about our blissful, screen-filled days unfettered.

These guys strive just like everyone else, they too want to build something great, have been trying since the dawn of time. These guys are as old as time. There is no Silicon Valley cover story about these guys.

A: One evening, my husband and I were sitting at our kitchen island with our wine, or possible something harder, listening to music as we sometimes do, and he had begun down a rabbit hole of streaming those particularly dispossessing songs, those from deep in his past, or distant future, one doesn’t always know, when all of the sudden he starts blasting Frank Sinatra’s, That’s Life.

We were in some kind of mid-pandemic mood, and for this or other reasons the lyrics beat down into our marrow, a connection between us so deep it hurt.

Those lyrics said it all.

Shot down in May

Back on top in June.

A: Spoiler alert. Not happily, that’s how I knew it would end. Vaguely that is. This is my writer’s reality when I start a book. I don’t have an outline, I have an idea, a visceral scene in my head, one usually involving an intense exchange, spoken or unspoken, between two people, and the writing moves from there. 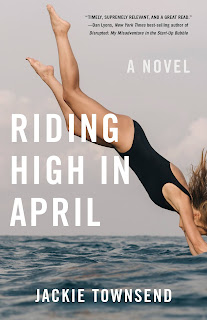 My stories are about relationships, familial, filial, romantic, and how do relationships end? Anticlimactically, that’s how. We each sail off into our own version of a sunset and that’s the feeling I want to evoke when I end a book.

It’s not a bad feeling. For me, it’s cathartic. Heartbreaking, yes, but more so cathartic, this feeling that we are not alone.

It’s why I also tend to read books that do not end well, because by not ending well it’s as if they’re not ending at all, and, by such, they become a part of me. They live with me forever. Like Tolstoy’s Anna Karenina or Sigrid Nunez’s The Friend.

I wrote two different versions of the book before this third version came to be. In the first version, the couple in the story adopt an Asian teen while living in South Korea and bring her back to the states. Sung-min.

I loved that girl, but there was something always missing inside her, and I finally realized it stemmed from the fact that I knew nothing of what it was like to be an underprivileged Korean teen uprooted from her homeland to live with strangers in the U.S.

It didn’t feel right for me to take on that responsibility. I blew up the book and started over. Poor Sung-min, I still think about her.

My novel is about a tech entrepreneur who escapes the mendacity of Silicon Valley  for Asia in one last attempt to build something great.

Initially, I had large portions of the book set in the Bay Area. But then the more I wrote the less I wanted to be in the Bay Area—the place fills my stomach with knots—and, slowly, those large portions became smaller, and then smaller, until there was only one last tiny little Silicon Valley scene left. And it’s a doozy.

A: I want to leave people thinking about their connections. With people, with machines, how tenuous they are. How easily they can break.

You miscommunicate something to someone you love, or they interpret what you are saying wrong, as if you were speaking Greek and she was speaking Chinese, and someone is hurt. You hang up on your sister, and don’t speak to her for a year.

Displacement has always been a strong theme in my novels. Whether in search of escape, love, meaning, or redemption, my characters tend to cross seas to find it.

To lose oneself in another language, culture, and geography, is to open oneself up to not only great possibility but great vulnerability, and, as the writer Goethe said, it is difficult to walk away from that experience unaltered.

And while my new book also carries this theme of crossing borders, I’ve taken displacement to a deeper lever, from dislocation to a place called virtualization: “That which makes real what is not.”

A physical connection is now virtual. If I want to connect with another human, I no longer walk or ride the subway to their apartment, I open my laptop and click on Zoom.

If I want to network for job purposes, I don’t go to a cocktail reception, I turn on my social media app and enter a virtual chat room. “That which makes real what is not.” I am an emulation of the physical version of myself.

Our relationships with humans are growing ubiquitous with our relationship with technology. This is not a sci-fi movie, this is real life, and I wanted to leave the reader feeling altered by that, transported even though they haven’t left their bedroom.

Also, if you’re not aware of this yet, you should be, the coders are the people out there building our futures. Running the world. White males, the majority of them, and if we don’t get women to start coding, the world is *&#@-ed.

A: I’ve gone back to Italy, the setting of my second novel, to write, not a sequel necessarily, but some kind of second version of it.

The characters are older, the female protagonist more mature in her relations with her husband’s Italian family, whose heritage is more like the tentacles of an octopus tangling and unfurling. She no longer sees the Italians as stereotypes. They are part of her now, real and complex and beautiful and sad.

But this is not what the story is about. There is no time for that age-old stuff about culture assimilation, if it’s possible or not, the stuff that been written about since the beginning of time.

There’s no time because something happens while the woman is visiting her mother-in-law. Something unrelated to any of their ever-present miscommunications.

An elderly woman shows up at the door. She lives in the villa up the hill spending her days comatose in an easy chair, incapacitated and under the care of her ever more reclusive husband, so the town whispers go. No one sees her anymore. Until this very moment when she knocks frantically on the mother-in-law’s door, not looking so comatose at all.

This is based on something that happened when I was visiting my mother’s recently, and I’ve transplanted the concept to Italy.

A predominant theme is how we care for our elderly. But Italy has an entirely different relationship with their elderly than we do here in the States, so I’m not sure the blood transfusion will take. If I’ll have to blow up the book and start over. But I’m excited to find out.

A: I’ve probably said too much already. But I will say one thing, for all that nonsense about me not wanting things to end well in the books I read or write, I’m a big old sap for Ted Lasso.