Brittany Geragotelis is the author of The Infamous Frankie Lorde: Going Wild, a new middle grade novel for kids. It's a sequel to her novel Stealing Greenwich. She lives in Los Angeles.

Q: This is the second in your series featuring your character Frankie. What inspired you to create her, and do you think she's changed from one book to the next?

A: I really liked the idea of exploring the adventures of a modern-day Robin Hood—but with a girl behind it all. Over and over we've seen men as the cunning con artist, but I feel like when you put a girl in charge things would get so much more interesting. I'm all about the strong female leads and Frankie is that, for sure.

Frankie's changed so much from book one to two. One was all about learning that she could trust people other than her dad. She's also like every other kid her age and is at a point in her young life where she's redefining herself and what's important to her.

She's not willing to give up her old life completely but is evolving and that's where she decides to change her focus to helping others—just in her own special, Frankie way.

In book two, she's more comfortable in her new life but is starting to worry that she's given up too much of her old self. And she's trying to decide if that's a good thing or not.

Q: How did you come up with the plot for this second novel?

A: In each Infamous book, Frankie will be taking on a different crusade in the form of a current hot topic. The first was about a corrupt real estate mogul and a bit of the immigration issues (Hello, Mr. President). In the second, I wanted to see what Frankie would do if she took on the Greenwich version of Tiger King. And I wasn't disappointed.

Q: The book is set in Greenwich, Connecticut. How important is setting to you in your writing?

A: You know, I think it really depends on the book. This is the first one I've written where the setting is almost as important as the rest of the story. 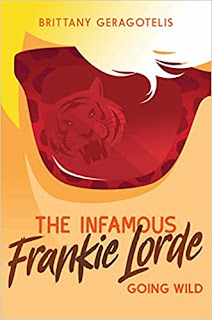 When I was searching for a place for Frankie to start the next chapter of her life, I knew I wanted it to be somewhere like Greenwich. Originally I'd thought maybe Westchester, N.Y., but when I started to do more in-depth research into these places, I found that Greenwich had the small-town feel I wanted, but in a very affluent package.

It also has a prominent Hispanic community and draws a bit of international travelers to it, which would allow me to showcase different cultures, ethnicities, and socio-economic classes.

A: I always generally know what will happen at the end of a book (I think that's why I've never had writer's block during a WIP), but the details that get me there change as the world forms in my mind.

Originally I had a Trojan horse-type scenario planned at the end, in order to get Frankie and the animals out of harm’s way, but eventually I realized it just didn't work. So, that got changed to something much more realistic and plausible. As plausible as a pre-teen robbing grown men and women and rescuing dangerous wild animals can be.

A: Ahhhh! So much! While I anxiously await the release of Going Wild, I'm beginning to work on the third book in the Frankie Lorde series and am developing a series based on the uber-popular kids podcast 6 Minutes with GenZ Media.

I'm also working with a production company on turning my first book series, Life's a Witch, into a TV show!

A: Just that Frankie Lorde is all about finding the things you think are worth fighting for and then being brave enough to do something about it.

Before I wrote the first book, I read up on the middle grade space and was so intrigued to find that this is the time in a kids' life where they start to tiptoe out of selfishness and begin to care about other causes outside of themselves.

I loved this so much because most kids haven't been hardened by the world around them just yet and they walk around with a sense that all things are possible. I love being able to help kids find the fight within and give them someone they can look up to.