Nicci French (the pen name for wife-and-husband writing team Nicci Gerrard and Sean French) is the author of the novel The Other Side of the Door. Their many other novels include House of Correction. They live in Suffolk, England.

Q: What inspired you to write The Other Side of the Door?

A: We imagined a young woman staring down at a dead body. At that moment we would tell two stories that would meet at the very end: how did we get here and what happens now? We imagined it as a kind of spiral or labyrinth (we always like to set ourselves different challenges in our books).

Also, we had the idea of telling a story about a group of friends and show the difficult dynamics of a group, how easy it is for people to misread each other and for things to go horribly wrong.

Q: How did you create your character Bonnie? Why did you decide to have her be a musician? 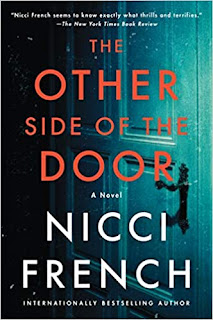 And since this was a story about a group of friends, it seemed interesting to make them musicians preparing for a concert because all the normal joys and problems of friends become heightened when you must perform together.

Q: The novel takes place in London during the summer. How important is this backdrop to the plot of the book?

A: When we have an idea for a story, once we have decided on the main characters, we have found the place and the time.

In a story about the problems of disposing of a body, central London felt perfect (in fact, the flat where the murder takes place is precisely based on the flat where one of our children went for music lessons).

And it had to be in the summer, when this group of young adults had time on their hands and were supposed to be having fun.

Q: The book deals with the issue of abuse--why did you decide to include that as part of the story?

A: This is a book about friendship at its best and worst. We really wanted to show how friendships can turn toxic. We teach our children not to talk to strangers but it’s a sad fact that most murders are committed by friends or relatives.

A: We’ve just finished a book called The Unheard. A 3-year-old girl shows her mother a drawing she has done. It seems to show she has witnessed a murder. But her mother can’t find any sign of a crime or a victim. What should she do?

A: We’re thinking of writing a Sean Gerrard novel. Whatever it is, it’ll be very different from Nicci French.