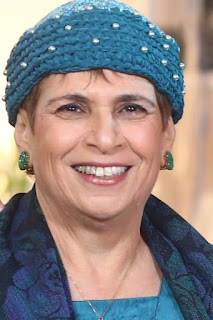 Susie Aziz Pam is the author of the historical novel Galilee Gold. She lives on a kibbutz near Jerusalem.

Q: The story you tell in Galilee Gold is based on historical events. How did you first learn about them, and what inspired you to write the novel?

A: My husband and I were hiking in the Galilee (the northern hills of Israel). We came upon this old Crusader fortress in Kibbutz Yechiam. And we decided to go up and take a look.

To make this old site "come alive," the Antiquities Department had put up metal figurines of Bedouin, donkeys, etc., to give you a picture of what went on at this fortress in the past. One of the figurines was a Bedouin sheik named Daher el-Omar who declared himself the king of the Galilee in the 18th century. He used this fortress as his military headquarters.

He built many sites in the Galilee, some of which are still standing today. He had a lot of wives, many sons, and he even killed one of his brothers for getting in his way. "What a cool guy!" What if I gave him a Jewish love interest? How would he handle that? And who would she be?

A: I didn't want the historical facts to slow down the action, so I tried to weave the important information into the plot. The more I discovered about el-Omar, the more the story fell into place. For example, he traded with pirates and had an army of mercenaries to help him conquer the Galilee. That fired up my imagination.

One of my characters was a healer - and I needed to find out about medicinal plants and herbal remedies. My daughter is a specialist in herbs and plants and their benefits, so she was able to give me the information I needed. 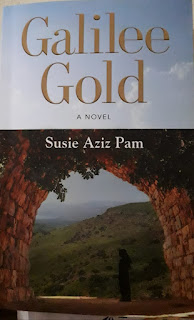 A: I did quite a bit of research using books and the internet, for example: how did they make soap in those days? We made another two trips to the Galilee ( I live on a kibbutz near Jerusalem ), so I could get more of a feel of the scenery and nature there. We found a tour guide whose expertise was Daher el-Omar, and he gave us an extensive tour of Nazareth.

The big surprise and the real reason I fell in love with Daher el-Omar was because he was the first ruler to invite Jews to come back and settle the Holy Land in over 1,200 years.

I discovered a book that included letters sent by him inviting Jews from Turkey and Syria to come and settle in the land of their forefathers. So that allowed the possibility of a Jewish heroine. The same book included letters written by rabbis in the 18th century praising el-Omar for his goodness towards the Jews.

A: I hope the readers enjoy the romantic adventure and the sparring that goes on between the king and Tamar. But just as important is that a Bedouin leader 300 years ago, had the foresight to encourage Jews, Arabs, and Christians to live together peacefully.

A: I have two projects on the back burner, both historical fiction. One is the story of how my family left Persia in the early 1920s and came to settle in Jerusalem. The main character is a compilation of my grandmother and several aunts, who had to raise their families in pre-state Palestine. Jerusalem was a very poor city then, so their husbands had to travel to India to make a living.

The second book takes place in England during World War II. It is about a little girl who moves with her family to Torquay, a resort town in southern England, to avoid the bombings in London.

The book I am currently working on, and the one most near completion, is about an American girl who comes to volunteer on a kibbutz in Israel. I am trying not to make it too autobiographical, while presenting the quirks and life in a traditional kibbutz.

A: I have Macular Degeneration, which makes it a challenge to read and write. When I write the first draft, I can make the font as large as I need, and then reduce it when I send it out. Galilee Gold is printed in Cambria in a larger font and with comfortable spacing between the lines. I have had a good response from both older and younger readers about that.