Q&A with Jasmine A. Stirling 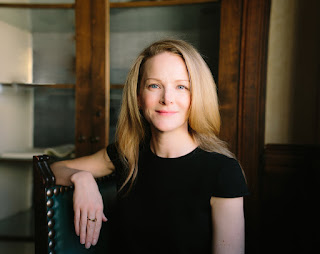 Jasmine A. Stirling is the author of the new children's picture book biography A Most Clever Girl: How Jane Austen Discovered Her Voice. She lives in San Francisco.

Q: Why did you decide to write this picture book biography of Jane Austen?

A: I set out to write a book that would challenge our notion of Austen as a prim, reserved spinster who lived a narrow life and demurely hid her writing when people walked into the room.

That idea of Austen was promoted by her immediate family and especially her nephew James Edward Austen-Leigh, who was primarily concerned with upholding the family's genteel reputation.

The real Jane Austen was a girl who loved to tell bawdy jokes and roll down the hill near the house with her brothers, who wrote shocking stories as an adolescent heavy with violence and vice, and who later sassily defied the Prince Regent's librarian when he asked her to write a real romance without any funny parts.

The real Austen is alive in three dimensions, and she's fascinating. Above all else, Jane Austen is a humorist. I thought that kids would connect with the real Jane Austen much better than the one that still haunts the popular imagination, and I hoped my picture book would help bridge that gap. 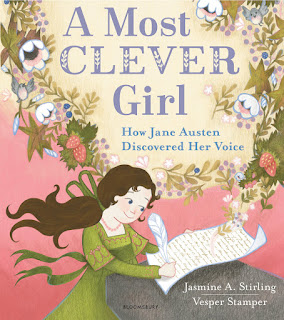 A: While researching the book, I read several Austen biographies, read Austen's letters and juvenilia, and read accounts of Austen's life written by her family. I investigated primary source material such as letters and diaries written by people who lived near Austen in Steventon.

I was again struck by the inaccurate lore that surrounds Austen, much of it generated during her own time. For example, there's a famous story that Austen fainted when she learned that her father would be moving the family from Steventon to Bath.

Upon closer investigation, it appears that this story was probably made up by a neighbor. It was after all, not that many years earlier that Austen had written "Run mad as often as you choose, but do not faint,” in her juvenile novel, Love and Friendship.

I was also dazzled to learn the importance of place in Austen's life and her writing. It turns out that the story of how Jane Austen discovered her voice as a writer is a perfect one to portray in a picture book, because her journey was so deeply rooted in something we can actually physically see—the places she lived, and how they did (or did not) nourish her creativity.

Q: What do you think accounts for the ongoing fascination with Jane Austen and her books?

A: Jane Austen is a genius and arguably the greatest novelist in the English language. Her stories remain relevant and fresh because her characters are so well-developed and because she is tender, funny and a master of realism.

There is also a wonderful global sisterhood of bright, well-read women who rally around Austen because she is both fun and feminist. What bookworm wouldn't want to escape into Austen's Regency world, where the smart heroine gets her own bookish version of a fairy-tale ending?

Q: What do you think Vesper Stamper's illustrations add to the book?

A: I love that Vesper visited the sites that she illustrated for the book in the UK. Her work emphasizes the three-dimensional portrait of Austen I worked hard to evoke in my writing. Vesper's Austen sparkles with mischief and wit. At the same time, her illustrations are gorgeous and lush and tap into that escapism that I think make Austen such a delight for grownups to read.

A: I have a YA book about Carrie Chapman Catt and the ratification of the 19th Amendment coming out in 2022 with Sterling Children's Publishing. It's titled We Demand an Equal Voice.

A: Please be sure to place your order for the book from the links on my website, then come back to my website and fill out the forms on the "Freebies" tab. I'll send you a free Jane Austen DIY Paper Doll Kit when you order, and enter you to win a gorgeous Regency Picnic Basket!

Also, I would love for your readers to request this book from their local library. Everyone who does so will receive a beautiful free Jane Austen watercolor quote print from me. Please see instructions here.