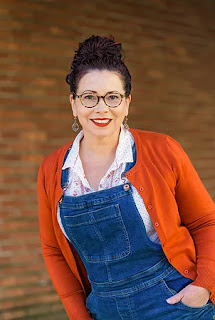 Donna Barba Higuera is the author of Lupe Wong Won't Dance, a middle grade novel for kids. She lives in Washington state.

Q: In a New York Times book review, Erin Entrada Kelly writes of your character Lupe, "Like any well-developed character, she is flawed but evolving, unique but universal." What do you think of that description?

A: I love it! It’s true. Lupe is a work in progress. She often says and does the wrong things.

We’re so quick to jump in and defend people, saying their intentions are good, or while misguided like Lupe, they are doing something for the right reasons.

But this isn’t even always the case with Lupe at first. She starts out a bit selfish. She doesn’t always consider the feelings of her friends.

This was intentional. I wanted readers to see her grow and become a better person. I wanted them to see that it’s okay to be flawed and sometimes wrong. What is more important is that we learn to forgive ourselves.

Kids need to know it’s okay to make mistakes, apologize and pick yourself back up. Then go do better. This is what Lupe does. In the end, she does the right thing for the right reasons, even though she has to make a huge sacrifice to do so. 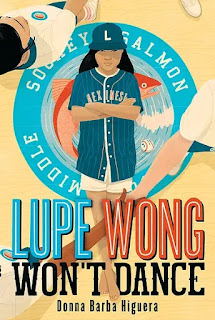 A: No. This novel took so many twists and turns. Much was rewritten as I conducted research for the book.

I learned along the way about many of the racist lyrics written for tunes used in square dancing. I’d never even heard of this before writing this book. This made me question how the book should end. It involved a major, but necessary revision.

Without giving spoilers, I’m still happy with how the book ends and how Lupe ultimately views square dancing and how she should approach her causes going forward.

People also think this means Lupe has to end up hating square dancing. That may or may not happen. I’m not telling.

A: The book’s title was originally Do Si Don’t Even! A suggested change was made by my editor to Lupe Wong Won’t Dance.

The publisher didn’t necessarily want a reference to square dancing in the title, as they didn’t want readers to think that was a book strictly about square dancing, which of course it isn’t.

But I do think the spirit of the title remained the same. It’s a book about a character who doesn’t want to do something. Lupe doesn’t want to do a lot of things. But most of her objections are because she feels powerless to change aspects of her life she finds unfair or unjust.

She’s told what length of shorts she has to wear. She’s told she has to mark one bubble or the other for race. These are things I often felt.

But ultimately the spirit of Lupe resisting something still remains in the title.

I have a picture book, El Cucuy is Scared, Too!, which releases with Abrams Kids July 13 of this year.

It’s a story about a little boy, Ramón, who is nervous for his first day at a new school and can’t sleep. And El Cucuy is the monster who lives in Ramón’s cactus pot. He can’t sleep, either.

It turns out that El Cucuy is scared, too!

This story explores the worries that can accompany moving to a new place and beginning a new journey—and reveals how comfort, bravery, and strength can be found through even the most unexpected of friendships.

Relocating to a new planet after Halley’s comet destroys Earth, 13-year-old Petra’s downloadable intelligence fails during the 370-year journey. When all adults are purged, and the other children reprogrammed, Petra’s defective pellet makes her alone the hidden bringer of Earth’s now forbidden stories and her grandmother’s Mexican folklore to a changing humanity.

I am so grateful to be able to write such different stories.

A: More good news coming very soon! But nothing I can speak about just yet. I promise to keep you posted.