Syl Sobel and Jay Rosenstein are the authors of the new book Boxed Out of the NBA: Remembering the Eastern Professional Basketball League. They grew up in Scranton, Pennsylvania, and now both live in the Washington, D.C., area.

Q: The two of you have been interested in the Eastern League since you were kids – what first intrigued you about it, and at what point did you decide to write this book?

A: We grew up together in Scranton and have been friends since kindergarten. Our dads first took us to Eastern League games at the Scranton Catholic Youth Center when we were 7 years old, back in the early 1960s, to watch the Scranton Miners play.

We immediately became huge fans. We were fascinated by the game, the players, the crowds, the energy. After the games we’d even get a chance to see and meet with some of the players. The Miners had a huge following in Scranton, especially with boys.

One of our favorite stories in the book is about how Jay’s parents made the mistake of scheduling Jay’s brother Bruce’s 1964 Bar Mitzvah party on the same night as a Scranton Miners home game against the Camden Bullets.

Well, Jay’s brother put up a fuss and threatened to leave the party to go to the game, which was possible because the CYC was only one block away from where the party was to be held. Thank God, Jay’s parents solved the problem by agreeing to let Bruce, Jay, and their friends listen to the game on a pocket transistor radio.

These great players, coaches, and refs – many no longer with us, others in their 70s, 80s and 90s – needed to have their stories told. We’re happy to be doing that.

A: We did a lot of interviews – almost 40 former Eastern League players, owners, referees, and fans.

We found former players in a number of ways – Google searches, social media, college and pro sports information offices for former players who had gone on to become coaches or to play in the NBA.

Some former players kept in touch with former teammates and they shared contact information. The former owner of the Scranton team is a friend of Jay’s family and he shared a lot of telephone numbers with us.

And early on we posted about our project on the Eastern League fan Facebook page and asked people to share stories, photos, mementos, etc., and several members of that group shared contact information with us. 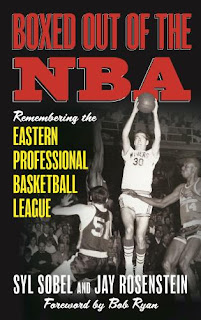 And, of course, we scoured the internet for everything we could find about the Eastern League, including newspaper and magazine articles, Wikipedia, articles and statistical tables prepared by basketball researchers. We even did some microfiche research at the library in Hazleton, Pa., where we found articles about the league’s founding in 1946.

Along the way we came across a few surprises, of course, like learning that in the early years of the league there were so many professional and semi-pro basketball leagues popping up that some cities had more than one team, and some players used to play in several different leagues, sometimes using assumed names.

But the best surprise – or should we say realization – was, in our conversations with many of the players who we idolized as kids, we found out that not only were they great players in their day, but they were great people.

Many of them became teachers and coaches who made a difference. Tom Hemans was the head of the New York City public school athletic league. “Big” Bill Green became a school principal noted for turning around troubled high schools.

Tony Upson became a secondary school principal and mentor to other principals. Howie Landa and Rich Cornwall became coaches and ran one of the first basketball camps in the country for girls. John Chaney, Jim Boeheim, Bob Weiss, Ray Scott, Hubie Brown . . . the list just goes on and on.

It was such a pleasure to get to know what successful lives these men went on to lead after they stopped playing.

Q: How did this league compare to other leagues of the time, and what do you see as its legacy today?

A: The Eastern League was formed in early 1946, amidst a boom of professional and semipro leagues popping up to capitalize on the large number of young men back from the war and the public’s desire for entertainment.

A few years later the ABL folded, leaving two main professional leagues in the country – the NBA nationwide and the weekend-only Eastern League located mostly in small Pennsylvania cities and considered second best to the NBA.

While the NBA was the top league in the world, from the early 1950s to the end of the 1966/67 season, the Eastern League had its glory years.

Moreover, for most of that time the NBA had only 10 or fewer teams and around 100 players total, compared to 30 teams and 450 NBA players today. So the Eastern League was the next-best alternative for a lot of great players who couldn’t squeeze into the NBA.

Some worked their way up to the NBA – like Bob Love, Bob Weiss, and Fred Crawford – while other former NBA players came down to the Eastern League to finish their pro careers, including greats like K.C. Jones and Paul Arizin.

Starting in the 67/68 season, the new, nationwide American Basketball Association (ABA) took many of the best players away from the Eastern League. It was the beginning of the end for the league. For the players who stayed and new players coming in, the Eastern League remained tough and competitive, but it was not the same.

As for the legacy of the Eastern League, it could be remembered for several things.

It took the three-point shot (created by Abe Saperstein’s American Basketball League in 1961) from a rarely used scoring option to a necessity for winning games.

The league, thanks in part to its many black players in the 1950s and early ‘60s, played a creative, up-tempo style of basketball that thrilled the fans – something the NBA, ABA and major colleges finally adopted in the late ‘60s.

And the Eastern League gave small, predominantly white communities a chance to see and meet African Americans, up close and personal, and break down social barriers.

One player recalled a night when he and several other black teammates entered an empty bar and were at first refused service, but then grudgingly served drinks. Eventually, however, the bartender realized they were professional basketball players from the local team, and started talking with them and giving them free drinks.

As customers entered the bar, he introduced them, and the fans bought the players drinks. By the time the night was over, the bartender, players, and fans were all friends and the bartender invited them to come back to his bar after every game, which they did.

Q: Can you say more about the role race played in the league?

A: Professional basketball was essentially a segregated sport when the Eastern League was formed in 1946. Though some African American players had played in the NBL during World War II and into 1946, none were in the BAA before it merged with the NBL in 1949 to form the NBA.

It wasn’t until 1950 that the NBA allowed its first black players – three in total, with a fourth joining the league after the season started. Through the 1950s and into the early 1960s, most players and observers from that time say the NBA had an unwritten “quota” on African American players (starting with no more than one per team, then two, then three).

The Eastern League, meanwhile, had three black players, all on the Hazleton team, in its first season in 1946-47, and two in each of its next two seasons.

In 1953, when a number of players implicated in the 1951 college gambling scandal – several of whom were black – entered the league, the doors opened for top African American players to become Eastern Leaguers.

The Hazleton Hawks had the first all-black starting lineup in 1956, while the NBA didn’t have one until 1964 (Boston Celtics). By 1960, when the NBA was still only about 20 percent black, the Eastern League was probably around 50-50.

The NBA’s quotas brought a lot of talented players to the Eastern League and elevated both the league’s level of competition and its stature in basketball circles.

Greats like Hal “King” Lear, Wally Choice, Dick Gaines, John Chaney, Tom Hemans, and Julius McCoy had little or no chance to play in the NBA, so spent almost their entire professional careers in the Eastern League.

During the summer these players competed against NBA players in the summer leagues like the Rucker League in New York and the Baker League in Philadelphia and held their own.

Black players from that era acknowledged that while the fans in the league’s small, blue-collar towns were generally supportive, the players did encounter off-court issues of racism.

One player recalled being turned away from a prospective apartment with the admonition: “We don’t rent to coloreds,” and players had problems getting served at some restaurants and finding anything but menial jobs if they decided to live in the towns where they played.

Nonetheless, as the story above about the ballplayers and the local bartender illustrates and as several players observed to us, the league did help to open doors and break down barriers in these small cities.

A: At this point, we’re mostly working on launching this book. We’re also exploring the possibility of turning it into a documentary. We think these players have a great story to tell, one that’s in danger of being lost in the history of professional basketball.

At a time when only 100 or so players could make it into the NBA, the men who played in the Eastern League were some of the top basketball players in the world. Yet few people have heard about them. We think it’s time they get their due recognition.

A: Yes. When we were kids growing up watching the Eastern League, we admired and even idolized these players. They were professional athletes and we were getting to see them up close in basically a high school gym, the Scranton Catholic Youth Center. So we have very powerful memories of the players and the games we watched.

And as we talked with fans from other towns and followed the Facebook page for Eastern League fans, we realized that our experience was not unique.

The Facebook page has over 1,000 members, and many of them posted memories similar to ours in their home cities like Allentown, Sunbury, Wilmington, Wilkes-Barre, and Trenton, and expressed the same kind of strong connection to the league.

So it was really cool to learn that many of the players felt the same way. Many of them told us how much they loved playing in the league and the energy they got from the fans in the small towns. Some players used to stay at the homes of fans, so they could save the few bucks a night it cost for a motel.

So there was a bond between the players and fans that could only have happened in these small towns and to players who weren’t jaded by playing in the “big leagues” and in large arenas where they didn’t have that kind of close connection with the fans.

In a way, the book is a love story between players who savored the opportunity they had to continue playing professionally and to fans who appreciated the opportunity to see great players up close. We hope that comes across in the story.