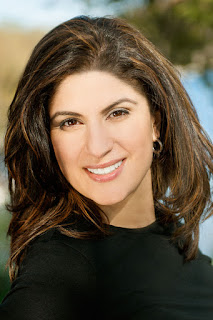 Nadia Hashimi is the author of the new novel Sparks Like Stars. Her other books include A House Without Windows. Also a physician, she lives in Maryland.

Q: How did you come up with the idea for Sparks Like Stars, and for your character Sitara/Aryana?

A: Much in my stories is inspired by newspaper articles. In 2009, Carlotta Gall (New York Times), wrote about a former army officer who revealed where, 30 years earlier, he had helped bury the bodies of Afghanistan’s first president and his family members.

The victims had been killed during the April 1978 military coup, an event that resulted from Cold War tensions coming to a head in an otherwise peaceful Kabul.

Universities were open to men and women. Foreign service officers from a host of countries considered Kabul to be a party post. Wide-eyed hippies were trekking across the country, taking in the scenery and enjoying Afghan hospitality.

I wanted to explore how such a dark and pivotal event could occur against such an idyllic backdrop. (Side note - I have my research rabbit holes linked through my website so if you want to see the pictures that inspired this or other stories, visit nadiahashimibooks.com.)

The youngest body found in the unmarked grave belonged to an 18-month-old grandchild of President Daoud Khan. This made me wonder what it would have been like to have been a child in the palace during a coup. What if a child had witnessed and survived that brutal night?

Sitara’s story is the story of Afghanistan. Her world is rocked that night but doesn’t end there. Her past is part of her psyche and haunts her no matter how far she goes. She represents a generation of Afghans, many of whom escaped a besieged homeland and resurrected themselves in America. 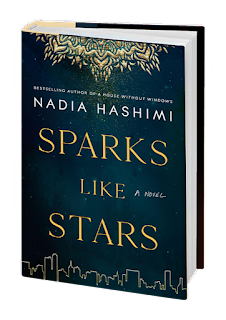 A: I knew this novel would begin in Kabul, April of 1978 and follow Sitara into adulthood. I did not have a map of Sitara’s logistical path from Afghanistan to the United States.

Side note - if this was a challenge to write, I can only imagine what it was like for those who have had to plan an escape from a volatile and violent Afghanistan with their small children in tow. Many members of my own family, including my husband, have done this over the years.

I had an idea of where I wanted the story to end but didn’t know exactly how I would get there. I couldn’t be sure of the decisions my characters would make until I’d gotten a few chapters in. Writing is a journey and when things are going well, the story unfolds organically. When a scene is written, the next begins to reveal itself.

A: Here’s where I confess a writerly weakness. I can compose 300-page novels but struggle when it comes to choosing a handful of words that make for a moving title.

Thankfully, my multi-talented agent (Helen Heller) has a knack for naming stories. She’s titled most of my books and, until now, each had come from a line of classic Sufi poetry (Rumi or Hafez).

For this story, I really wanted to include the poetry of a woman in this book so you can imagine my delight when Helen called to suggest Sparks Like Stars, a line that comes from the poetry of Nadia Anjuman.

Anjuman was a published poet from Herat, Afghanistan, who was tragically murdered by her husband. In “The Night’s Poetry”, she wrote:

there is no need for my crying / Sparks pour from my sighs like stars.

I could imagine Sitara/Aryana in this line, her tortured persistence. This story is as much about survivorship as it is about Afghanistan’s history. I love the image of those sparks appearing like stars against a night sky. This gives me hope that the story creates a path from hurt to hope, from loss to light.

Q: Did you need to do much research to write this book, and if so, did you learn anything that especially surprised you?

A: Some of the most surprising research came from the archives of the Association for Diplomatic Studies and Training (ADST), an organization that catalogs decades worth of  interviews with foreign service officers stationed around the world.

I also interviewed a foreign service officer, Louise Taylor, who had served in Kabul at the time of the coup.

I spent hours reading transcripts of diplomats stationed in Afghanistan. They described parties with foreign service officers from China, Russia, and European countries. The night before the coup, the American Embassy had hosted members of the Soviet Embassy in a Soviet-American Friendship Night.

I was most intrigued to read about the Americans organizing five sold-out performances of the musical Oklahoma!. Even the marines stationed at the embassy were involved. That image is such a stark contrast to the experience of Americans who served in the embassy at any point after April of 1978.

A: I’m now working on my first young adult novel -- one that explores the Afghan American experience. I’ve written for adults and middle grade readers so it’s exciting to shift perspectives.

It’s too early to talk much about the story but I will say that stepping into the shoes of a teenager is an exercise in humility. Teens today are navigating a world in a world that moves quickly and loudly. And while so much has changed and yet there are some timeless struggles - identity, confidence, friendships.

It’s a work in (slow) progress given that, like so many other families, my four children have been doing school from home since March 2020.

A: I love joining book clubs! The conversations keep me inspired and thinking. Sparks Like Stars was a story I felt compelled to tell because in book club discussions around my other stories, I’ve often been asked what happened to tilt Afghanistan into decades of conflict.

I hope that this pulls the curtain back on a turbulent and intriguing time in Afghanistan’s history and gives book clubs and individual readers something to talk about.