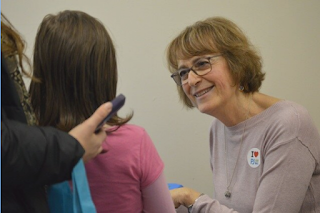 Kathy Kacer is the author of Call Across the Sea, a new middle grade novel for kids. It's the fourth in her Heroes Quartet series, which includes Louder Than Words. She lives in Toronto.

Q: How did you learn about Henny Sinding, and why did you decide  to write a novel based on her life?

A: I was looking for a fourth "hero" in the Heroes Quartet series. I knew I wanted to write about a woman. That would even things out; the first two books about male rescuers, and the last two about female rescuers.

I was reading the stories of many women who had rescued Jews and came across Henny's story. It just stood out for me - a young woman who had sailed Jews to safety across the channel from Denmark to Sweden.

Q: As you noted, this is the fourth in your Heroes Quartet series. What do you see as the relationship between Call Across the Sea and the other three novels?

A: They are all stories of rescuers - those who saved Jews during the Second World War and the Holocaust. Some were famous (e.g. Bronislaw Huberman), and some were hardly known at all (e.g. Henny Sinding). 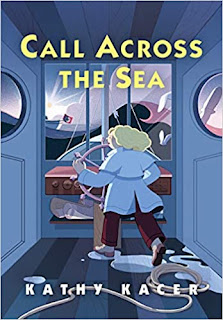 It was important to me to find a balance in the stories between those who were well-known and those were rather ordinary but demonstrated such remarkable courage.

I think that all those who saved Jews, including the four I write about in this series, are role models for young people today, showing what was possible during that terrible time in history.

Q: How did you research this novel, and how did you blend your historical research with the fictional aspects of the story?

A: Research is such an important and interesting part of the writing process for me - reading books, exploring websites, finding personal testimony, etc. Sometimes, I get so carried away by the research and the history that I forget it's time to write!

All the time that I was researching Henny Sinding, I kept notes that roughly plotted out the fictional aspects of the story I wanted to write. I asked myself things like "who will Henny rescue? Who might help her? What is her relationship like with her father? How else might she stand up for the rights of Jews?"

Then, when I was ready to write, I started combining the fictional aspects of the story with the real history.

Q: Can you say more about what you hope young readers will take away from the book?

A: As I said earlier, I hope readers will see the rescuers in all four of these books as heroic examples of what was possible in that terrible time in history.

There were certainly not enough rescuers like Henny Sinding - or the others. But each one of these brave people were willing to demonstrate moral courage by standing up for their Jewish friends and neighbours despite the dangers to themselves. I think that's pretty heroic and people like Henny should be celebrated by all!

A: I have a new book coming out in the fall called Under the Iron Bridge. It tells the story of a remarkable group of young German teens who were part of a resistance group called The Edelweiss Pirates.

They offered shelter to escaped prisoners from concentration camps. They made armed raids on military depots, stole explosives, and supplied them to resistance groups, and so much more. This is the story of a boy who is forced to join the Hitler youth but discovers the Edelweiss Pirates and becomes one of them.

I'm also working on a new book about a Jewish woman named Irene Danner who was a circus performer in Germany before the war. During the war, she and her mother were hidden in another circus by another remarkable rescuer, a man named Adolf Althoff. There are incredible stories that I discover nearly every day, and so many more that I want to write!

A: I'm so excited that my website www.kathykacer.com has been completely redone and is live and ready for you to visit! It's got lots of information for young people, for adults, and for educators.

Blurbs about all of my books are listed along with information on how to contact me for a school/library/book club/conference visit. Hope you have a chance to check it out!