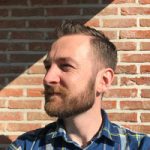 Paddy Donnelly is the author and illustrator of the new children's picture book The Vanishing Lake. He has illustrated many other children's books, and has created various iOS apps for kids. He grew up in Ireland and lives in Belgium.

Q: In The Vanishing Lake's Author's Note, you say there was a real vanishing lake near where you grew up. What inspired you to write the book?

A: Yes indeed! There's a real vanishing lake called Loughareema close to where I grew up in Ireland. It actually does disappear and reappear when it rains. Really magical.

I hadn't thought about it in a long time; however, when I was coming up with a list of picture book ideas, it popped into my head. As mythology and storytelling are a huge part of growing up in Ireland, I found inspiration to create a story around this magical place pretty easy.

Q: Did you work on the text first or the illustrations first, or both simultaneously?

A: I definitely sketched it out first. I knew the basic idea would be that the lake would disappear and reappear and a child would want to find out why. 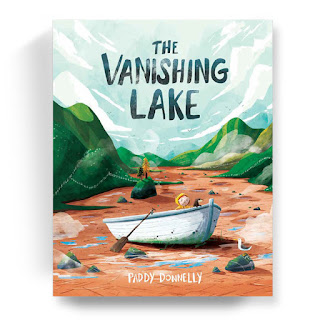 Then I had the Grandfather character come with a bigger and wilder story each time, so once I had those pieces I started to sketch everything out.

When I had the basic structure in place, then I could begin writing. Then it was a series of back-and-forth jumps between words and images as one would inspire the other.

A: I hope they take away a sense of wonder at the natural world and look at how amazing it can be. It can hold lots of secrets, but if the book were to inflame their imaginations a little, that'd be amazing.

Q: What got you interested in creating children's picture books?

A: My background is actually in web design. I worked as a UX Designer for many years and then gradually messed around with some illustration. I did a few illustrations for websites, and then I ended up making kids apps for the iPhone, which I really liked.

I think that's what eventually encouraged me to look into illustrating for picture books about three years ago and I've been loving it ever since!

A: A bunch of different picture books, all at various stages of completion, as well as a few middle grade covers.

The most exciting project at the moment, though. would have to be my second author illustrated picture book - Dodos Aren't Extinct, which is scheduled for Spring 2022.

A: You can usually spot a dodo in each of my books if you look closely enough.