Judy Batalion is the author of the new book The Light of Days: The Untold Story of Women Resistance Fighters in Hitler's Ghettos. The book is also available in a young readers' edition. She also has written the book White Walls. She lives in New York City.

Q: You note that you worked on The Light of Days for 12 years--what first captured your interest about these women, and what was your writing process like?

A: A while back, I was researching the topic of strong Jewish women at the British Library, and by chance came across the 1946 Women in the Ghettos, an unusual, dusty, 200-page book—in Yiddish. Even more unusual, I happen to speak Yiddish.

I opened it expecting mourning and gloom. But instead—guns, grenades, espionage. It was a Yiddish thriller, telling the story of Polish-Jewish “ghetto girls” who paid off Gestapo guards, hid revolvers in teddy bears, and helped build systems of underground bunkers.

They flirted with Nazis, bought them off with wine, whiskey, and pastry, and shot and killed them. They distributed underground bulletins, flung Molotov cocktails, bombed German train lines, organized soup kitchens, and were bearers of the truth about what was happening to the Jews.

I was stunned. Why had I — who’d grown up in a survivor family — never heard this side of the story? I knew I had found a treasure, and I needed to find out more.

And so began my quest. First, I spent several years on and off translating this original text into English and researching its background. Then I had to decide what to do with my findings, and ultimately decided to pitch a narrative nonfiction book.

After that, I began my intense, more-than-full-time work conducting research in Poland, Israel, England, and across North America; in archives and living rooms, memorial monuments and the animated streets of former ghettos.

I trawled through testimonies, photographs, obscure Hebrew documentaries, small press published accounts, museum displays, and the towns where these heroines were born and raised. 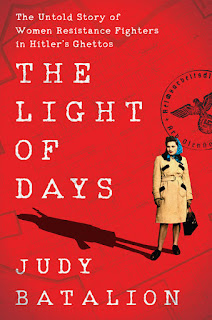 Finally, it took me about a year to write the first full draft of the book (which was nearly 800 pages!).

Q: You write, "Why, I kept asking myself, had I never heard these stories?" Why do you think the stories were not well known?

A: These women’s narratives were silenced for both political and personal reasons, which differed across countries and communities.

The history of the Jewish underground has generally been suppressed in favor of a “myth of passivity.”

Holocaust narratives were shaped by the need to build a new homeland (Israel), the fear of exposing wartime allegiances (Poland) and redefining identity (USA).

Early post-war interest in partisans turned into a 1970s focus on “everyday resilience.” A barrage of 1980s Holocaust publications flooded out earlier tales.

The fighter women who survived often kept their stories hidden. Many were treated with disbelief; others were accused by relatives of having fled to fight instead of staying to look after their parents; still others were charged with sleeping their way to safety.

Sometimes family members silenced them, as they feared that opening up old wounds would tear them apart.

Many of my characters hushed their tales due to an oppressive survivors’ guilt: they felt that compared to others, they’d “had it easy.” So often, when their vulnerable outpourings were not received with empathy, women turned inward and repressed their experiences.

Then, there was coping. Women felt a cosmic responsibility to mother the next generation of Jews. They wanted to create a normal life for their children, and for themselves. They did not want to be “professional survivors.”

Like so many refugees, they attempted to conceal their pasts and start afresh. Their formidable tales were buried with their traumas, but both stayed close to the surface, waiting to burst out.

Q: What did you learn in the course of your research that especially surprised you?

A: So, so many things surprised me. That was really the pleasure of writing this difficult book — I was constantly caught off guard. I called my husband nearly every day with a shocking fact or discovery, distracting him from many a meeting.

For one, the sheer numbers stunned me. Before working on this project, I’d heard of the Warsaw Ghetto Uprising.

But I had no idea that Jewish armed underground groups operated in more than 90 eastern European ghettos. “Small acts” and uprisings took place in Warsaw as well as in Bedzin, Vilna, Białystok, Krakow, and I could go on. 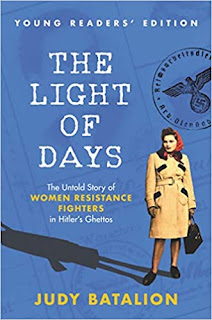 Jewish networks financially supported 12,000 fellow Jews-in-hiding in Warsaw alone. All this alongside endless examples of daily acts of defiance.

I was surprised — no, stunned — by these women’s missions: smuggling pistols, shooting Nazis, blowing up trains.

I was surprised by how relatable these women were, many of which were middle class, secular, literary types, not unlike me.

I was surprised by how many stories mentioned money — the resistance needed it for weapons, or companies and countries paid the Nazis for Jewish slaves or even to kill them. I had never before thought of the “economic” story of the Holocaust.

I was surprised to learn about the war from the Polish perspective, to read accounts of Catholic suffering too.

And though I’d been learning about the Holocaust since I was a child, I was still shocked by the sheer brutality of Nazi violence, the details of torture, rape and murder. In all these cases, it was the details that were remarkable; the details made the story feel human.

A: Right now, we are living through a cultural moment where women are harnessing their power. Witnessing social regression and an epidemic of harassment, fearing that our civil liberties, our constitutional backbone, and even the notion of authenticity are at stake, women are mounting large-scale social resistance efforts and political disruptions.

The young female activists of today spring from a hidden heritage of female bravado. The Light of Days tells this story, of women who saw the truth of their time, acknowledged it, worked together, and risked their lives in the fight for justice and liberty.

This tale of extraordinary female agency against all odds reminds us of the importance of recognizing the control we have over our inner selves. The ghetto girls took responsibility and action — even in the face of a seemingly impossible goal. Small victories are achievable!

A: I am so excited to be publishing a version of this story suited to 10- to 14-year-olds so they too can be inspired by this incredible hidden women’s history.