Joshilyn Jackson is the author of the new novel Mother May I. Her other novels include Never Have I Ever. She lives in Decatur, Georgia.

Q: How did you come up with the idea for Mother May I, and for your character Bree?

A: Bree started, I think, from my own Mom-Fears. Anyone who has ever had a kid in their care for more than five minutes knows that feeling. You look away for one minute! They can just squirt away.

But of course, for Bree, the kid has not just scooted under a bush after an interesting lizard. I was asking, what would I do? And the answer was, well, anything.

I have a lot in common with her, actually. We both live in Decatur, we have both been upwardly mobile, we are both moms, and I, too, was once a theatre major here in Georgia.

As for where the novel idea began...I could answer this a thousand ways; a novel is so big and stretchy that each of my books comes from a thousand places.

But it would be true to say that the book came out of my work with Reforming Arts, a small nonprofit that works in partnership with many institutions and organizations to bring higher education to incarcerated women.

Pre-Pandemic, I taught for seven years inside Georgia’s maximum security facility. I think it’s impossible to spend time in prisons without coming to realize that almost without exception, incarcerated people come out of extreme, ugly poverty, and have very few chances to escape it before they land in prison. 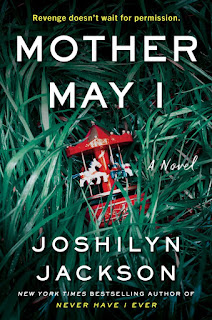 Q: What do you think the novel says about wealth and privilege?

A: We have a huge have/have not divide in this country. If you are middle class or wealthy, you get more chances.

Bree grew up barely clinging to the lowest rung of the solvent working class, but through scholarships and her marriage, she is now upper middle class, and her in-laws are wealthy.

The woman who takes her child had the same starting point, but where Bree got lucky breaks, her family had an opposite experience.

And the basic injustice at the heart of this---that the kinds of second and third and 50th chances Bree’s kids have do not exist for the kidnapper’s child---make me feel a little empathy for the kidnapper, in spite of everything.

I love that even Bree feels it. They become very close, in a weird awful way. But since each woman is fighting for her own child, there is no peace possible.

A: My brilliant agent! I really, really struggled with it.

I must have gone through 500 titles. I could never get one that felt right.

And then my agent just said it one day during a conference call, very off the cuff, as in, “What if it was something like Mother May I,” and my editor and I both yelled, “THAT IS IT!” It was like a serious “JINKS, you owe me a coke,” moment.

The idea of asking permission is there, and this book is, in some ways, about who gets permission, who gets second chances, who gets to decide. It’s also about family power dynamics, and motherhood, and these things are also present in the title.

I love that it is a game! I am a gamer. My last novel was Never Have I Ever, so hopefully this title will also help fans of that book find this one.

A: I think reading is a conversation between the reader’s worldview and lived experience and the book. I don’t really get to decide the take-away. I had my conversation with the book when I was writing.

I do hope the experience will raise questions that they want to talk over with friends or their book club. I want readers to think about economic privilege, and race, and gender, and how the world treats people differently in a million deeply ingrained ways that are crafty and invisible if they are not affecting you, and debilitating if they are, because it’s what I thought about while I was writing.

I also really do want people to strap in and enjoy the ride! While there is plenty for book clubs here, it is a thriller, after all.

A: Oh, another suspense. I am in love with writing them. It’s a white-knuckle domestic thriller in which a former sitcom star moves home to Georgia to flee an obsessive fan, only to find out that her stalker has followed her across the country. Or has he?

The threat to her and her daughter is more serious than she ever dreamed, and home is not the safe place she imagined...

Of course, it’s not that simple. It never is.

A: I read the audiobook version of Mother May I myself! I love that I get to do this. My theatre training has not gone to waste after all. I even read for other authors sometimes, like Lydia Netzer, Gin Phillips, Patti Callahan... I call it my side-gig. The past few years I have done it juuuuust enough to qualify for a SAG card, which tickles me to death.