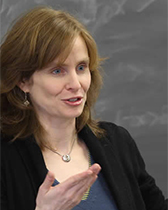 Kate Masur is the author of the new book Until Justice Be Done: America's First Civil Rights Movement, from the Revolution to Reconstruction. She also has written the book An Example for All the Land. She is an associate professor of history at Northwestern University.

A: The book began in some ways with the question of where Republicans of the Civil War era got their ideas about racial equality.

When I was finishing my first book, on Reconstruction in Washington, D.C., I wondered why Republican legislators were so quick not only to abolish slavery in the capital, but to repeal laws that discriminated against free Black people. I looked for answers in the antebellum North, where those legislators came from.

Q: In a New York Times review of the book, Jennifer Szalai writes, “If this is a cleareyed book, it’s still a heartening one. Masur takes care to show not only the limitations of what was achieved at each step but also how even the smallest step could lead to another.” What do you think of that description?

A: I loved that description. It really captured something important in the book and tension I felt when I was writing it— was it a pessimistic or an optimistic book?

The book is about the entrenched nature of racism, the extraordinary odds the first civil rights movement faced, and the violence that white northerners often inflicted on their Black neighbors.

On the other hand, there’s a lot in the book about the real changes this movement helped bring about, changes that were often incremental but sometimes – as in the case of the 1866 Civil Rights Act and the 14th Amendment – quite dramatic.

Q: You begin the book by describing a meeting of Ohio-based activists in 1843. What do you see as the significance of Ohio in this first civil rights movement?

A: Ohio was the first state carved from the Northwest Territory, and when it came to race and politics, it set the mold for other states. 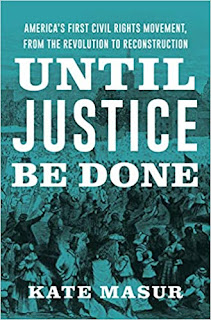 Ohio legislators, beginning in 1804, passed a series of explicitly racist laws, including requiring African American residents to register with officials, prohibiting them from testifying in court cases involving whites, and excluding them from public schools.

But Ohio also became home to the most effective antislavery movement in the Midwest, and that movement demanded repeal of the state’s anti-Black laws.

The more I learned about Ohio history, the more fascinated I became.

Q: You clearly did a great deal of research—how did it go?

A: When I first started, I was groping around, trying to figure out how to focus the book. Some of it was intuitive, and also I had some lucky finds.

For instance, there’s a lot in the book about protests over the arrest and incarceration of northern Black sailors whose work took them into southern ports.

I was unaware of this part of the story until I was in the Massachusetts State archives and found evidence of a very effective movement that pressed the state government and Congress to do more to protect those sailors.

A: The first civil rights movement accomplished a lot. It pushed the principle of racial equality before the law to the center of northern politics, ensuring that a cohort of Republican legislators stood ready, when the chance arose, to propose and pass the nation’s first federal civil rights measures: the Civil Rights Act of 1866 and the 14th amendment.

Yet white Americans found all kinds of ways to circumvent those policies, and the federal government did little to enforce them after the 1870s.

State and local governments that wanted to restrict and marginalize people, especially people of African descent, turned to vagrancy statutes and other policies that appeared racially neutral but were enforced in racially discriminatory ways. They also insisted that Jim Crow statutes that required racial segregation did not violate the 14th Amendment’s demand for “equality before the law.”

Civil rights activists of the 20th century took all that on. They did so in a different legal and political context from their antebellum predecessors, so the struggle looked different.

Yet 20th-century century activists shared goals that were similar to those of their 19th-century predecessors and of today’s movement for racial justice: they demanded equal treatment by law and law enforcement, respect for the freedom and dignity of all people, and a full-throated rejection of racism.

A: Right now I’m working on a graphic history of Reconstruction in the Washington, D.C., area. (Someone else is doing the illustrations!)

I’m also collaborating with a team of students and staff at Northwestern University working on a web-based exhibit on African American life in antebellum Illinois. It’s We anticipate that the exhibit will become part of the Colored Conventions Project based at Penn State University.