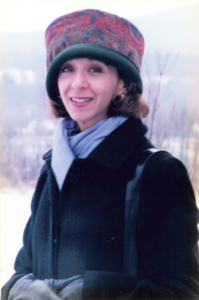 Marguerite Feitlowitz is the translator of the newly published book Small Bibles for Bad Times: Selected Poems and Prose, by the French writer Liliane Atlan (1932-2011). Feitlowitz is the author of the book A Lexicon of Terror, and she teaches at Bennington College.

Q: How did you first encounter Liliane Atlan, and at what point did you start translating her work?

A: I was introduced to Atlan’s work through sheer happenstance in the early 1980s.

I was working at TheaterCommunicationsGroup, when the eminent scholar Elinor Fuchs walked into our office and asked my boss if he knew of a French translator for an anthology of international Holocaust drama, and he said, “You’re looking at her,” pointing to me.

Let me say right here, that, while my French is near native, I was only in my mid-20s, working my first professional job, and had not yet published a book. So, in addition to serendipity, there might have been a touch of madness here as well!

The boss in question was Jim Leverett (who for many years after that taught Dramaturgy at Yale School of Drama). My translation of Small Bibles is dedicated to Jim.

I began working almost immediately, on Monsieur Fugue, the play Elinor had chosen for her anthology. Atlan’s best-known play, its 1967 production at the Festival d’Avignon. catapulted her to international recognition.

Elinor in turn introduced me to Bettina Knapp, a major scholar of 20th-century French literature and an expert on Atlan’s writing and life. I worked on Mister Fugue very closely with Bettina, who then asked me to translate two other full-length plays (The Messiahs and The Carriage of Flames and Voices) for a collection of Atlan’s theatre writing.

That book, with Bettina’s extensive introductory essay, came out at just about the same time (1985) as Fuchs’s anthology, the first of its kind, with plays from Czech, French, German, Hebrew, and Polish. Published in the mid-1980s, that anthology is still in print and going strong. And Liliane’s plays, in my translation, have had productions.

I had the great privilege and joy to work directly with Liliane on the translation of her plays. In fact, she took the occasion of these translations to revise her originals.

As I worked in my apartment in Brooklyn, she was in Paris mailing me xeroxes of the texts published by Gallimard with her cross-outs and re-writings. It was thrilling! 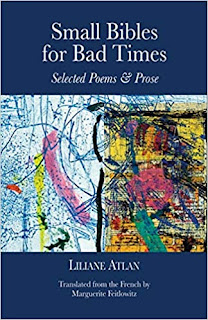 We first spent time together in New York City where, on our very first evening, Liliane demanded that I take her to CBGB, the famous punk-rock club in the East Village. Which, of course, I did (though I didn’t have the nerve to confess that my usual musical outings were to classical concerts).

Q: How did you become involved with this project, and how was its title chosen?

A: While increasingly my work became centered in Argentina and Chile, I never completely lost sight of Atlan.

As soon as I read her beautiful final book of poems, Peuples d’argile, forêts d’étoiles, I knew I wanted to translate it, and secured the rights to do so. Every poem I sent out to journals was almost immediately accepted; because this book is quite brief, it became clear that a heftier “collected” volume would be the better way to go.

How interesting that you ask about the title. I wanted something that would adequately frame her entire body of work. Small Bibles for Bad Times (Petites Bibles pour les mauvais temps) is Liliane’s title for the prose memoir we include in this volume.

Q: How would you describe Atlan's work, and what do you see as her legacy today?

A: At her core, Atlan is first and foremost a poet, that’s her sensibility. There is lyricism in her plays; drama in her poems; hallucinatory images, music, and searing voices in everything she wrote.

She is a hard writer to categorize: She is a “Jewish writer;” though one who wrestles with tradition and dogma; she is a “Holocaust writer;” an originator of l’écriture feminine; she’s a pioneering theatre artist, integrating video, sound, and spatial technology as early as the 1970s.

Much of her work predates or embodies trauma theory; she has always explored sex and gender. Soon after the 1967 war, she was working collaboratively with Palestinian theatre artists in Israel.

Born in 1932, she spent the years of the Second World War in hiding, sheltered by a gentile family. Survival guilt is a major theme of her work; so too is memory. Her quest was to “find language to say the unsayable…to [find a way] to integrate within our conscience, without dying in the process, the shattering experience of Auschwitz.”

Liliane’s legacy is to have created a body of work that never shrinks from evil and complicity. It is very tough and often frightening work, but it is also visionary, mythic, and—especially toward the end of her life—almost miraculously tender.

Q: What do you hope readers take away from Small Bibles for Bad Times?

A: Reading is such a personal experience, I hesitate to say what others should “take away” from any given work, even one that I’ve translated. But I do hope that readers will gain a sense of a Liliane’s extraordinarily rich life of the mind and spirit, her moral rigor, and disarmingly beautiful language.

I also hope that readers will feast their eyes on Mindy Weisel’s gorgeous painting on the cover; and appreciate the book’s elegant design.

A: Thanks to a National Endowment for the Arts Translation Fellowship, I am translating two books by Chilean poet Ennio Moltedo, written during or soon after the Pinochet dictatorship. In common with Liliane Atlan, Moltedo wrote prose poems in which the political, the lyric, and the surreal combine to startling effect.

A: Liliane’s children, who have long lived in Israel, maintain an excellent website:

I’m the author of A Lexicon of Terror: Argentina and the Legacies of Torture, and have translated the works of Griselda Gambaro, Luisa Valenzuela, Salvador Novo, among other Latin American writers.

I teach Literature and Literary Translation at Bennington College, in Vermont, where I’m the Founding Director of Bennington Translates, a multi-disciplinary curricular initiative that spans humanitarian, literary, arts, and scholarly translation with a special focus on conflict zones, forced migration, and displacement.