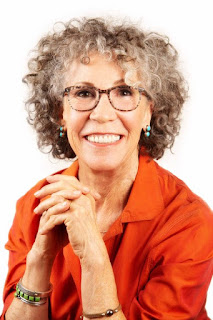 Christina Erteszek is the author of the new family memoir The First Lady of Underfashions. It tells the story of her parents, who fled from Europe to the United States and started the Olga undergarments company. She lives in the foothills of the Rocky Mountains.

A: My book was initiated upon a promise I made to my dying father. After both my parents had passed and I began tackling my father’s wish, I spent many years interviewing several candidates to take on his book.

After all, it was my father’s book, Jan and Olga’s story, and I was but an intimate apparel designer whose only published works were a few selected poems I wrote in my 20s.

At some point during my search, a writer friend of mine said to me rather empathically, “Christina, you cannot write your father’s book. You can only write your book, because your parents’ story is your story. Only you can write this book.” And so that’s what I did. 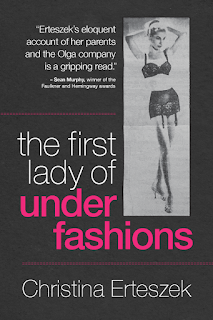 Q: How much did you know growing up about your family history, and how much research did you need to do to write the book?

A: I knew little of my family history and what I knew was romanticized or veiled.

It’s a complicated topic but let me say this: as young Poland immigrants, the goal of my parents was to be accepted in their newfound country. To be part and parcel of what my father called the American Experiment: that anyone could succeed no matter where they came from as long as they had the ambition and work ethic to endure–something unheard of from the country they fled.

For my parents, it wasn’t about blending in; that wasn’t an option as my father walked with a distinctive limp and Olga towered regally over him. This American Experiment rather entitled one the freedom to dream and create a new life, if not a new identity in a melting pot of abundant opportunity.

Throughout my youth, an event regarding our family history would unfurl like an unannounced stranger entering the house. These eruptions are what informed me regarding where I came from, if only unconsciously.

Being the youngest of three daughters, I had the privilege to spend endless hours with my father on car trips and sojourns which entitled me to his wisdom and passions. He would share stories of his past with me, though censored in a way that would only to come light decades later.

Once I seriously began the process of working on the book, I dug into the writings of my parents, travelled to their homeland and was given access to archival material.

Regarding the history of the Olga Company, I had a particularly intimate–no pun intended–relationship with the growth of the business, working for the company for over a decade during the company’s most noteworthy successes.

A: Hmm, that’s a tricky one. The easiest answer is I can now check it off my bucket list! The book has taken up a huge chunk of the last third of my life’s thoughts and working hours. During that time I became extremely self-absorbed and myopic at times as I navigated through my family saga. The book became most of me and now that it’s completed, I feel an enormous sense of liberation.

Also, this process of writing this book morphed me from a fashion designer into a writer. Now people ask me questions about what I wrote rather than what’s the best bra for their wife to wear.

Q: What do you hope readers take away from your family's story?

A: My hope is my readers will be entertained as well as informed. My parents’ life stories and contributions have so much to offer on many levels: their life’s travails and their accomplishments and how such bigger-than-life characters can impact others, for better or worse. How human and vulnerable we all are.

A: I’m presently working on a novel based on true events. It’s is about  the reclamation of a family’s 15th century property confiscated by the Nazis during World War II.

A: How grateful I am.

If you are interested in learning more about The First Lady of Underfashions, including selected book excerpts, upcoming events, and order options, please go to my website: www.christinaerteszek.com.

Please join for my first live Zoom event at Maria’s Bookstore on April 27, at 6:30 pm MST.