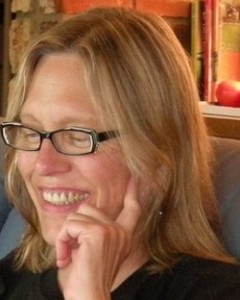 Chella Courington is the author of the novella Adele and Tom: The Portrait of a Marriage. Her other books include the poetry collection In Their Own Way. She lives in Santa Barbara, California.

Q: How did you come up with the idea for Adele and Tom?

A: Ten years ago a writer friend introduced me to Ben Lerner’s Leaving The Atocha Station, which covers a part of Lerner’s life, almost a transcript of his daily affairs. The content, close to autobiography, is called auto-fiction as writers take fictive freedom with their actual detail.

In her essay “Modern Fiction,” Virginia Woolf says that a novelist should look within and write about the complexities and subtleties of being a human being. Indeed, an engaging novel or shorter novella can focus on the often unrecorded, smaller events like dinner at home or discussing a novel.

In light of my respect and love for Woolf’s novels Mrs. Dalloway and To the Lighthouse, I began to think my day-to-day existence with my husband deserved closer examination. I decided to tell a story of two married writers navigating their journey together, loosely based on our lives yet with much narrative license. 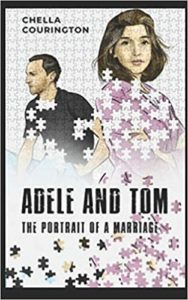 Q: How would you describe the relationship between the two characters, and what do you think the book says about marriage?

A: Adele and Tom have a complicated relationship as do most partners. Both independent and creative, careful of space and time, they try to focus on their writing and marriage while maintaining different professional lives.

Job, writing, relationship—that’s a lot to negotiate. Unless Adele and Tom are cautious, they may wind up sacrificing their love for each other to their writing. In the throes of living, we often neglect and take for granted those closest to us without whom we would feel exceedingly lonely.

Tom strikes me as more secure in his person than Adele. But his security and her doubts may be an illusion. Having grown up in a stereotypically ‘50s-defined heterosexual home where the woman was the caretaker and the man was the hunter-gatherer, Adele and Tom rebel against the conventional roles of developing domestic art.

Tom is the cook and the cleaner, the one who often puts his passions aside for Adele. He is quiet, shows little of his emotional turmoil while Adele assumes a certain liberty to express whatever disturbs her, rarely hiding her fears. She often appears the center of concern, in both her interior and exterior life.

For me, Adele and Tom show how difficult and rewarding marriage can be. The shine and newness have worn off. They know each other’s stories and when and how these narratives are prompted in public.

But together in private, folding clothes or reading side by side, they still travel to those deeper places we often avoid, like loss and death, the diminishing of our existence.

But they are survivors, having faced ulcerative colitis and breast cancer, and still take immense joy in their sensuality, enjoying each other’s touch and voice, though different from the rowdy excursions of their youth. They are empaths who know that time is limited and try to live accordingly.

Q: Why did you decide to write a novella? What do you like about the form?

A: As an undergrad, I fell in love with Herman Melville’s novella Billy Budd—the protagonist’s innocence, the way his path changes drastically in a moment’s mishap. Honestly, I don’t know what charmed me more—Billy Budd the character or that I could read his story in a morning.

While I was intrigued by Moby Dick and its complex exploration of good and evil, I had to work to finish the novel, waylaid by chapters on whaling. With Billy Budd, however, I was drawn to the faster-flowing narrative.

Then as a teacher of literature, composition, and creative writing at the local college, I found the shorter form easier to enter and exit as a writer with a never-dwindling pile of student essays. It gave me enough space to become immersed but not overwhelmed. A poet at heart, I’m equally interested in language and story.

A: There are several things I’d like readers to take away.

First, I hope the novella resonates in such a way that they think about what’s been said after the last page and want to reread sections, if not the entire work. The novella raises the questions of purpose, identity, loss and love that continue to touch us deeply as we grow older.

Second, I hope the everyday details are relatable. Yes, we all ponder the big issues, but we also attempt to enjoy what we experience in the moment. Whether making a pizza or visiting a pet store, we take pleasure in being alive.

Ideally, I’d like the language as well as the flashes of a relationship to transport the readers. Yet above all, I want them to find delight in Adele and Tom.

A: Recently I finished the first draft of a novel set in Alabama and South Carolina, states where I spent many of my early years.

Reminiscent of Woolf’s Mrs. Dalloway and Ian McEwan’s Saturday, the novel takes place in a day.

A: From her childhood Adele shows a deep attachment to words, mirroring my own feeling. Being able to read and write is necessary, I believe, for a fulfilling existence. When I look back, I know that reading and writing have helped me cope with sorrow while finding beauty.