Diane Zinna is the author of the novel The All-Night Sun. She lives in Fairfax, Virginia.

Q: How did you come up with the idea for The All-Night Sun?

A: The idea for the book actually came to me in a dream, though it evolved into something very different once I started writing.

I’d dreamed of two women friends traveling across Europe together by train. I dreamed that one of those women went down into an underground bathroom full of art, and in walked an ex-lover. And the protagonist has to decide whether to stay with the lover or get back on the train and continue her journey with her friend.

In the writing, the bathroom became Stockholm’s art-filled subway—maybe it always was? Though much has changed from that initial story concept, those who have read the book will know that the lover remained—he became Magnus. The friend, waiting upstairs, her jealousy seething, remained.

I had first set it in Paris because that’s where they were in my dream, but I had never been to Paris. As I started writing, the city bloomed into Stockholm, a city I loved, that I’d traveled to with a friend—my Siri. And once I started writing about Stockholm, I was able to tap into the grief feelings I experienced on that summer trip, years earlier, during Midsommar. 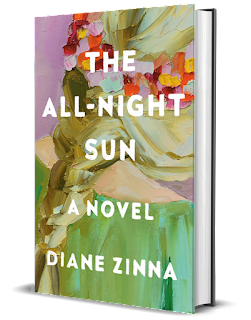 Q: How would you describe the relationship between your characters Lauren and Siri?

A: They bond so quickly over the intense losses they have suffered. They see parts of themselves in each other, even fearing some of what they see.

Whereas Lauren has closed herself off from the world, Siri has thrust herself out into it. In Siri, Lauren sees an 18-year-old version of herself that she might have been if she hadn’t been saddled with grief after the deaths of her parents.

She looks at Siri in the story and says to herself, I could have worn my hair that way, but it’s more that she’s admiring her artistic, wild, and carefree ways. I’ve always seen Siri as both a teenager and an old-soul, and really, they are both like that. Their being together is a constant rearrangement of those pieces.

A: I traveled through Sweden first during the summer of 2001, and then again in 2009 with a draft of the novel under my arm. When I went back, I revisited many of the towns I’d first experienced with “my Siri,” and my intention was to fill in all the blanks of my memory, to get every detail exactly right.

But what I realized was that I already had inside of me everything that mattered to the story, and it had come from that first immersive experience.

For example, after my friend told me about the Näcken creature of Swedish folklore, I followed threads to more stories, more creatures, more bizarre things, and I wanted to pack them all into the novel because of the way they had lit up my imagination.

But whenever I tried to incorporate those new stories, I found myself moving away from the center of my story. In storytelling, it’s so important that we don’t lead with research. We lead with story, with characters, with their feelings and passions.

As writers, we are naturally curious, we want to know so much—but too much research can be like quicksand and suck us in! The best we can hope is that the research we have done becomes part of our writerly unconscious, so that at just the right moment, just the right thing will leak out and add something special.

Q: The Publishers Weekly review of the book says, "Zinna’s intimate debut dazzles with original language, emotional sentience, and Swedish folklore as it plumbs the depths of grief, loss, and friendship." What do you think of that assessment, and what role do you see grief playing in the novel?

A: When it comes to language, I have always been what people might call an inventive writer, but this story was personal to me in ways that called on me to find a true-true-true way to tell it.

People often ask how much I’m like my main character of Lauren, and I tell people that whenever she speaks of grief, she is speaking in my voice.

I wanted to show a grief experience similar to what I experienced after losing both my parents as a young adult without any other family. Back then, people weren’t quite sure what to do with me. I wanted people to understand her by the end because for years I felt there was no one else in the world who could understand my situation or love me through it.

A: I worked on The All-Night Sun for 13 years, so there have been a lot of stories that have been lining up waiting for me.

I am simultaneously working on two books: a novel set in Korea, and a memoir about my cousin, who was born Deaf and lived on the streets of Portland, Oregon, for most of her life. I only met her after she was diagnosed with terminal cancer and she contacted me via Facebook to ask me to be her next of kin, but I flew out to be with her, and it’s the story of that complicated, lifechanging meeting.

A: I have been teaching a weekly grief writing class every Sunday for the past few months. Many have found their way to it after reading The All-Night Sun. Consider this an invitation—if you have a grief story to tell, come and write it with me. More information can be found on my website at www.dianezinna.com.