Anna Bálint and Phoebe Bosché are the editors, with Thomas Hubbard, of the anthology Take a Stand: Art Against Hate. Bálint is a poet, writer, teacher, and editor. Bosché is the managing editor of Raven Chronicles Press. They are both based in Seattle.

Q: How did the three of you come up with the idea for this book, and how did you work together on it?

Anna Bálint: The idea began to surface soon after the 2016 election, as the overall climate of hate in this country began rapidly heating up once Trump was in office—with attacks on Muslims, immigrants, environmental protections, healthcare, and more.

All of it in keeping with Trump’s presidential campaign around building the Wall, referring to Mexicans as criminals and rapists, the Access Hollywood Tape, and on and on.


But at the time Raven was already working on, or committed to, several different projects, so it wasn’t possible to explore the idea further until sometime in 2018, by which time the need was glaringly urgent.

So that’s when we really began to discuss what an anthology to take on hate (in all of its manifestations) might look like. Certain things were clear from the get-go.

For instance, that the climate of hate in this country did not begin with Trump, and would not end with him, and that an exclusively anti-Trump anthology would fall far short of what was needed.

There was general agreement among us (including the anthology editors and the Raven Chronicles board and contributing editors) that the roots of hate in this country can be traced back to its beginnings, meaning that the scope of the anthology needed to include and reflect U.S history based on the genocide of Native Americans and the enslavement of Africans—though what that might look like, how it might manifest itself in poetry and images wasn’t yet clear.

Another concern was that we not end up with a downer of a book, just full of testimonies of the manifestations of hate, suffering, fear—feeding feelings of despair about the impossibility of change. There needed to be some kind of balance between despair and hope; despair and resistance.

From that, we came up with a title that helped focus our intent: “Take a Stand, Art Against Hate.” Both a clear call and broad enough for a call for submissions. We felt that broadening our scope in this way would ultimately make the end result more inclusive. We needed to trust that there were poets, writers and artists with lived experience and imaginations who could Take a Stand.

Q: How did you choose the authors and the pieces to include?

AB: The majority of the work we chose came to us through open submissions, via Submittable.com, and we were flooded with work.

But we also reached out to several well-known/established/individual poets and writers—both directly and/or through their publishers—around specific previously published works that we were eager to include in the anthology. People like Lucille Clifton, Jericho Brown, Ilya Kaminsky, Dunya Mikhail, Danez Smith.

Additionally, we found a few wonderful pieces by browsing online, seeking out work that addressed specific themes such as the environment or missing and murdered indigenous women. That way, we came across some outstanding previously unpublished poems, two examples being Tanaya Winder’s Love Lessons in a Time of Settler Colonialism and Rajiv Mohabir’s Why the Whales Are Back in New York City. 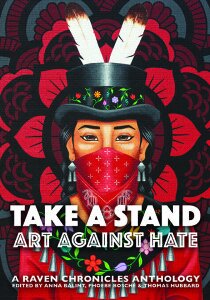 As to our overall selection process, there were several key factors we considered essential.

For example, that the anthology addressed a diversity of topics—the right to seek asylum, reproductive rights, access to affordable healthcare and housing, the right to vote, gun violence, Black Lives Matter and other mass movements, etc.

It was also important that the voices and images selected represented the diversity of this country in terms of race, ethnicity, gender/identity, age, and geography, and included both established and emerging writers/artists.

We were thrilled to be able to include writing from a high school student and a person in recovery from addiction and years of homelessness who was completely new to writing. Making sure to include humor was another important consideration.

Q: How did you organize and structure the book?

AB: We started with what we knew we didn’t want. None of that slotting/putting work and artists into various single identity boxes based on race, gender, religion, sexual preference, etc.

We knew we needed a structure with more elasticity than that. Something that allowed the work to breathe, and reflected the complexity and different ways that identity and experience overlap and intersect in the real world.

We also knew that somehow or other we needed to root the entire collection in the legacy and reality of this country’s colonial history. Also, that the collection as a whole needed to eventually arrive at hope—alongside both the necessity and real possibility for change.

Eventually we ended up with an anthology that contains poems, stories and images from 117 writers and 53 artists, divided into five fluid and intersecting sections: Legacies, We Are Here, Why?, Evidence, and Resistance.

We begin with Legacies because the current increased climate of hate in this country didn’t begin with the 2016 election, and to find its roots we must look to U.S. history. This is why Legacies begins where the U.S. began—with the genocide of Native Americans and enslavement of Africans.

From there, the section loosely winds its way through time to touch on crucial events and different chapters of our nation’s history down to the present.

Legacies then spills over into the second section We Are Here, where we see, really see, and hear from some of the most vulnerable, overlooked and stigmatized people in our society.

The Why? section is the place in the anthology that most grapples with the philosophical underpinnings of hate, including some pieces that call out to challenge both “white skin” and “first world” privilege.

The Evidence section provides testimony, lots of it, witness after witness to testify through poetry, story, and image about the many different manifestations of hate, from the pressures of living in a state of constant anxiety and fear, to unbreathable air and assaults on the environment.

All of which brings us to the fifth and final section, Resistance, where hope is discovered at every turn, embodied in dreams, and born of action, of protests and counter-protests, as well as other less obvious acts of resistance—such as caretaking, truth-seeking, and tenderness.

Phoebe Bosché: At this minute, we are working on several publishing projects. On May 10, 2021, we will republish/reissue a print version and first edition eBook version of Spirits of the Ordinary, A Tale of Casas Grandes, a novel by Kathleen Alcalá, one of our founding editors.

First published in 1997, the narrative is set in northern Mexico in the 1870s, and weaves the stories of women struggling against societal constraints, Mexican Jews practicing their religion in secret, and a gold prospector turned spiritual seeker in a spectacular desert landscape.

We are just beginning to put together our second anthology of work from The Raven Chronicles—a magazine of art, literature and the spoken word that we published from 1991-2018.

This second anthology, This Light Called Darkness, will highlight the work of 86 writers —work selected from issues we published between 1997-2005. It will be published in 2022.

Q: What do you see looking ahead when it comes to taking a stand against hate in this country?

PB: I/we think the legacies of hate, ignorance, and racism are still influencing every facet of life in this country. Trumpism has brought white nationalism (AGAIN, not for the first time) into the office of the president and into the halls of Congress, and has poisoned all public debate.

We, at Raven Chronicles Press, will continue to publish work that, in the words of our mission statement: “embodies the cultural diversity of writers and artists; work that expresses family and forebears; work that connects with the soil, water, and air of place and home.”

AB: Having a strong cover image was hugely important. We wanted an image that was hard to ignore. Something both beautiful and powerful. We also decided early on that we wanted the cover image to in some way address and honor the indigenous people of this continent, which in our view also meant the work of an indigenous artist.

Our search was long and hard. Not that we didn’t come across a couple of possibilities fairly early on, not through open submissions, but searching online and at regional art shows. But trying to make initial contact with an artist proved incredibly difficult and time-consuming, and was ultimately unsuccessful.

So here was the anthology, the layout and formatting near completion, and we still didn’t have a cover. Lots of great work, but just not right for the cover, and Phoebe, especially, was starting to get panicky.

That’s when I started searching on Google, until one night I stayed up real late looking for a cover image: determined not to quit until I found it! Then sometime in the wee hours—I did. Talk about an aha moment!

The power of the image was immediate. The strength and resiliency of the figure—an indigenous woman—and I knew right away that this was it. Had to be.

Because this was public art—painted on the side of a building in Duluth, MN, that housed a Native American community center—and because public art exists to be seen, to be widely available to the public. It was as if the image was meant to be our cover. And I guess it was.

PB: Besides producing books, Raven endeavors to reach as many readers and writers as possible, including especially those in underserved audiences and communities.

We do this by donating books/magazines and by conducting free readings and community events. Through these activities we seek to produce and disseminate literature and art which can make a difference in our lives and in the lives of future generations.