Maria Espinosa is the author of the new novel Suburban Souls. It focuses on Holocaust survivors in the San Francisco Bay Area during the 1970s. Her other books include the novel Longing. She is also a poet, translator, and teacher.

Q: How did you come up with the idea for Suburban Souls, and for the family you write about?

A: The story is based on  people I have known intimately, but each character is also a composite, composed of distinct individual qualities.

Q: What do you think the book says about the impact of trauma and how it’s passed down to later generations?

A: Trauma lodges in the very cells of the body. It is passed on through memories, both voiced and unvoiced, to immediate family members. I believe it embeds itself in chromosomes that affect future generations. 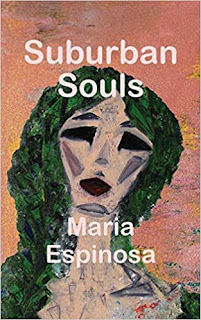 A: I had no idea when I first began that it would end as it finally did. I had envisioned a more fantastical ending, with the so-called psychic playing a pivotal part. But with each draft, characters and events changed. It went through numerous drafts. As it stands, each draft could have become an entirely different novel.

Q:  What do you hope readers take away from the story?

A: An enlarged sense of compassion and greater understanding of human beings. A greater awareness of how individuals affect each other, whether tangibly or intangibly.

A: I have so much that I want to write, and I don’t know if I will live long enough or have enough creative strength to do it all. I’ve written rough drafts of several novels. I’d also like to write a nonfiction account of homelessness in Albuquerque, which has been wrenching to observe in my own neighborhood.

Q: Anything else you should know?

A: I love to dance. I miss parties and social life during this pandemic!! At the same time, I’d like to go on a solitary meditation retreat.