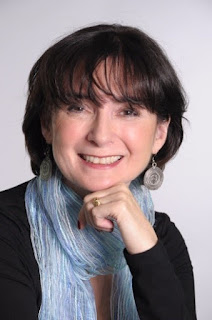 Janet Stilson is the author of the new novel The Juice. A journalist, she lives in New York City.

Q: How did you come up with the idea for The Juice, and for your character Jarat Ellington?

A: The initial inspiration for Jarat came to me when I was at a cocktail party at the Museum of Natural History in New York. I believe it was a Discovery Channel celebration tied to one of its new programs. And I was there in my role as a journalist.

We were in the Rose Center, where models of planets are displayed. A young man emerged who seemed out of place in that particular social milieu. Mostly, people involved in the TV network business are fairly conservative dressers. But this guy had much longer, scragglier hair than anyone there, and he was carrying an elegant cane. He was of our “world,” but he wasn’t.

I had a sense that he was someone who probably went to a very good school and was from a wealthy family but was an outlier. He seemed like the sort of guy who would go up to a catered bar displaying so-so wine and convince the bartender to give him a glass of the really good stuff, hidden away for the big shots.

We didn’t speak. I don’t know who he was. But I fell in love with the sense of him. 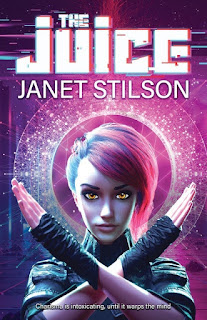 The whole novel was inspired more broadly by my work as a journalist, covering the business of media and advertising.  My job involved talking with a lot of executives at major media companies about what they are planning to do.

All of this was fertile ground for me as I imagined what it would be like to work inside large media companies a few decades into the future – and what they might create to amuse us; to get us to buy certain products, or believe certain “truths.”

A: Oh my goodness. Sooo many changes. This novel was something that evolved over several years. I like to joke that it was like swimming across the ocean. This is my first novel, and so I was learning the craft of novel writing at the same time I was harnessing a huge number of ideas for characters and storylines. It took me time to see the best structure, and the best ending.

Q: The Publishers Weekly review of the book says, "Stilson creates a chilling world: the government brainwashes its citizens through subliminal messaging, and ubiquitous security cameras eliminate the concept of privacy." How did you create the world in which the book takes place?

A: It all goes back to my work covering media companies, watching as new tech innovations have emerged and creative content has evolved. I observed how certain governments around the world imposed restrictions on the information that people received, and how news is slanted by some media outlets to fit the narrative of powerful people.

And, of course, there are huge discussions today about what personal information tech companies can access and use. Subliminal messaging has been around for decades, and curbs have been placed on it. But it’s there as a possible tool.

So out of all that came some fun and scary “what if” scenarios. Like, what if people could program their mobiles to give them artificial dreams at night? What if those “dreamisodes” were served up by big media companies that embed certain messages in the storylines?

And what if there was a secret substance, called The Juice, that could transform mildly charming people into god-like presences, who had enough charisma to make anyone do just about anything?

A: I hope that that it provokes new thoughts about the future of media and advertising. But at the same time, I hope people are thoroughly entertained. There’s a fair bit of humor, romance, and an espionage roller-coaster ride winding through the story. So this isn’t an “eat your spinach,” “learn about media” kind of tome.

A: I’m writing a TV series pilot that’s also set in the future, with some fantasy mixed in. As with The Juice, it has to do with revealing deeply buried truths that are quite vital to the characters at the heart of the tale.

A: That I’m deeply grateful for this interview, Deborah! Thank you for inviting me to share the underpinnings of a world that’s deeply meaningful for me – and which was a great deal of fun to explore.