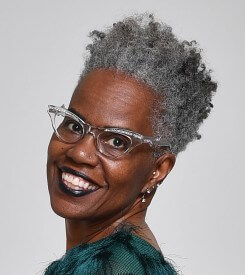 Tricia Elam Walker is the author of the children's picture book Nana Akua Goes to School. A writer, attorney, and educator, she is an assistant professor of creative writing at Howard University. She lives in Takoma Park, Maryland.

Q: What inspired you to write Nana Akua Goes to School?

I have a cousin who became a renowned children’s book illustrator. One day she said, "I have some collages—see if you can write a story to go along with them." Her artwork is beautiful.

We had a program at Howard, where I teach, about publicity. I talked to an agent and she found a publisher! My cousin had a lot on the burner, so they said, "Why don’t you do a separate book?" I was surprised. That wasn’t the intention.

I had a deadline—I would think of things and send them to my agent, and she said no. I was close to the deadline, and I was at a friend’s house who had African masks. I had an idea of a little girl with African markings on her face, and then realized [the character would be from] an older generation. 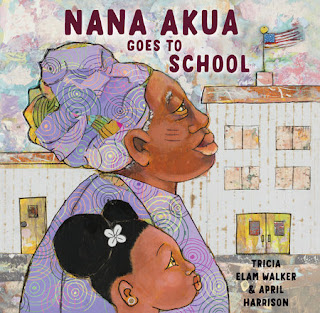 Q: So was it your cousin who illustrated the book?

A: No, they found an illustrator, April Harrison. I've had a print of April’s for years, and I realized her work was something I’d loved.

My cousin is Ekua Holmes. Our book, Dream Street, will be out in June.

Q: What did April Harrison’s illustrations add to the book?

A: She breathed life into the characters who had been living in my head. They don’t like it when the illustrator and the writer work together, but they let us have a conversation.

A: I didn’t know a lot. I have friends from Ghana, and the first thing was to talk to them and learn about tribal markings. I wasn’t really surprised, but I was excited to learn there was a deep meaning to them.

How to convey that to children? The idea of Adinkra symbols, worn by kings and queens. Now they’re on t-shirts, all kinds of things. One of the symbols was used in the Black Panther movie by the costume designer. Kids have been drawn to them, and tried to create them.

Q: The Kirkus review of the book called it “A wonderful springboard for cross-cultural understanding conveyed through deeply symbolic art.” What do you hope kids take away from the book?

That’s it’s important to care about other people. The idea that Zura wants to protect her grandmother is important--we forget children have that kind of feeling--but not to let that stop you.

Appreciating differences. I’m glad April portrayed a diverse classroom. There’s the little boy with a Hispanic background and his grandfather. That people are different should be celebrated, not ridiculed.

The importance of family and respecting older people. Her grandmother lives with her and is her favorite person—that’s important to me.

Q: Can you say more about Dream Street?

A: We started out with the collages. The idea was that it would involve a street called Dream Street where the people all have different dreams. A lot are children, and there are also older people who have dreams. There’s the importance of having dreams, realizing them no matter how long it takes, and a celebration of family.

Q: Anything else we should know about Nana Akua Goes to School?

A: Doing a children’s book takes a village. You have the illustrator. My editor is very hands-on. People will say it’s easier than writing a novel, but it wasn’t. In a small space, you’re trying to teach something in a way that’s enjoyable and engaging and illustratable.