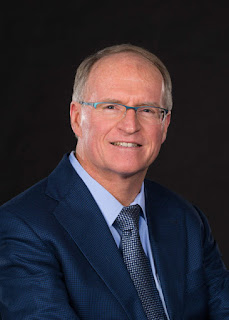 Kenneth M. Price is the author of the new book Whitman in Washington: Becoming the National Poet in the Federal City. He is the Hillegass University Professor of American Literature and co-director of the Walt Whitman Archive at the University of Nebraska-Lincoln.

Q: Why did you decide to focus on Walt Whitman's years in Washington, D.C.?

A: Whitman aspired to be the national poet, so Washington, D.C., had special resonance for him. Whitman sought to make himself and his country interchangeable, as it were, and he often embodies some of the highest aspirations of American life and its most glaring and persistent shortcomings.

His long effort to associate his career with the war and American democracy reached a high point in his majestic elegy to Lincoln, "When Lilacs Last in the Dooryard Bloom'd."

Even as we celebrate Whitman's accomplishments, we need to consider his failures, too.

In Washington, his life and literary career were interwoven with larger political and cultural forces. The years when Whitman was in Washington, 1863-1873, were pivotal in his life and in that of the city and nation.

These years saw the culminating battles of the Civil War and the Union victory, Lincoln's assassination, and the onset of the hugely important Reconstruction period.

The period also speaks to our own moment because of the racial dimension—D.C. underwent rapid and profound change, and Whitman was an uneasy inhabitant, observer, and commentator as a multiracial democracy was first glimpsed.

Q: Can you say more about the impact you think this period had on Whitman's life, and on his poetry?

A: Whitman's work in the Civil War hospitals was life-changing both for him and for many of the soldiers he visited. He was moved by the frightened, lonely, and suffering men.

He greatly admired the dignity and stoicism of common soldiers, and he understood that sympathy, attentiveness, and love could help these soldiers more than the often disastrous medical interventions of the time. Several wounded men credited him with saving their lives. 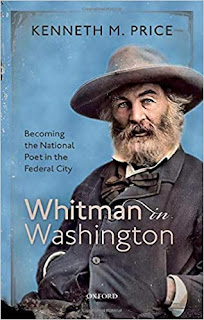 D. Willard Bliss, who oversaw Armory Square Hospital, where the worst cases were treated, testified that no one achieved more in the hospitals and for the government than Whitman. The poet worked in the Civil War hospitals with such zeal that he called himself a "missionary to the wounded."

Whitman's work in the hospitals, risking his own health and sacrificing an enormous amount of time at the height of his literary career, was a humanitarian achievement of the first importance. He felt that his experience in the Civil War hospitals vindicated his stress on the importance of male-male comradeship and love.

In order to sustain himself personally, and to make possible small gifts to the soldiers—a piece of fruit, candy, tobacco, stationery, and so forth—Whitman sought work in Washington.

The government was growing rapidly during the Civil War, enabling him to find his first truly stable job as a salaried clerk. In an era before typewriters and word processors, he served as a scribe, copying letters in a fair hand (and perhaps at times co-authoring them). Overall, he found the work far more pleasant than he expected, and he enjoyed most of his colleagues.

There were frustrations, too, of course. He had a notable run-in with a moralistic government official, James Harlan, Secretary of the Interior. Harlan thought Leaves of Grass was obscene, and he fired Whitman from his post in the Bureau of Indian Affairs. Fortunately, friends came to his aid, and he was quickly hired in the office of the Attorney General (later to become part of the Department of Justice).

The Harlan firing provoked William Douglas O'Connor to write The Good Gray Poet, a passionate defense of Whitman and one that would shape his reputation for the rest of his life.

Whitman combined various roles—professional, poetic, and private—in these years. His service as a scribe links, if it does not fully unite, his roles during this time: he drafted letters home for soldiers, drafted correspondence for lawyers and politicians in governmental offices, and drafted poetry that speaks in a multitude of voices.

He became something of a ventriloquist—throwing his voice to become soldiers as he wrote through them to their friends and loved ones, just as he assumed the identity of others as he worked as a government scribe.

These Washington experiences of taking on another’s view—always part of Whitman’s poetry, of course, but now acted out quite literally in life—accelerated his developing tendency to write from the perspective of various personae.

These personae, especially notable in the latter part of his career, are more thoroughgoing and more sustained alterations of identity than the rapid but typically brief shape-changing of the speaker in the 1855 poem eventually titled "Song of Myself." We see such sustained personae in a variety of poems shaped by his Washington years, including "Ethiopia Saluting the Colors" and "Prayer of Columbus."

Q: What would you say are some of the most common perceptions and misperceptions about Whitman?

A: People think of him as a proto-hippie, a free spirit, certainly not a bureaucrat. But that is what he became in his role as a clerk, first in the Department of the Interior and later in the Attorney General's office. Prior to moving to Washington, he had often belittled clerks, seeing them as foppish and subservient.

In the Attorney General's office, Whitman inscribed at least 30 letters treating Ku Klux Klan outrages in the South, yet surprisingly he did not speak of the dangers of White supremacist groups and their guerilla warfare in his poetry, essays, and many conversations with Horace Traubel at the end of his life.

This failure to speak up—given what he knew and his power with language—is disheartening.

Whitman is famous as the poet of the body and sexuality, and he is also the poet of love in its many forms. Early in his career, he showed remarkable sympathy for the downtrodden.

He is also regularly viewed as the all-inclusive celebrant of diversity, a writer who lauded the U.S. as a "nation of nations," and he receives praise for broadening the range of what was treated in literature and particularly in poetry. He highlighted the loveliness in the ordinary and common.

Yet as he aged his sympathies altered, and his capacity for love seemed to wane. Regrettably, like many White northerners, he grew fatigued with the cause of African Americans, and he was willing to sacrifice racial justice for regional reconciliation.

Q: What do you think Whitman would make of today's Washington, D.C., and its politics?

Broadly speaking, though, we can be confident Whitman would be appalled by the widening wealth gap between an elite few and the vast majority of Americans. He might well be moved to write in the vein of "The Eighteenth Presidency!" his bitingly ironic critique of American politics in the lead-up to the Civil War. He would think we have lost our way.

He would be unsparing in his criticism of undemocratic efforts in the Republican party to throw away millions of votes in states that didn't go for Trump. He would be sickened by politics that have drifted into fantasy and are not grounded in facts and evidence but instead wild conspiracy theories. He would be horrified at the sight of the Confederate flag in the Capitol, a building he loved and revered as sacred.

Would he speak out loudly and eloquently against white supremacist paramilitary groups this time around? We don't know, of course. Those who love Whitman fervently hope he would, but, regrettably, his past avoidance of the issue can't leave us confident about it.

A: I'm just starting a book that considers what happens when we shift from print to digital representations of our literary heritage. I study the 19th century, and writers from the period are key in this change because their writings are free of copyright issues.

But how important has this change  been? Is it fair to think of it as a transformation?

For example, do we think about Emily Dickinson, Herman Melville, Frederick Douglass, or Walt Whitman in fundamentally different ways once their writings are available in electronic form? Do we have anything beyond mere increased searchability to better understand these writers? If so, how and why?

I will consider the problem of who we study, edit, invest in—those who become our cultural heritage. They are the writers taught in schools and whose literary papers are preserved. Does the digital era offer a way to promote a more diverse understanding of our past, or is it likely to reinforce current reputations and hierarchies?

I hope to give attention to important but somewhat less well known writers, too, such as Charles Chesnutt and Fanny Fern. In their lifetimes, their works were often distributed via newspapers and small-run periodicals. Will the massive efforts to digitize newspapers lead to new opportunities to understand in a richer way writers like Chesnutt and Fern?

Overall, I'm weighing the problem of what we save and revere and what we don't—in short, the problem of the archive. Or to put it another way: how can we make a usable past for the present?

A: If any of your readers wish to learn more about Whitman, they might also consult The Walt Whitman Archive. New discoveries about Whitman and his times are posted there with regularity.