Elaine Weiss is the author of the book The Woman's Hour: The Great Fight to Win the Vote. A journalist, her work has appeared in a variety of publications, including The Atlantic and Harper's. She lives in Baltimore.

Q: Why did you decide to write The Woman’s Hour?

A: The honest answer is because I knew nothing about [the history of women's suffrage]. I grew up with voting being modeled by my parents and my surroundings, being taught that it was very important to vote. I dedicated the book to my parents, who would take me as a child to the voting booth.

I had no idea how I got to vote, and I asked friends who also had no idea. If it came up, it was Susan B. Anthony, Elizabeth Cady Stanton, maybe Seneca Falls, and that was it. I realized there was a gap here, and it was a strange one when you realize how important this issue is.

I started looking at a woman benefactress [to the siffcause] who makes a cameo in the book. I was deep into my research about how her bequest was spent:

First, to finance a lobbying shop on Capitol Hill beginning in 1916 for a federal amendment.

Second, to start a public relations shop in New York that would pump out articles about women’s contributions in World War I, and would send them to newspapers every day.

Third, to start the League of Women Voters.

Fourth, to finance a ratification campaign.

Then it described what happened in the last state to ratify [Tennessee], and my eyes just popped out. My husband said it’s a great story, but is there enough for a book? I found there was. The women who went to Nashville for the fight show different messages and I could reach back to the beginning. 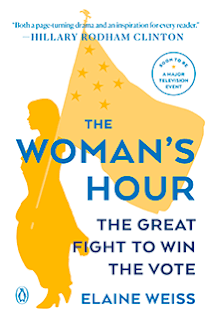 A: This [the anti-suffragists] was part of the story I had no idea about. I was shocked by it, and in hearing from readers, they didn’t expect that. It makes it even more pointed today. We can see the legacy.

I was reading the Nashville Tennessean and the Nashville Banner of that day and age. It was a railroad hub, and they announced the arrivals of the trains and if any celebrities had arrived. I realized all three [of the women I was writing about] arrived on the same night, and I thought, I’ve got it! I was fortunate in the narrative sense.

The idea of an organization of anti-suffrage women makes you think, This doesn’t make sense! But I wanted to make their reasoning clearer. I had to be careful. I didn’t want to make fun of them. They had to be worthy opponents; the suffragists were worried about them.

There were several types of anti-suffragists. Some were wealthy women. The status quo was working just fine for them. They didn’t feel their voices weren’t being heard. Some of them were so connected. Eleanor Roosevelt wasn’t an anti-suffragist, but she was certainly not a suffragist. She didn’t need to vote, she had Uncle Teddy in the White House.

Also, they didn’t want immigrant women to have the vote.

Some were racists, who didn’t want Black women or Chinese women to vote. You have to parse what anti-suffrage was. It wasn’t one size fits all.

[On the pro-suffrage side] I found it sad and fascinating that in Nashville, there were two strong suffrage organizations with their own headquarters, their own staff, their own strategy, and their own lobbying, all for the same goal.

Q: What about the role of race in the suffrage movement?

A: It was another part of the story I was not aware of. It’s a very important part of the suffrage movement from beginning to end. It comes out of the abolitionist movement.

When I realized Frederick Douglass was at Seneca Falls but Susan B. Anthony wasn’t—she wasn’t part of the movement yet—it was very profound for me to see the role he played. A lot of the divisions and setbacks had to do with race.

I tried to be fair about it, and point out the suffragists’ hypocrisy in certain instances. It broke my heart to see [suffrage leader] Carrie Catt’s hypocrisy in acquiescing to racist sentiments.

I tried to look at political reality. Sometimes it gets lost when we rightfully point out racist attitudes. They needed two-thirds of both houses of Congress and they needed Southern racist men to vote for the amendment. They were not going to do that by bringing Ida B. Wells to the chamber to lobby.

They needed three-fourths of the states, so they had to go back to the racist men in Southern legislatures. They tried to manage it. It is abhorrent but politically clever. This was a political action, not a moral action. I try to balance that, and talk about it in my formal talks.

A: I just handed in my proposal to my agent. It will in some ways continue the story on voting rights.

A: I’ve been active in talking about voting rights. Specifically, I’ve been invited to a lot of legal forums because the book won the top prize of the American Bar Association.

I made a vow, having been given a platform before a big election—I couldn’t be political in terms of the candidate, but I could be strident in terms of voting rights. I could look up each state where I was going, and see the voter suppression laws and it was horrifying, especially Tennessee.

I stood up there at the Nashville Rotary and said you can’t celebrate the centennial and Tennessee’s part in it while you’re allowing your representatives in the same state where you live, where the 19th amendment was ratified, to have terrible restrictive laws coming out. That’s hypocrisy.

I said it in Missouri, Ohio, wherever. I wanted them to realize that they’re ready for a parade and they can’t do that without realizing the connection that you’re slashing voting rights today. It’s important to bring the book’s themes into the present day.

--Interview with Deborah Kalb. Elaine Weiss will be participating in the Temple Sinai Authors' Roundtable on Saturday, Feb. 27.