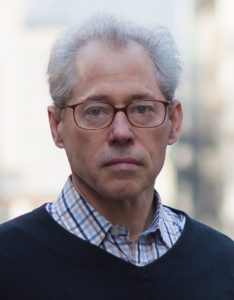 Paul Vidich is the author of the new novel The Mercenary. His other novels include An Honorable Man. He lives in New York.

Q: In your new novel, The Mercenary, you bring back your character George Mueller. Do you think he's changed since you first introduced him?

A: When we first meet George Mueller in An Honorable Man, he was young, and saw himself as an outsider on the inside of the CIA who wanted to return to teaching English literature.

Mueller is at the opposite end of his career in The Mercenary. In the new novel, Mueller is Moscow Chief of Station, nearing mandatory retirement age in the CIA.

Mueller stayed in the agency, rose in the ranks, and became a committed covert intelligence officer. He embraced the CIA’s mission to fight the Cold War against the Soviet Union. He set aside youthful doubts about the nature of his work – the lies, deceptions, and extrajudicial killing – and he embraced the agency’s mission.

He is older, more cynical, and more practical. Throughout the years, the job defined him and shaped him in ways he hadn’t expected.

Q: How did you come up with the plot for The Mercenary? 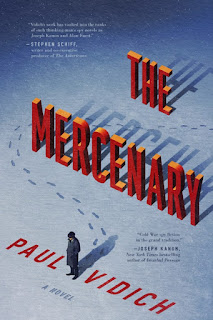 A: I was fascinated by the Soviet Union in the late 1980s. The Soviet Union had been a dangerous adversary of the U.S. during my youth, but it suddenly collapsed, like a consumptive, sick old man.

Moscow in the twilight of power struck me as a good setting for a Cold War novel – the moment when the Soviet Union’s illusion of dominance met the grim reality of a crumbling system.

It was at that time that several senior KGB officers fled to the West. I came across the case of Adolf Tolkachev, a senior radar specialist, who provided meaningful intelligence to the CIA and was arrested by the KGB before he could be exfiltrated from Moscow.

I was curious about his, and other defectors’, motives. Rarely did an American defect to the Soviet Union, but Russians often fled. I wanted to understand what drove them to leave country, home, and family.

A: I read numerous biographies and memoirs by KGB officers who defected. Among them were The Billion Dollar Spy by David Hoffman; Mole by William Hood; Tower of Secrets by Victor Sheymov; Next Stop Execution by Oleg Gordievsky. I was intrigued by these stories and the potential for drama and suspense. CIA officers in Moscow were under constant surveillance and any KGB officer caught attempting to defect faced certain execution. There was a lot at stake for these men and their families.

In addition to memoirs of KGB defectors, I read as much as I could to understand the Soviet Union in 1985. The Afghan War had been raging for several years and the Soviet occupation had become deeply unpopular and depleted the Soviet economy.

Serge Schmemann’s Echoes of a Native Land, a New York Times correspondent’s memoir of living in Moscow, provided a stark and moving account of the city in the 1980s that was infinitely suggestive. Details of the historical moment helped shaped the tone of the novel, and became background for several of the characters.

In my previous books, I visited the novel’s setting, but the pandemic prohibited on-site research for The Mercenary.

I discovered, however, that Google map’s street view allowed me to roam the city as if I were there. I was able see where the action of the novel took place, walk the streets my characters traveled from their hotel.

I was also able to look inside buildings and churches. Google street view allowed me to do “location scouting” from my home in Soho, NYC. Street names, traffic patterns, pedestrians’ clothing, and building facades all come alive via my computer screen.

Q: In an interview with MysteryTribune, you noted that John le Carré’s The Spy Who Came In from the Cold was "the first spy novel that gripped me." Given le Carré's recent death, what impact would you say his writing has had on your own?

A: In my view, le Carré was one of the most important novelists writing in English in the second half of the 20th century.

The Spy Who Came In from the Cold had a hypnotic effect on me when I read it in my 20s. Published in 1963, it captured the dark Cold War zeitgeist that followed the erection of the Berlin Wall in 1961.

It was a world so real, so true, so compelling that it stayed with me long after I closed the book’s covers. The grim story, its empathetic characters, the clever plot, and the masterful writing changed my way of looking at spy novels. I have read and reread the book to figure out how he pulled it off.

He has been an inspiration in another way as well. He died at age 89, after writing 25 novels over six decades, but nine of those novels were written after the age of 70. He remained a powerful voice when many of his contemporaries lost their muse.

A: My next novel is titled The Matchmaker. It is set in Berlin in 1989 just as the Berlin Wall falls. Berlin, even more than Moscow, was a hot bed of espionage in the last years of the Cold War.

The Matchmaker is a senior Stasi counterintelligence officer with close ties to the KGB. The CIA believe he can establish the truth about a KGB mole in the CIA, and they want to apprehend him before he disappears behind the Iron Curtain as East Germany collapses.

A: The Mercenary includes a reference to the television series The Americans, which features Soviet spies living illegally uncover in America as ordinary citizens. A college classmate was the show’s executive producer and he inspired one aspect of my protagonist’s backstory. You’ll have to read the novel to learn what it is.