Elayne Klasson is the author of the novel Love Is a Rebellious Bird. A psychologist, she has worked at San Jose State University. She lives near Santa Barbara, California. 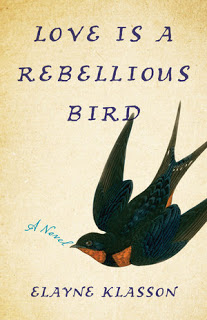 A: I did not know how it would end when I began writing. I love books that go longitudinally, following the characters, or family, through time and maturation. I knew that I wanted Judith and Elliot to mature and go on with their lives, but stay engaged and connected with each other.

I struggled to find an ending which was not sappy and sugary--yet not without joy and hope. I spent a great deal of time trying to find that ending: satisfying yet not soporific, for Judith and Elliot toward the end of their lives.

A: I did a bit of research for the legal career of Elliot. I researched how one becomes a clerk to a Supreme Court justice—where one typically went to law school and what one typically accomplishes to be in the running for this honor.

Originally, I’d placed Elliot at Columbia and had him living near the Columbia campus until I learned that a great preponderance of Supreme Court clerks from the 20th century went to Harvard Law. So, off Elliot and his then-wife went to Boston and Harvard.

I also have learned that people respond in very different ways to the relationship between Judith and Elliot—some readers have been annoyed, even angry, with Judith because she stays with Elliot despite the relative inequality in their relationship.

More and more, I am hoping that readers will not judge others for the choices they make in relationships. I remind readers that this is not a self-help book. I am not advocating that all women follow Judith’s path—this is a personal choice—one I probably would not make.

I watched the recent Hilary Clinton four-part documentary on Netflix. I was touched at how Secretary Clinton responded again to questions about why she stayed with Bill after the scandals with women.

She replied (and I loosely paraphrase) that she had never loved anyone as much as she loved Bill. She decided to not leave him. She seemed utterly sincere and I decided to stop judging her for her decision, as I hope readers will not judge Judith.

Q: Can you say more about how readers have responded to the novel?

A: I have been thrilled and surprised by the response. With my debut novel coming from a relatively small press, I did not know what to expect, fearing that my novel would be dropped into a deep, dark hole, never to see the light of day.

To my surprise, the book has been well received and sales respectable. For example, the day it hit Southern California’s Independent Book Seller’s Top Ten in Fiction, I was glowing and giddy beyond belief. I've won some amazing prizes I never expected.

But the response from readers at events has been the most heartwarming. I have loved going to book clubs and book events and hearing my characters, Judith and Elliot, being debated and discussed. They are real to me—and what a thrill to hear readers relate to them.

There have been some surprises—the biggest is how warmly the book has been accepted by the Jewish community. I wrote with what I suppose is considered a Jewish sensibility and voice—but I did not address specifically Jewish themes.

The question of who we chose to love is certainly not an exclusively Jewish question. But my greatest fans seem to come from the Jewish community. I asked my rabbi why she thought this was.

She replied that, besides the obvious answers of where the characters grew up and with what Jewish institutions they interacted, she thought the notion of compassion and caring was a theme of the book—and a Jewish theme.

I also have loved that people have related and told me their stories of their own particular “golden boy (or girl)". The novel has helped people remember that particular person in their past who was, as I put it in my novel, their “definition of what love is.”

I have been reworking this novel, finding the question still feels compelling to me.

Again, following an adoptive child over decades, I tell his story from three voices. I am revising the novel and hope to publish it in 2021 or 2022.

A: It is a thrill and surprise that I am publishing my debut novel at the age of 72! I have worked hard and always felt that when the work was good enough, it would be published. I feel excited and exhilarated to be talking about and touring with this novel and am treasuring the experience. As I said earlier, I feel every moment is precious and I don’t want to waste any of it.

--Interview with Deborah Kalb. Here’s a previous version of this Q&A. Elayne Klasson will be speaking virtually at the Bender JCC of Greater Washington on Feb. 9.