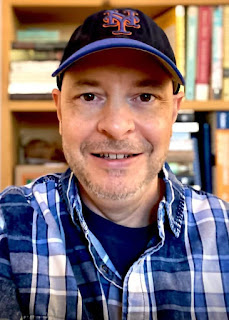 Peter Mercurio is the author of the new children's picture book Our Subway Baby. It tells the story of his own family. Also a graphic and website designer and playwright, he lives in New York City.

Q: You first wrote about your family in The New York Times and other publications. Why did you decide to write this children's picture book version of the story?

A: Shortly after the New York Times article ["We Found Our Son in the Subway"] came out in February 2013, Kate Harrison, an editor at Dial Books for Young Readers (an imprint of Penguin Random House), contacted me to ask if I had ever considered turning the story into a children’s picture book.

I had written a screenplay about our family story but had not considered writing a children’s picture book until after speaking with Kate. Although as soon as she suggested it, I was ready to go. I thought it would be a great way to share the story with kids and their parents, grandparents, or guardians.

Q: What do you think the book says about family? 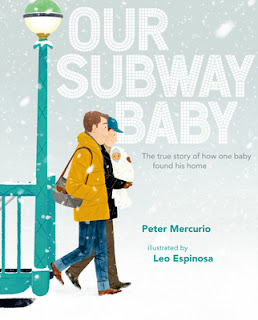 A: That families come in all shapes, sizes, and configurations. We used to share Kevin’s story a lot when he was little—with relatives, friends, coworkers, new acquaintances, and many of Kevin’s classmates—and we always said what made us a family was the love we shared for each other. It’s as simple as that: love makes a family.

Q: What do you think Leo Espinosa's illustrations add to the story?

A: I was so impressed and excited the first time I saw Leo's draft illustrations. Then, to see it all come together in color was breathtaking. It's not every day your family is depicted in a picture book.

Leo captured my family and the story so well. But more than that, he captured the magic of New York City. The city sidewalks, apartments, subway trains, and snowy avenues—through his illustrations—become characters in the book.

A: I really hope the main takeaway is the line that is repeated throughout the book, “where there is love, anything is possible.” For me, that’s the message.

A: As for writing, I’m reworking and finishing up a longer, memoir-like version of the story. I’m also a graphic and website designer, and lately, I’ve been focusing more on design projects than on writing.

That said, I’m always jotting down ideas in a notebook or app for essays, articles, plays, etc. So I suppose, in a way, I’m writing all the time even though it doesn’t always feel like it.

A: Where there is love, anything is possible. This is so true and is worth repeating.