Nathan Elias is the author of the new story collection The Reincarnations. His work has appeared in a variety of publications, including PANK and Entropy. He lives in Nashville.

A: I began writing the stories for The Reincarnations in 2014. Up until that point—from 2011 to 2014, respectively—most of my creative writing had been screenplays, with which I had some small successes.

However, I sporadically tried to write short stories. Usually they were not particularly good.

In 2014, after having left my hometown of Toledo, Ohio for Los Angeles in 2012, I tried my hand at short stories again. This time around, I felt I was striking a nerve.

Thus came “Right Now at This Very Moment”, which was the first piece of prose where I had found what I suppose would be my voice in fiction writing. It was truly the first authentic piece of fiction I had written. I kept trying to write stories whilst working on screenwriting for the better part of the next two years, but it never amounted to much.

In 2015 I started to gravitate toward the idea that perhaps I did not want to work on films and screenplays anymore, that I’d rather devote my energy to writing fiction. In 2016 I was accepted to the MFA program at Antioch University, and, with much studying and tutelage, I began making strides with my prose.

Many of the stories in The Reincarnations were composed while I was in the MFA program; one was written before, and two after. So, this collection took from 2014 to 2019 to complete. 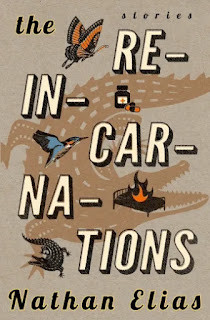 A: Arranging the order in which the stories appear was no easy task. In fact, I spent hours upon hours over several weeks—nay, months—considering the best (and only) order.

Some of the stories are lighter, some are darker. It was a balancing act to ensure that the reader doesn’t get bombarded with dark stories (not that the stories are depressing, but some certainly grapple with darker material than others) in one portion of the book.

Additionally, some—but not all—of the stories are connected, meaning they share a small cast of characters but are not necessarily related sequentially. It was important to stagger these stories throughout the collection so that they didn’t appear back-to-back; I wanted the reader to remember these characters, but not to think that it was a book about these characters (not a novel in stories, for example).

Additionally, many stories in the book deal with speculative elements whereas others do not. I wanted to alternate between the speculative stories and the more traditional stories so that the book would straddle genre norms.

The more I toyed with the arrangement of the stories, the clearer it became that there was only one true arrangement. It might have taken me a while to put this puzzle together, but the end result is a purposefully orchestrated symphony of characters, themes, ideas, and feelings that must be read from beginning to end in order to fully experience the emotional resonance I set out to create.

With all of this said, there is an important note I would want readers to know, and I will steal it directly from the preface of a book I admire very much (Praying Drunk by Kyle Minor, Sarabande Books, 2014): “These stories are meant to be read in order. This is a book, not just a collection. DON’T SKIP AROUND.”

Q: How was the book's title--also the title of the last story--chosen, and what does it signify for you?

A: Early on in the writing process, I kept a list of stories I wanted to write—ideas that came to me and continued to resonate in my heart and mind. One of these ideas pertained to a sick little girl who had been introduced to the concept of reincarnation.

This story, "The Reincarnations", was the last story to be written for the collection. However, it was on my docket as “to be written” for a long time, and I soon realized I had subconsciously infused the theme of reincarnation into each of the stories.

Originally, the manuscript had a completely different title—The Cost of Love. The original title sprang to my mind in 2015 when I started taking story writing seriously.

There was a thought, like a bolt of lightning, that entered my head: The cost of love is the pain of loss. This thought gave birth to most of the stories in The Reincarnations, and it is also a major theme running through the book.

But The Cost of Love was a very different book, and it contained different stories—ones I chose to never show anyone, or ones that I didn’t feel belonged in a collection. Eventually, the manuscript took on a new shape and tone than the one I had originally set out to write. Thus, The Reincarnations came into existence.

Very recently, my publisher, Montag Press, informed me that one of the stories in The Reincarnations had been chosen to be adapted into a one-act play by the playwright David L. Williams. The story he chose to adapt is called “The Al Capone Suite”, and this is the story where I implanted the sentence “The cost of love is the pain of loss.”

Last week my publisher sent me David’s adaptation, and he decided to title it The Cost of Love. I found this very serendipitous because I never shared with anyone my book’s original title. I believe that things have a way of coming full circle, and this is a prime example.

A: Quite simply, I want readers to feel. In the case of this book: Heartache. Longing. Yearning.

There is a Japanese phrase to which I am partial: Mono no aware. The best definition for this that I have found is: the ephemeral nature of beauty – the quietly elated, bittersweet feeling of having been witness to the dazzling circus of life – knowing that none of it can last.

A: Montag Press is also publishing my debut novel, Coil Quake Rift, which is about love, loss, and alternate realities after an earthquake in Los Angeles. I anticipate getting notes from the editor in approximately one month, and then we will begin the editorial process before getting the book ready for publication in early 2021.

However, my creative writing has taken a much different turn in the past year and a half. When I began submitting Coil Quake Rift to publishers in 2019, I started working on a young adult novel, a complete change in direction. I wrote three drafts of that book—I plan on five or six drafts—and I have two other ideas for YA novels that are fully crystalized in my mind but that I have not yet started writing.

After Coil Quake Rift is out in the world, I plan on committing to these young adult books and seeing where they take me.

A: You can purchase your copy of The Reincarnations: Stories here: