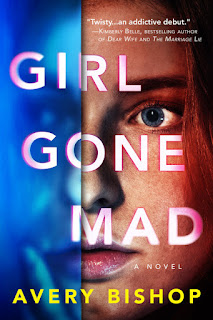 Q: How did you come up with the idea for Girl Gone Mad, and for your character Emily?

A: Part of the answer lies in the fact that the title was actually chosen first, before I had even the slightest hint of what the overall story or characters would be (that's answered below). But once I did have the title, I ended up pursuing the pre-made cover section of one of the designers I use for my self-published work, and I found a cover that I really liked.

The design had a sort of Megan Abbott quality to it (for her US covers, at least), with what looked like a girl in a floral dress; her face was mostly cut off at the top of the cover, but it was clear that she was young, maybe high school age.

And so I ordered it with the title I'd come up with, thinking it would be good to have once I eventually wrote the book (at that time I'd planned to self-publish it), but now I needed to come up with an idea. I knew I wanted to write an adult suspense novel, but the cover lent itself more to YA.

And so I thought: Hmm, what if the story covers both? What if there's a present-day story that focuses on the main character and her friends when they're adults, but there's a backstory from when they were younger?

Sometimes ideas come out of nowhere fully formed, and sometimes I let half-formed ideas sit and congeal for a while.

As it's been a couple of years now, I forget exactly what the initial idea was outside just the title, but once I realized that the story would be about a group of women who used to be best friends and how in middle school they bullied the new girl to her breaking point and so now the new girl was maybe or maybe not back for revenge, things started to progress from there.

For a long time I worked in the mental health field, so it was pretty natural to make the protagonist a therapist. Emily's character grew from there, how her guilt from what happened had directed her life and closed her off from others, and so when the mysterious deaths start to occur and she thinks Grace Farmer is involved, she's driven to learn the truth.

Q: There are various references in the book to Lord of the Flies. Do you see this as a female version of that story?

A: Yes and no. Yes because there are certainly themes that lend themselves to Lord of the Flies, but no because I don't want to act like it's even a close comparison. I think Lord of the Flies is a masterpiece, while my novel ... well, it's a suspense romp. It's meant to be read for fun.

Sure, there are underlying themes, and if readers come away with certain emotional reactions, great, but I definitely didn't set out to write anything too heavy-handed.

A: Many years ago I was in NYC for a business trip and I met up with a friend of mine who works in marketing at a major publishing house.

We got drinks at a bar near the Ed Sullivan Theater, and we talked about books and movies and at one point we discussed the ongoing trend of suspense novels that had "girl" in the title and I made some crack about how I'd always wanted to write a book like that and my friend turned to me all serious and said, "You should."

So that interaction of course stuck in the back of my mind, and one day the title Girl Gone Mad came to me, and I checked Amazon to see if it had been used before and was pretty shocked to learn that it hadn't.

And, well, the novel eventually evolved from there. After all, it wasn't just writing a book and sticking "girl" somewhere in the title; I wanted to make sure the book earned the title.

Plus, I like how the "girl" and “mad” in the title can be read in different ways. Does the "girl" signify Grace Farmer, who was bullied in middle school and who may or may not be back for revenge because she’s gone “mad”? Or does it signify Emily, who through the book starts to question what is real?

Q: You've written many other novels, but you chose to write this novel under a pseudonym. Why did you make that choice?

A: Most of the books I've published have been straight-up thrillers. There was a literary novel I'd published many years back, what is probably one of my favorite of the novels I’ve written, and it's probably the worst-selling of all my titles.

Why? Well, I believe because it's a novel unlike my other novels, and so most of my readership isn't interested in it. I'm certainly not the first writer to use a pen name when dabbling in another genre.

Of course, as suspense and thriller are very closely aligned, I probably could have published Girl Gone Mad under my name but felt it was best to let this novel stand by itself. Plus, it gives me the opportunity and freedom to write and publish even more titles in the future: suspense novels under this gender-neutral pen name, and thrillers under my own name.

A: I'm currently wrapping up copy edits on the next Avery Bishop novel. It's called One Year Gone and is about a 17-year-old girl who goes missing. The police eventually deem her a runaway.

A: I recently read a very short book called Sisters by Daisy Johnson. I liked it a lot, and I recommend others check it out.